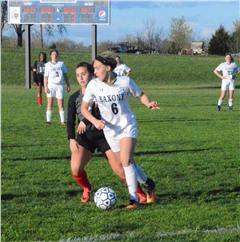 Before entering Saxony Lutheran as a freshman, Emma Brune had already witnessed what success looked like on the court and field from watching her sister and former Crusader, Maddie Brune.

As a member of Saxony’s girls soccer team, Maddie was a three-time Class 1 All-State selection and was named the Class 1 Player of the Year in her senior season in 2016.

As a member of the girls basketball team, Maddie helped lead the team to two final-four appearances and the 2016 Class 3 State Championship game where Saxony fell to Strafford by four points at 50-46. She also helped Saxony capture four-straight Class 3 District 2 titles in her high-school career.

Heading into her first year at the high-school level with Saxony, Emma’s goal was to be able to make an impact on the varsity level for both teams. It’s safe to say she accomplished her goal.

As a member of the girls soccer team, Emma led the Crusaders in goals [25] and assists [13] to earn Class 1 first team All-State honors as well as be named the Class 1 Co-Player of the Year. She also helped lead the Crusaders to the Class 1 District 1 title where they fell to (eventual) state champions St. Vincent.

“Not many people get a freshman coming in that has the caliber to be player of the year,” Saxony girls soccer head coach Chris Crawford said. “You hope for freshman of the year, but player of the year — it’s pretty incredible. That’s a testament to how hard she works — not just this year, but growing up and working on her skill.”

The difference for Emma from middle school to high school sports was mainly the pace of the game and also having to practice on a daily basis.

When Emma first heard the news she was actually surprised at first, but then she realized hard work does indeed pay off.

Emma received the call from Coach Crawford about being named player of the year when she was on break during a basketball camp for point guards in Alabama.

Earning the honor player of the year for the girls soccer team makes it three years in a row now where a Saxony player has earned the title.

“It’s pretty awesome [to continue the tradition of winning player of the year for Saxony],” Brune said. “[My sister and I] kind of have a competition with it. It was good [winning the award].”

Brune explained the competition she has with her sister is built from the two constantly pushing each other.

“She’s always on me about everything, and we just compete with each other and push each other to be the best we can be in everything that we do,” Brune said.

In her first season as a member of a varsity team with the girls basketball team, Brune played and started in all 30 games, averaging 10.4 points, 1.5 assists and 1.6 steals.

Heading into the season, Brune and her teammates felt like people were skeptical as to what they could accomplish since Saxony graduated eight seniors from last year’s second-place team.

Brune and the Crusaders proved those doubters wrong by winning the Class 3 District 2 Championship with a 72-47 win over Arcadia Valley. Emma was second on Saxony in scoring with 15 points — 12 coming from 3-point range.

Saxony advanced all the way to the Class 3 State Quarterfinals, but fell to Whitfield 44-37 to miss out on making the final four.

“Maddie told me that Emma was better than her, but she would never let Emma hear that,” Coach Crawford laughed. “So, I don’t know that she’s better yet, but she’s very, very technical and is pretty close already.

“Some times as a coach you just get lucky to have really good players — all those girls last year and then getting Emma, and this freshman class is very talented. I just feel lucky to be a part of that.”

Because Coach Crawford is an assistant for the men’s basketball team in the winter season, he only saw Brune play a handful of times. When he was finally able to watch her, he first noticed her fearlessness, and then saw her confidence grow as the season went on.

“When Emma’s confident on the soccer field — that’s not good for other teams,” Coach Crawford said. “Just to get her to a point where she’s playing where she knows, ‘Hey, I can be the best player on the field if I want to be.’ I think she started getting there towards the end of the year in basketball, and then in soccer it didn’t take long for her to get there.”

Coach Crawford went on to say as a coach it is special when one can have a player of Brune’s caliber because it makes his job that much easier.

Early in the season, there were moments when Coach Crawford wanted to point out something to Brune, but he found out there was no need.

“I stood up to say something to her, and she looked at me and showed me that I didn’t have to say anything,” Crawford laughed. “When you have a player that knows exactly what they’re going to be told in what happened — that makes it easier on me and lets me know she can handle her own. Let’s watch some other things and see how we can fix that.”

Heading into her sophomore season, something Coach Crawford wants Brune to improve on besides intricacies in her game is to be comfortable in a leadership role for the team.

Coach Crawford explained Brune has the ability and there were times when she had to step up because the team was missing a vocal leader.

“There were a few times where Emma stepped up and said, ‘You know what, this is enough. This is what we need to do,’” Coach Crawford said. “Not having to prod her to do that and just step up and feel comfortable being a leader in that group — getting player of the year means you’re probably a good leader.”

Emma says she is ready to expand her leadership role in year two for both teams. She is also excited to hopefully get revenge on the teams that ended her freshman seasons.