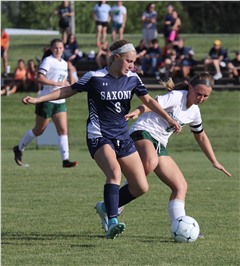 The girls soccer all-state teams were announced last week as Cape Notre Dame, Jackson and Saxony Lutheran each had several players listed as well as earn top honors in their Class.

Earning the top honor in Class 1 for Saxony was sophomore midfielder Emma Brune, who was named Co-Player of the Year for a second-straight time. She shared the honor once again with St. Vincent senior midfielder/forward Corin Carroll.

Brune is now the first player in Saxony history to win the award twice and also continues the streak of a Crusader earning the honor since 2015.

Brune was able to do so by scoring a career-high 30 goals along with a career-high 20 assists, both team highs. She also became a two-time first team all-state selection along with senior forward Laurel Mueller.

Mueller earned all-state honors each season throughout her career at Saxony, being named first team in 2017, second team in 2016 and honorable mention in 2015.

Mueller paced Brune this season scoring wise with 18 goals (second on team) along with dishing out 10 assists (third on team).

Senior goalkeeper Ashley Fritsche became a two-time all-state selection by being named to the second team this season, the same team she was named to in 2017. She recorded 109 saves and five shutouts through 2,036 minutes in the net this year.

Makayla Mueller was second on the team in assists behind Brune with 17 while scoring 11 goals.

Even despite not making the state playoffs by losing to St. Vincent in the district title game, Saxony finished ranked third in Class 1 with an overall record of 15-5-1.

Notre Dame came one goal shy of winning its second-straight Class 2 State Championship by falling to Christian 1-0 in this year’s title game.

The second-place Bulldogs had six players earn Class 2 All-State honors with four being named to the first team and two to the second team.

Notre Dame’s first-year starting goalkeeper senior Grace Powderly was named the Co-Goalkeeper of the Year while also garnering first team all-state honors. This is the second-straight year a Bulldog has come away with the award.

Defensively, senior Alaina Baumgart and junior Abby Wilson were each named first team all-state for a second year in a row.

Junior midfielders Bailey Beussink and Livia Wunderlich were named to the second team.

For Jackson, senior forward Lauren Welker became a three-time Class 4 All-State selection following the Indians historic season of finishing in the final four for the first time in school history.

Welker was named to the first team for a second-straight year as she was second in goals at 18 but first in assists with 16 for Jackson.

Earning all-state honors for the first time in their careers was junior forward Natalie Miller and junior midfielder Mikala “Mik” Liley, who were each named to the second team.

Miller tied with senior Grace Pehle for most goals at 20 with nine assists while Liley recorded 16 goals and finished second behind Welker in assists at 10.