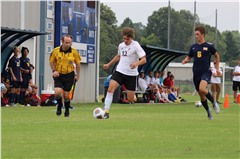 The Jackson soccer team has started off its 2017 season much like last year by being undefeated (6-0) and winning the Notre Dame Soccerfest.

The Indians have outscored their opponents by a total of 27-10 with scoring multiple goals in all but one game, which was the championship match of the soccerfest.

Jackson faced host Cape Notre Dame (5-2) to see which team would take home the title. The Indians had a total of eight shots on goal against the Bulldogs, and senior Desmond Morris was able to get one of his three shots in for the score off a corner kick.

This was thanks to fellow senior Kaleb Irby, who was able to get the ball to Morris for the assist.

“We had some pretty good opportunities at the beginning of the game that we didn’t put in the back of the net,” head coach Zach Walton said. “We didn’t panic — I thought we did a good job of staying in there and battling and putting hard pressure on them.”

Jackson kept Notre Dame scoreless as senior goalkeeper Carter Gentry was credited with the first shutout of the year for the Indians to win their second-straight Notre Dame Soccerfest.

“It was pretty awesome to win that thing this year,” Coach Walton said. “I think last year a lot of people expected us to win it. This year we knew it was up for grabs. To see our kids come out and compete and play hard — a little bit of this is a rebuilding year.”

Jackson lost seven seniors to graduation heading into this season, including the team’s leading scorer from 2016 in all-state honoree Josh Scholl.

Coach Walton said this is a rebuilding year, though, because he is having his team learn a new system as well as ask players to play in different positions from what they did a year ago.

“We’ve got some juniors that didn’t play any varsity last year that are stepping up and playing for us,” Coach Walton said. “They’re buying in really well right now, and they’re working hard, so I’m proud of those kids so far this year.”
Coach Walton said the backline was a question mark for 2017 since spots needed to be filled, but he was also able to center things around returning starter senior Grayson Ward.

“[Junior] Seth Essner has done a great job, played [junior varsity] for us last year,” Coach Walton said. “He has stepped in and he’s filling a big role on that left side for us. [Senior] JT Meinke, who played in the midfield for us last year, we needed him at the back.”

Coach Walton said without even hesitation Meinke has been successful in his new role, and without these players, Walton said his team would be “hurting real bad.”

Jackson’s returning leading scorer is senior Justice Crosnoe, who is currently second on the team in goals with 10 after completing the hat trick with three goals and two assists in a 6-4 win over Farmington (7-2).

Leading the Indians in goals this year is Morris with 11, and Coach Walton said he knew these two seniors were going to step up like they already have this season.

“They are seniors, and they have to put a little more weight on their shoulders, and they’ve done a nice job of that,” Coach Walton said. “They’re just having to be the senior leaders as returning starters — same with Grayson, JT and same with Brodie [Martin].”

Jackson will play in its second tournament of the season starting Friday, which is the Parkway Tournament where the Indians lost their first game in 2016.