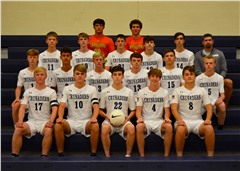 No program has been able to keep the Saxony Lutheran boys soccer team from winning the Class 1 District 1 Championship since 2013. The Crusaders were even able to reach final four for the first time in school history three years ago.

The one team standing in Saxony’s way from making the final four the last two seasons has been Principia, which defeated the Crusaders 1-0 in 2018 and 3-1 last season in the quarterfinals. Principia went on and advanced to the Class 1 state title game each time as the program won last year’s state championship.

“We have a young team [coming back] on paper, but we are a very experienced team,” Saxony’s third-year head coach Chris Crawford said. “Most of our freshman last year played big varsity — some of them played 80 minutes a game. We’ll return two of our four captains from last year. One is an all-state player and one has that in potential in Paul [Adams] and Quinn [Steffens].”

Saxony had a total of four players from last year’s team garner all-state honors as two were on the first team in senior midfielder Paul Adams and junior defender Zander Zieba. Adams was named first team all-state following his sophomore season and helped the Crusaders reach the final four his freshman year.

“Some people don’t know this trivia, but Paul has actually scored the most goals in a quarterfinal ever for Saxony,” Coach Crawford said. “He has two — the two that sent us to state his freshman year. He continues to get better every year and every day really, which is incredible because he’s already very good.

“His leadership is getting better, and his desire is out of this world. If you get somebody that can combine all of that stuff, it’s a dangerous combination.”

Saxony also graduated its starting goalkeeper Matt Wydra, who was named all-region after his senior campaign. Wydra and defenders like Zieba and Richey shutout seven teams including two coming in districts for the Crusaders to outscore their opponents 5-0.

Going back to last year’s freshman, who are now sophomores, that Coach Craw-ford had play extensively in 2019 said that they now look like upperclassmen. Those players are Jace Boland, Max Richey, Paul Kauffman, Noah Smith, Kory Siebert and Aaron Zoellner.

“I was on them last year nonstop about kind of growing up and really realizing that at Saxony, we don’t have freshman,” Crawford said. “You’re either playing or you’re not playing, so there’s no freshman. They have now stepped up and look really good.

“I tell them all the time, ‘We didn’t get beat by Principia. We lost to Principia.’ We didn’t play our best game, and I think some of that had to do with the maturity on the team last year. It wasn’t their fault by any means, but we didn’t have the sort of intensity every day that we needed.”

Before school started last week, the team had been practicing twice each day at 5 a.m. and 5 p.m. That changed as Saxony started the school year on Thursday, but Coach Crawford has received multiple text message from players asking if they can still practice twice a day. “There’s just a different sort of intensity about them,” Crawford added.

This has made coaching easier for Crawford since they are able to get through drills quicker and more efficiently with how his players have been focused.

On the pitch, Crawford said his team is going to be able to maintain possession of the ball more this season and hopes to turn those possessions into plenty of scoring opportunities.

Zoellner and junior Logan Pruitt are battling for the starting goalkeeper position, and Crawford said either of them could start on any given day. Playing infront of them in the backline will be defenders Zieba, Richey and Kauffman.

Midfielders for the Crusaders will be Adams, Steffens and Boland while players like seniors DJ Dreyer and Milo Greenfield, juniors Austin Kirn and Collin Tarry and Smith will also factor into the starting 11. Freshman Luke Eggemeyer and Owen Tarry should also see significant time.

“I like to say that we pride ourselves on our defense for sure — we don’t give up a ton of goals in general,” Coach Crawford said. “I think we’re going to be able to keep the ball and possess it more and make teams chase us and let us dictate the tempo of the game.

“We’re working on playing a more exciting style, getting forward and putting pressure on. This is not going to be the Saxony teams in the past where we’re sitting back and defending. We’re going to take it at people and make them truly beat us.”