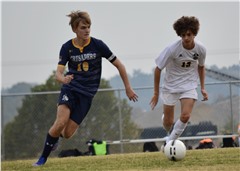 For the past six seasons, the Saxony Lutheran boys soccer team has been able to win the Class 1 District 1 Championship and even reached the final four in 2017. However, the Crusaders have been bumped up to Class 2 District 1 due to MSHSAA’s success multiplier for private schools.

In the latest Missouri Soccer Power Rankings, Saxony (8-2) was ranked No. 5 overall with C2D1 opponent and district tournament host Perryville (8-2) being ranked No. 1. Last week on Monday, Oct. 5, the Crusaders and Pirates faced off in Perryville as Saxony came away with a 2-1 win (4-3 PKs) — Saxony was even without their leading goal scorer, sophomore Jace Boland.

Boland returned for the Crusaders after their 1-0 win over Cape Central to help lead a spread offensive attack in which Saxony defeated Class 3 Festus 6-0. Boland was one of the six Crusaders to score a goal in the contest.

One of the main reasons why Saxony was able to win so handedly is because it was able to dictate how the match was played due to possession.

“We drill it — We do a lot of things working on our first touch and the way that we want to play and the style that we want to play,” Saxony’s head coach Chris Crawford said. “We kind of look at ourselves and say, ‘We know we’re not speed burners all over the field, but we know we have good technical skills.’

“Playing the ball over top and trying to win foot races isn’t going to be good for us, but if we can play disciplined and make their play predictable it makes it easier for us. Then we keep the ball and can spring it anytime we have to, but we can also go 10 minutes at a time where we keep the ball and make [teams] defend us for a long time.”

Boland didn’t start the match as he was worked into the lineup and scored his team’s fifth goal off an assist from Saxony’s two-time, all-state senior Paul Adams in the 35th minute.

The Crusaders scored their first two goals in the first six minutes as senior DJ Dreyer added the first while sophomore Mike Hasz booted in the second goal at the six-minute mark.

The final goal of the match was scored in the 49th minute during the second half as junior Collin Tarry gave Saxony its final lead of 6-0 over Festus. Coming up with assists along with Adams was Dreyer and sophomore Max Richey, who finished with a game-high two.

“We’re not a one-man show — we have a lot of guys that have some goals,” Coach Crawford said. “We don’t have one or two that have a lot, so that’s what I’ve always wanted out of this program. You’re never going to turn down a 30-goal scorer, but it makes it much harder [on teams] when you can’t just key on one guy.

“Tuesday night Mike Hasz scores against Cape Central, Milo [Greenfield] scores against Perryville [Monday] and six different people score tonight. Who do you contain? We’re just much more solid as a team chemistry wise that we’ve been in awhile, so I’m happy with that.”

Defensively, sophomore goalkeeper Aaron Zoellner recorded six saves against Festus in order to help the Crusaders record their fifth shutout of the season.

Helping Zoellner shut out opposing offenses this season are Saxony defenders such as sophomores Paul Kaufmann, Noah Smith and junior Zander Zieba. All of these players are returning starters from last fall.

Along with five shutouts, the Crusaders defense hasn’t allowed an opposing offense to score more than two goals for a total of six allowed this season. Saxony’s two losses on the year were to Class 4 Jackson (9-1) 1-0 and Class 3 Cape Notre Dame (8-0) 2-1.

“Our backline is ridiculous — they might be one of the best backlines in Southeast Missouri,” Coach Crawford said. “[Kaufmann] is an elite-level guy, and I’m biased but he’s probably the best defender one-on-one in Southeast Missouri and maybe even all of Missouri. He and Zander are both top-level guys. Then you don’t want to go to Noah’s side because he’ll cross you with a tackle.

“[Zoellner] has been a beast back there, and he came off the field and said he was bored today. If he’s bored, that means everybody else is doing their job, so I would rather he come off and tell me that everyday than for him to come off and say, ‘Man, I’m really tired.’”