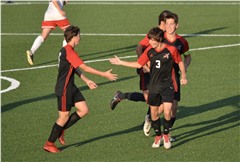 The reigning SEMO Conference and Class 4 District 1 Champions Jackson boys soccer team has only lost one game this season and is currently 11-1-2 overall with a conference record of 4-0.

“I knew we had the potential to do well this year — I just didn’t know how well we would mesh together knowing that we were going to have some younger kids playing with some seniors,” Jackson Head Coach Zach Walton said. “It’s been amazing. Those seniors have really taken to those younger players and made them a part of the team.”

Heading into the season, Coach Walton was also worried about the lack of experience these freshman had at the varsity level. One positive is that he said several of these players have been on soccer teams together ever since they could first play sports.

Freshman Chalon Domian scored a game-high two goals and recorded one assist against the Knights on Sept. 27. Senior Colten Seyer added the other goal as fellow senior Logan Gier had an assist.

Against Sikeston on Sept. 25, senior Seth Essner added one goal while freshman Brayden Stowe scored the other while freshman Mason Grindstaff came up with an assist.

“Defensively we have a lot of experience back there — those kids have been playing since they were little and are good defenders,” Walton said. “We knew coming into the year we could probably keep a lot of games really close. The question was what we were going to be like in the final third. Some of those freshman, fortunate for us, are natural forwards and natural offensive players.”

Jackson has recorded a total of 10 shutouts this season  and has yet to allow a single goal by a conference opponent. Behind the Indians defense is sophomore goalkeeper Luke Mirly, who is in his first year as a starter.

“He got to see a little bit of varsity last year, and he’s a good player back there,” Coach Walton said. “… As a sophomore coming in and having to start on varsity sometimes can be a little nerve-wracking when you’re in the goal because you feel like everything’s on your shoulders.”

In the Parkway Tournament on Sept. 21 and 22, the Indians went 1-0-2 as they tied Parkway Central 2-2 to start the tournament, defeated Parkway North 2-0 and tied Parkway West 1-1.