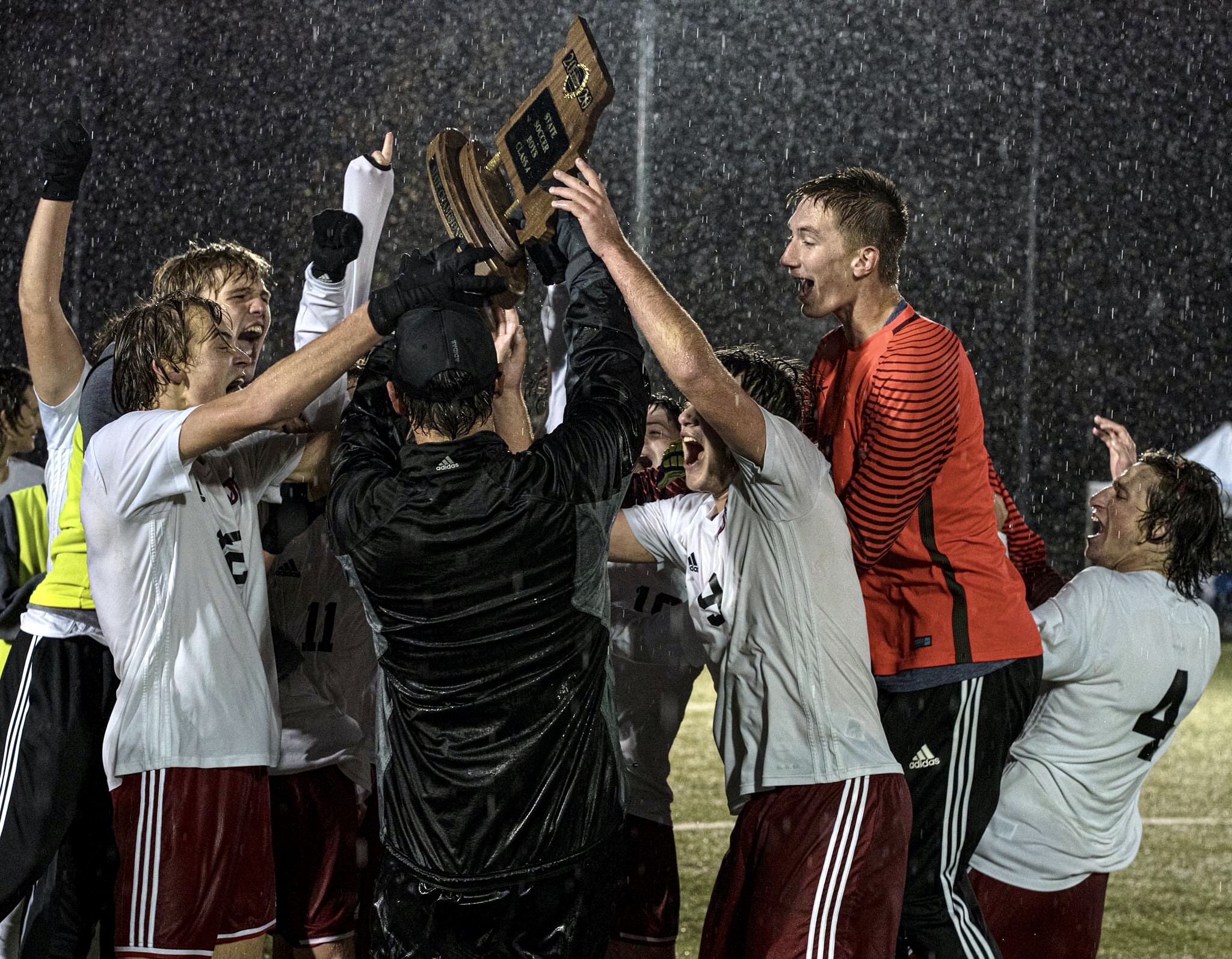 No boys soccer team in the state of Missouri played in more overtime matches this postseason than Jackson, and that’s exactly what the Indians had to do in their first-ever state championship game — play in overtime.

For the Class 4 state title Saturday night hosted in Springfield, Jackson (19-3) took on nationally-ranked No. 15 St. Dominic (23-2) that had won a total of five state championships heading into the contest. The Indians weren’t intimidated by any means, though.

On top of facing one of the best teams in the nation, Jackson also had to deal with a constant downpour of rain for most of the game, but nothing was going to stand in the Indians way of making history that night.

The Crusaders finished with 12 overall shots as four of them were on goal, but Mirly made the saves as he and the Indians kept the ball out of the back of the net for all 83 minutes.

“St. Dominic is an amazing team, and they have some really talented players there and are really a well coached team,” Jackson head coach Zack Walton said. “When you’re playing against really good teams, your defense has to be stellar. I thought our defense did a phenomenal job keeping those guys shutout for that long — they were really determined.”

Walton went on to say it wasn’t just his backline defenders and goalie keeping the Crusaders from scoring, but it was nearly his entire team. Jackson had eight to nine or sometimes even 10 of its players defending St. Dominic’s offense, which meant midfielders like juniors Will Essner, Mason Grindstaff, Brayden Stowe and senior Tyson White were playing both offense and defense throughout.

“We were trying to keep eight guys behind the ball, and that meant midfield was going to have to run a lot,” Coach Walton said. “They were going to have to work like crazy to get set offensively then back on defense every single time up and down the field. Hats off to those guys for really digging down deep.”

St. Dominic was even granted a penalty kick in the 43rd minute of the match, which was taken by senior forward Jimmy Doherty. The attempt went far right of the goal, but Mirly would’ve saved it anyway had the ball traveled toward the net.

Another reason why the Indians were able to shutout the Crusaders was because of Mirly positioning members of the defense around the goal whenever St. Dominic attempted a corner kick.

“Luke did a phenomenal job in that goal directing traffic in the back, especially when you’ve got a lot of rain and the ball is slick and wet — a lot of things can happen,” Coach Walton noted. “Couple of times [Luke] made a little mistake, but our defense was right there to clean it up and clear a ball from the back.

“It went the other way a couple of times, where I thought we might’ve made a mistake defensively and Luke came in big time and made a couple big saves for us. That’s what it takes — it takes a team to support each other and know we have each other’s back.”

Scoring the lone goal of the match was none other than Jackson’s junior forward Chalon Domian, who did so three minutes and 23 seconds into overtime. When one of the Crusaders defenders tried playing the ball to their goalie, Domian intercepted the pass and kicked it over the top of the keeper for the golden goal.

“Right before that what was huge was Will Essner won that head ball for us on that goal kick there,” Walton said. “It put them in a bind, and a ball they had to try to deal with in an awkward spot. Knowing that it’s overtime and you put pressure on them with Domian running at them — a little bit of pressure on some people causes a little bit of panic.

“Domian pounced on it pretty fast and was able to lift it over the keeper’s head in the back of the net for a state championship. That was a great finish — I mean really that was a great touch by Chalon. It was just a high-quality finish by a really good player.”

With this win, the Indians won four of their six playoff games in overtime including the Class 5 District 1 Championship, the quarterfinals and semifinals. There is one word Coach Walton used to describe his team being able to overtime matchups.