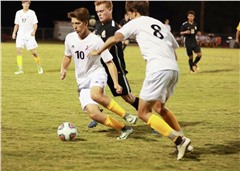 The Jackson boys soccer team advanced to 12-4 overall, 4-1 in SEMO Conference play after defeating Cape Central 4-1 on Oct. 4 at home.

This win came following the Indians losing back-to-back contests, one against Class 4 District 1 opponent Seckman at 4-2 on the road.

The Indians have now defeated Central in every meeting since Sept. 24, 2013, and Jackson junior Colten Seyer led the way with two goals in this year’s match.

Seyer scored the opening goal of the game in the 18th minute after senior Justice Crosnoe’s head shot deflected off the goal and right in front of Seyer, allowing him to kick the ball in for the easy score.

Jackson’s next goal came nine minutes later in the 27th minute when Indians senior Desmond Morris kicked the ball to the far right of the goal with Central’s goalkeeper nowhere in sight.

The Tigers answered the Indians with their lone goal of the match with less than five minutes to go in the first half. Central sophomore Nate Albertson made it a one-goal game when he was able to kick the ball past Jackson senior goalkeeper Carter Gentry to the far left.

Central had two more shots on goal in the final minutes of the first 40, but Jackson’s defense led by senior Grayson Ward were able to hold the Tigers off.

“I thought our defense did fine there,” Walton said. “Grayson, especially in the first half, came up with a couple big one-on-one saves. Once our defenders started making some smart, short passes and playing possession — they just started it for us.”

This allowed Jackson to have more opportunities and to break Central’s defense down, and this proved to be vital for the Indians in the first six minutes of the second half.

Jackson scored its final two goals in this time span as Seyer starting things out with a head shot for the goal to take a 3-1 lead.

The fourth and final goal of the game for the Indians was scored by junior Caleb Dameron, who kicked the ball in after Morris received the ball from a Crosnoe throw-in.

Morris nearly scored the goal himself but his shot was deflected by Central and went in Dameron’s direction.