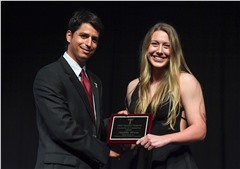 Once a Crusader now a Trojan, Troy women’s soccer junior Maddie Brune is continuing to be one of the top leaders of the program she is a part of.

Brune was the recipient of this year’s Troy Strength of Character Award, which is awarded to a student-athlete who, “consistently exemplifies the traits of a true leader and represents Troy University with honor and pride.”

For Brune, it was an honor for her to just be nominated for the award, especially since fellow athletes were able to have a say.

“I was kind of shocked when I won it, but I’m super humbled and honored,” Brune said. “In previous years it was just the advisory committee that chose the winners, but now it was both [the athletes and the committee]. It was cool knowing my peers had a role in it, too.”

Brune has served as the women’s soccer team’s captain for the past two years and has started a total of 53 games for the Trojans. She serves as one of the team’s defensive midfielders, who has helped lead Troy to 20 shutouts throughout her career.

The Trojans have gone 20-34-6 overall during Brune’s time on the team with a 13-15-2 in conference play. She was also one of the team’s staples during the transition of a new head coach following the 2016 season.

“Troy’s soccer program has gone through a lot the past few years, and we kind of needed to revamp the program and change the mindset of the team,” Brune said. “I have been fortunate to be able to be at the forefront of that. I was made captain at a really young age as a sophomore, which has come with a lot of challenges. I think I have learned more lessons about life and people in these past three years.”

Brune is no stranger to adversity since she suffered a season-ending injury during her junior year with the Saxony soccer team. The Crusaders were able to win the Class 1 State Championship without her, but this set up a senior year to remember for Brune.

Brune helped lead the Saxony girls basketball team to a 28-3 overall and a trip to the Class 3 State Championship in the winter. The Crusaders ultimately fell to Strafford 50-46 in the title game, but it was also the program’s first trip to a state championship.

For Brune’s final season playing soccer at Saxony, it’s safe to say she went out with a bang. Brune was named the Class 1 Player of the Year and earned all-state honors for the third time in her career, while also helping the Crusaders to win a second-straight state championship.

“That’s one of my biggest accomplishments I think in my entire life and something that I’m still super, super proud of,” Brune said. “I definitely think that injury gave me a new perspective, which is why I think that senior year I hit the ground running.”

Saxony’s girls soccer team finished 21-1 overall that season, and Brune can recall how her team felt leading up to the title game against Trinity Catholic.

“I think that final game our senior year we were just like, ‘This is it for us — this is our last chance, and we’re not leaving without a first-place finish,’” Brune said.

Brune took this thought to heart and was able to score the game’s only goal for Saxony to win 1-0 as she scored off a corner kick in the final 40 minutes.

Brune and the seniors on her team are regarded as one of the top athletic classes to ever come through Saxony, and she said her teammates were one of the reasons why she was able to adjust to playing at the college level.

“They taught me how to be a good teammate and taught me what it means to really play for the girl next to you,” Brune said. “Even if you’re not having the best day, knowing that she wants to win with everything she has — you have to play for her.”

After one year at Troy, Brune was joined by one of her former Saxony teammates Grace Mirly, who only played softball her freshman year but joined the soccer team this past season.

“It’s crazy because Grace is a dual-sport athlete, which is insane especially at the Division-I level,” Brune said. “… Grace is an incredible teammate and athlete. The positivity she brings to our team is unreal.”

Brune said one of the key reasons why the Troy soccer program was able to change its culture was because of Mirly, who has also been one of Brune’s best friends since they were young.

Brune’s younger sister, Emma, will be playing soccer at Southeast Missouri State, and she has already been named Class 1 Player of the Year back-to-back after Maddie earned the honor.

One could easily say Brune has become a role model for Saxony players, like Emma, to look up to, and that’s something she takes very seriously.

“When I was their age, I had girls in college or older within my [soccer] club that I looked up to,” Brune said. “I wouldn’t be the player I am today or have some of the values that I have without their influence. Being able to have that influence on other people is huge, and I just hope that what I say or what I do — the actions that I take — can reflect on them in a positive way and help them succeed in whatever they’re doing or get to where they want to go.”