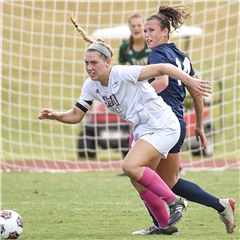 Sunday was the second to last home game of former Saxony Lutheran Crusader, current Troy Trojan soccer senior midfielder Maddie Brune’s collegiate career, and she certainly made it one to remember.

Brune scored a single-game, career-high two goals on senior day for Troy to defeat Sun Belt conference opponent Georgia Southern 4-1 and advance to 9-2-3 overall and 4-1-1 in Sun Belt play. The Trojans are now tied for first place in the conference standings with South Alabama (9-3-2, 4-1-1).

Brune’s first goal came in the 21st minute off a corner kick from fellow senior Kiersten Edlund, as she connected with the ball mid air and nailed it into the back of the net to give the Trojans a 2-1 lead.

Brune scored the final goal of the match with another pass from Edlund off a free kick when Brune headed the ball past the goalkeeper for the score. These two goals were her first of the season as she also has four assists for a total of eight points.

Troy has four more regular-season games until the Sun Belt Conference Tournament, which will kick off Nov. 6 at the Foley Sports Tourism Complex.