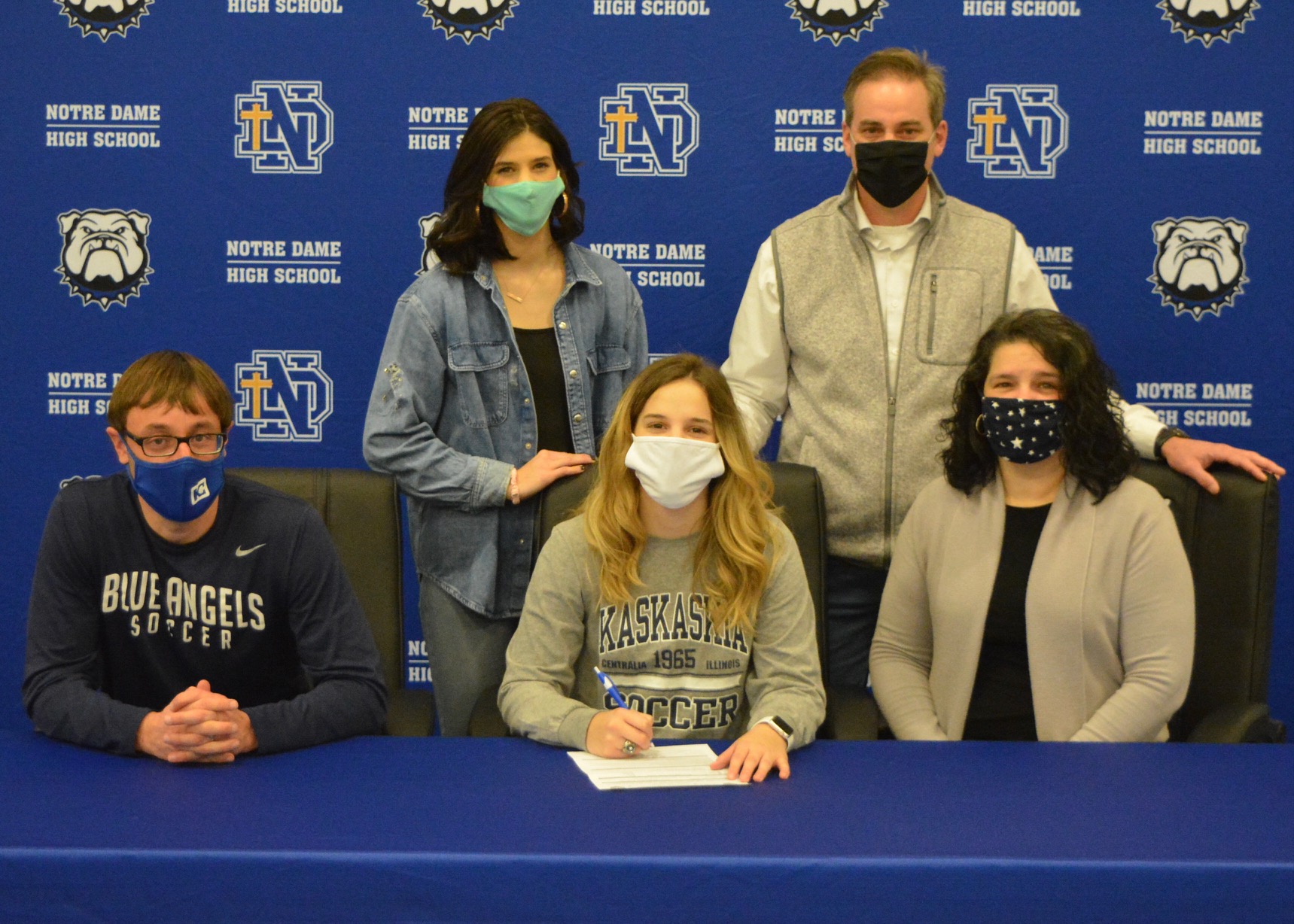 After helping the Notre Dame girls soccer team win its second-ever state championship in 2019, senior forward Hannah Miller was excited to defend said title her junior year. However, the world had other plans as the coronavirus pandemic forced MSHSAA to cancel the 2020 season entirely.

Barring any unforeseen circumstances, Miller will now be able to defend that state title with her fellow Bulldogs as their returning-leading scorer from two seasons ago. Miller was able to score 60 points (career-high 24 goals, 12 assists) on a state championship team that featured three Bulldogs who went on to play in college.

“Megan is definitely a part of the reason I’m the player I am today because working with her made me play better and reach to my limits,” Miller said. “She helped push me and everything, and it was nice because I helped push my other teammates, too. Being so young on a team like that with such great leaders helped me become the person I am today.”

After high school, Miller will be following in their footsteps and carrying on the tradition of a Notre Dame Bulldog playing women’s college soccer as she officially signed with Kaskaskia College on Jan. 22.

“For me, signing with Kaskaskia gave me more security because with everything going on, I was scared that this would be my last season, and I didn’t get my other season,” Miller said. “Signing helps me know that I’m going to have more seasons and get to make more memories.”

Looking back on her years as an underclassmen at Notre Dame, she said it was nice having back-to-back state championship appearances and winning it as a sophomore since last season was taken away from her.

The Bulldogs fell to Christian 1-0 in the 2018 Class 2 state title game as they didn’t have Wilson, who tore her ACL in the semifinals. As a freshman that season where Notre Dame finished 23-4-1 overall, Miller produced a total of 39 points with 11 goals and a career-high 17 assists.

One year later with Wilson back and the duo of Heisserer and Miller with one year of experience under their belt, Notre Dame only suffered one loss (26-1-1) and defeated Visitation Academy 4-0 for the Class 2 State Championship. Miller scored one goal and dished out one assist in the title game as Heisserer led the way with two goals.

Fast forward to last spring when no high school team in the nation was playing, Miller continued to be a leader by reaching out to her teammates to see if they could get together while following COVID-19 protocols before quarantine.

Notre Dame and other SEMO Conference opponents Jackson, Saxony Lutheran and Poplar Bluff all participated in the SEMO Conference Friendlies Tournament June 25-26. The Bulldogs finished 1-1 as they beat the Crusaders but fell to the Indians, while Miller scored a goal versus Saxony.

“It was really nice being out on the field,” Miller said. “We had never played with the freshman from last year, so that was really nice, too. Just being able to be a team again and seeing the girls — that’s all that really mattered.”

Miller’s favorite part about soccer is the relationships she creates with players through it as she has friendships with people ranging from here in Cape Girardeau County all the way up to St. Louis. “It’s crazy all of the people I know just from playing this one sport. They’re just great connections I’ll always have.”

During quarantine when she wasn’t with her team, Miller worked on her game as much as possible and was even kicked off three soccer fields while trying to practice. Thankfully now, though, Miller has been able to workout with her teammates during open-field practices.

Miller first started playing soccer when she was three-years-old and had her mother as a head coach for nearly five years in recreational league soccer, whom Miller credits as pushing her to be the person she is today.

Even though she’s a forward now, Miller stated she has played at about every position on the pitch except for goalkeeper. She said forward is one of her favorite position not because of the glory but due to the feeling of helping her team by scoring goals.

“[Heading into this season], my attitude towards the game has improved because starting with my freshman year, I wasn’t shooting very well and everything,” Miller said. “Over time working and working over quarantine, I’ve definitely gotten a better attitude of like, ‘This is going to go in. This pass is going to be perfect,’ and all that.”

Miller defined playing soccer at Notre Dame as being a part of a family because everyone knows how hard each other works towards a common goal. She also expressed every player has the other’s back, and they are always together because that’s what Notre Dame soccer is about.

Serving as Miller’s head coach for the past three years has been Ryan Schweain, whom Miller called “her favorite person.”

“He’s made me a better person No. 1 because I’m way less awkward now,” Miller laughed. “With the game, he always encourages us to do our best and lets us know if they’re something that we’re not doing.

Coach Matt Vollink is the same way, and he helped me with all of my foot skills. They’re both good at telling you when you need to step it up a little bit or, ‘Hey, you’re doing really well. I’m proud of you.’”