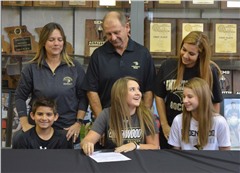 For Jackson senior Taylor Nelson, soccer runs in her family. Therefore, it was only natural that one day she would sign a National Letter of Intent to continue playing the sport in college.

Nelson did so on Nov. 14 with Lindenwood after verbally committing to the university her junior year.

This was an exciting moment for Nelson but also a nerve-wracking one since college will be a new chapter of her life. Nelson has faith Lindenwood is the right school for her, though.

“The Lindenwood program is supposed to be really awesome, and the new coach [Dave Musso] is really awesome,” Nelson said. “I’m anxious to get there, but I’m also nervous.”

Before Nelson committed to Lindenwood, she did look at other schools but was familiar with Lindenwood’s campus since she has played there before.

Nelson was also impressed with Musso’s coaching resume since he helped lead Quincy University to two conference tournament titles and 10 appearances in the NCAA Tournament before accepting his current position at Lindenwood.

“[Musso] is so positive — he’s really great,” Nelson said. “He really made me feel like I was super welcome with the team and everything. For me I think it was mainly the coaches [that made me choose Lindenwood].”

As a member of the Jackson girls soccer team, Nelson has helped lead the program to back-to-back Class 4 District 1 Championships and its first-ever state final four appearance last season.

Nelson has also scored a total of five goals and dished out 13 assists as the Indians have finished with a combined record of 36-11 overall the past two years.

“[Going to state] was awesome,” Nelson said. “I loved my varsity soccer team, and I loved that our community was so involved with it. That quarterfinal moment — there’s a picture of me that shows how exciting it was. Every time I go look at a video or a Tweet, it makes me blush. There was just so much support from everyone. I’m so glad that I got to be a part of it even as a junior.”

Nelson’s goal for her final year with Jackson is to return to state as a senior. The team returns all but two starters for this season after losing Grace Pehle and Lauren Welker to graduation.

Nelson’s parents, Heather and Paul, have pushed her in soccer and life to be the best person she could possibly be. Heather also happens to be the head coach for Southeast Missouri State’s women’s soccer team.

“My mom is super adamant about good character on and off the field, so I feel like them being so adamant about, ‘You’ve got to do this 100 percent,’ has helped me a lot in school and with friendships,” Nelson said. “They’re really supportive of me, but at the same time they always push me to do the best I can.”

One example of this would be when Nelson’s current coaches at Jackson tell her to do 25 crunches, Heather tells her to do 26.

It was a tough decision for Nelson not to attend Southeast and be coached by her mom. She would have also had a chance to play with her sister Jordan, who serves as one of the team’s defenders.

“I’m a home body, but at the same time I feel like there’s a lot of the world outside of Cape Girardeau that I don’t know,” Nelson said. “I didn’t want to have any conflicts with the team and players thinking that I only got a scholarship or I’m only on the team because of my parents.”

Nelson enjoys meeting new people and happens to love the city of St. Louis, so ultimately she’s happy with her decision.

Nelson will miss the Cape Girardeau area along with the people in it like Jackson Head Coach Justin McMullen, who also happens to be a good friend of the Nelson family.

“As an upperclassman now, I really try to let freshman know that not all seniors are big and bad,” Nelson said. “Coach Mac is intimidating, but he’s got a soft side to him. I really love getting to know the girls outside of soccer, and I don’t try to coach them but let them know what I think to do.”

Nelson said McMullen will always let a player know when they’re doing something wrong, but it’s not always in a bad light. He is also open to what his players have to say.

Since McMullen coached along with Nelson’s father, she knew him before he was “Coach Mac.”

“He has been my worst enemy, but at the same time even off the soccer field he has been there for me whenever I needed him the most,” Nelson said. “I really appreciate him for that.”

McMullen said it was a rewarding moment when he was able to watch Nelson sign her letter of intent. He said Nelson has a “very high” soccer I.Q. and knows she will be successful in the college ranks.

“There aren’t many things I can say to her that she hasn’t heard before, but as far as a player like that she makes everyone around her a lot better,” Coach McMullen said. “She’s been a joy to coach and I’m looking forward to her senior year. [The Nelson family] is a pipeline. I coached her sister Jordan her senior year and we’ve got another one coming through this year, so I’m looking forward to having coached three of the four of them.”

Heading into college, Nelson isn’t exactly sure what she will major in but believes secondary administration or education could be the path for her. One reason why is because of Nelson’s love for people, and the other reason happens to be a little obvious.

“I could see myself maybe as a coach someday like Mac,” Nelson said. “It would be so cool to like take another Jackson team to state or something, but at the same time my parents are coaches and they’ve kind of formed me into that type of person.”