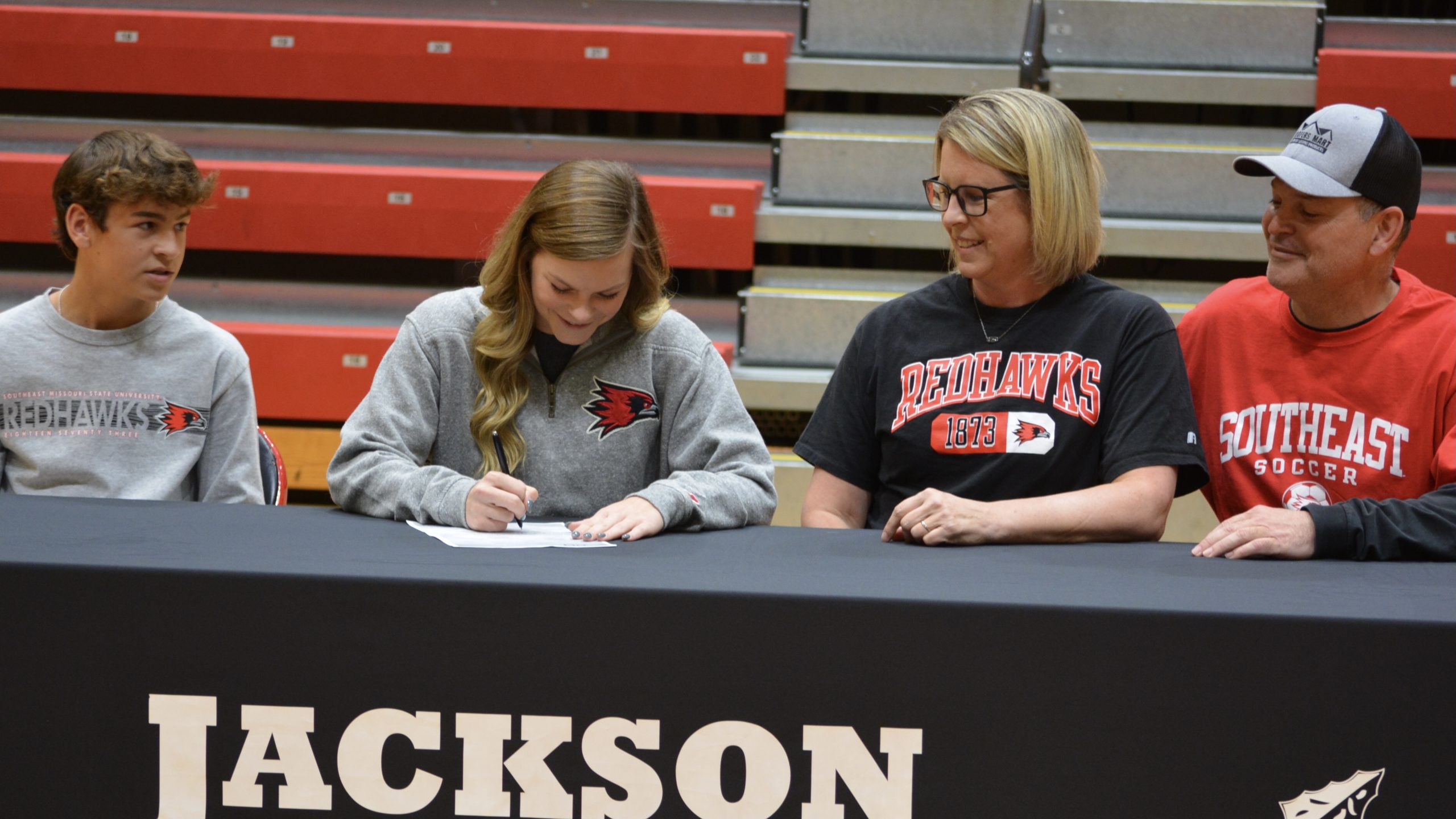 Even though Jackson senior Katelyn Miller has played soccer for most of her life, it didn’t become a dream of hers to play the sport collegiately until her freshman year of high school.

This was because at the time her older sister and 2019 Jackson graduate Natalie had aspirations of playing college soccer herself, which made Katelyn realize she would love to play soccer in college for another four years following her high school career.

Last week on National Signing Day, Miller fulfilled her dream by signing with Southeast Missouri State, which is a school she’s always had a desire to attend in the first place. Fellow senior Grace Crowden also signed with the Redhawks as she and Miller will join two of their former Jackson teammates Lauren Welker and Taylor Nelson at SEMO.

Along with Nelson and Welker, there are two more area players on SEMO’s roster in Emma Brune (2020 Saxony Lutheran graduate) and Megan Heisserer (2020 Notre Dame graduate).

“I love all of those girls,” Miller said. “It’s so crazy how a lot of the team is from here, and to be a bigger part of that and keep it going is awesome. Lauren and Taylor are so great — to get to play with them more seasons was a big part [for me signing with SEMO].

“I know Megan played with my sister, and they are super close. And so did Emma Brune, and I think I played one season with Emma on Southeast Missouri Soccer Club. They’re so nice — they’re so nice.”

“I’ve never gotten to work with Heather, but what my sister said about Heather is amazing,” Miller said. “I’ve loved pretty much every coach I’ve had at SMSC, and I know that’s because the Nelsons teach all of their coaches how to coach.”

Miller, who is a dual-sport athlete for the Indians, has only gotten to play two full seasons of soccer heading into her final high school season. This is because Miller’s junior year of soccer was taken away from her by the coronavirus pandemic.

“I was worried that maybe I might lose some of my talent or skills [not playing last spring],” Miller said. “I’ve really been trying to work on soccer and staying in shape outside of practice. We have a little soccer goal in my back yard and tied some jugs on it, so I work a lot on shooting and foot skills.”

Thankfully Miller was able to play all four seasons of volleyball and even served as the Indians libero her last two years. In that span, Miller helped lead Jackson to an overall record of 59-14-4 and win back-to-back conference and district championships while garnering all-conference and all-district honors.

Miller’s resume on the pitch is equally if not more impressive as she’s helped the Indians win back-to-back Class 4 District 1 Championships and reach the 2018 Class 4 Final Four for the first time in school history during her two seasons.

As a sophomore, the forward finished as Jackson’s third-leading scorer with 44 points as Miller came up with the third-most goals (17) while tying for second in assists with Natalie at 10. Natalie scored a team-high 24 goals as fellow 2019 graduate Mikala Liley paced her with 20 that season.

“It’s crazy it’s only been two seasons, and I’ve played four of volleyball — I don’t know how that works,” Miller joked. “My time here has been awesome, and I love soccer so much. I got to play two years with my sister, and I loved that whole group of seniors.”

Heading into 2019, Miller wasn’t sure if she and Natalie would become one of the top scoring duos in the area like they did because of how they fought at home sometimes. Any differences were put aside, though, as the Miller duo combined for 102 points with 41 goals and 20 assists.

“We actually worked so well together, and sometimes we were just clicking,” Miller explained. “Sometimes it wasn’t clicking, but for the most part it was and it was so amazing. We would always motivate each other to do better especially in practice. In the offseason, we’d stay in shape with each other. It was great to have someone like that push you.”