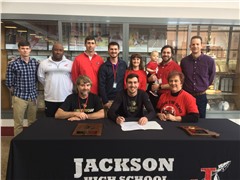 High school seniors all across the nation fulfilled their dreams when they signed their national letter of intent to play either football or soccer collegiately on Wednesday, Feb. 1, which was National Signing Day.

One of those seniors just happened to be Jackson’s own Josh Scholl, who signed to play soccer at Lindenwood University in Saint Charles, Missouri.

Scholl will be playing for Lindenwood as a forward, the same position at Jackson where he was named to the Class 4 2016 All-State team as well as the 2016 All-Midwest team.

Playing at the collegiate level is just one of Scholl’s goals for his soccer career, and it is one he is certainly excited to start — especially at Lindenwood.

“It’s a big accomplishment — [it’s been a dream] I’ve had since I was a little kid and ever since I watched my brother play,” Scholl said. “I just wanted to be the best I could and accomplish the goals I’ve set for myself. … The other goal I have for myself is to at least make it semi-pro or be a professional [soccer player].”

Signing his national letter of intent was a little “nerve-wracking” for Scholl since it meant he is now playing soccer under a contract that is paying for his tuition.

Besides playing college soccer at Lindenwood, he is also excited for the diverse playing styles the university holds with having players from on the team from countries like Chile, Germany, Iran, Serbia, Slovenia, Spain, Venezuela and Zimbabwe.

“It’s just going to be interesting overall to see how they play, and how I can learn from their style of play and how they can learn from my style of play coming from [Jackson] where I grew up playing soccer,” Scholl said. “I think it’s going to be an interesting and fun time for me to play with all of the foreign types of soccer that have been brought into Lindenwood.”

This season, Lindenwood’s men’s soccer team only lost four of its 19 total games with the last two losses coming in their final two games of the year.

Lindenwood is also only less than two hours away from Jackson, which Scholl says is important to him if he ever gets homesick and decides to come back on the weekends.

“[Lindenwood] has a great campus — it’s kind of historical,” Scholl said. “They are coming up with more buildings for dorms and other places for studying. It’s also just so close to home where if there’s a family illness I can come back anytime almost and be with family if that happens.”

With it being the offseason for Scholl, he is working on his fitness level so he can remain fit and also make an impact on his coaches in his freshman season.

“I know I’m probably not going to get to start — I hope to get some playing time, but it all depends on how I practice, and if I just put forth the effort of playing hard in practice that [the head coach] will see that I can play hard in a game,” Scholl said. “And hopefully that gets the consideration of me potentially even starting or getting more playing time rather than not getting playing time at all.”