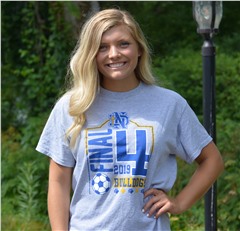 After earning an array of postseason honors in three sports as a senior and winning the Class 2 State Championship in soccer for the second time in her career, Cape Notre Dame’s Megan Heisserer can add the title of being the inaugural Cash-Book Journal Female Athlete of the Year to her resume.

On top of being named the CBJ’s first Female Athlete of the Year, Heisserer was named the top soccer player in Class 2 for the second time to become a four-time all-state honoree. She was also an all-conference and all-district selection in basketball, while also earning all-conference honors in volleyball.

“It is difficult [being a three-sport athlete], but I like it,” Heisserer said. “It really keeps me in shape, and it doesn’t burn me out on one sport specifically — it was just a good balance to have. It was challenging with that and school and work, but I liked staying busy. I wouldn’t change it.”

Heisserer’s athletic career started back when she was around 5 years old and first started playing soccer as a member of a team. She picked up basketball in the second grade, and she didn’t start playing volleyball until she was in sixth grade.

Growing up, Megan became passionate about basketball and soccer early on, but she said that soccer “always had a one up” on basketball. This is not solely based on how much she enjoyed playing soccer, but also because of the friendships and memories she’s made through the sport.

Heisserer knew she wanted to continue playing soccer after she graduated from high school, so she decided to join a traveling soccer team when she was only 10. The team was the Southeast Missouri Soccer Club, which is where Heisserer met future Notre Dame teammates like Bailey Beussink, Genevieve Kulla, Kristen Tarno, Abby Wilson, Julia Williams and Livia Wunderlich.

These future Bulldogs saw competition that ranged Georgia, Iowa, Memphis, Ohio and St. Louis: “I was so glad we had so many of us going to Notre Dame,” Heisserer said. “I do wish our whole team would’ve went to Notre Dame because that would’ve been awesome, but we had a pretty good amount go to Notre Dame from my travel team.”

Something else Heisserer experienced while playing for the SEMO Soccer Club was being coached by Southeast Missouri State coaches Heather and Paul Nelson.

“I played for Heather and Paul when I was younger and they are great coaches,” Heisserer said. She signed with SEMO following this basketball season to continue her soccer career. “There’s other great players from around here that are going there, and I’m really excited to play with them.”

In the Bulldogs span of reaching the Class 2 state title game three years in a row, they have only lost six games and tied twice while coming up with a combined 72 wins.

Notre Dame’s girls soccer program had yet to win a state championship until Heisserer and the rest of the 2019 class were sophomores. This is when the Bulldogs finished 23-1 overall and defeated Springfield Catholic 3-2 in overtime to win state.

Heisserer and her classmates reached the state championship yet again as juniors, but the team was without its key defender Wilson, who suffered a season-ending injury in the semifinals. The Bulldogs fell to Christian 1-0 in the 2018 state title game.

“Abby is our anchor on our field, and when she’s not back there it’s kind of scary because we’re always like, ‘Oh, Abby is back there. We’ll be OK,’” Heisserer said. “Not having her back there was a little scary, but she made a quick recovery and I’m glad she’s back.”

After falling in the state title game, the only thing on Heisserer and the rest of her teammate’s minds were to return to the state championship match and win it. That’s exactly what they did.

The Bulldogs won a program record 26 games with only one loss and one tie this season to claim their second state title in three years. Notre Dame defeated Visitation Academy handedly 4-0 in the championship to do so as Megan scored two goals in the first 33 minutes of her final high school match.

Before the state title game, the Bulldogs defeated Pleasant Hill 3-2 in the semifinals, but Heisserer failed to score a goal in that game.

“That was very frustrating, but you’re going to have those games — everyone has those games,” Heisserer said. “You can’t get frustrated with yourself, and you have to keep playing and trust that your teammates are going to come through. Mine were able to, and I think that’s what makes people better. You have to work through that.”

In the fall, Heisserer served as the volleyball team’s libero where Notre Dame was able to defeat Jackson for the SEMO Conference Tournament Championship after losing to the Indians in the same game in 2017.

The Bulldogs girls basketball team wasn’t able to capture a conference title like the volleyball and soccer teams Heisserer was on did, but they ended Dexter’s eight-year reign as the Class 4 District 1 Champions. She also reached 1,000 career points this season.

Heisserer averaged a team-high 13.3 points along with 3.5 steals and 2.3 assists per game and was second in 3-pointers made behind fellow guard Williams at 44.

“Being able to get that district championship and put the [basketball] program in the right direction was huge,” Heisserer said. “Then being able to go out in soccer [as state champions again] topped it all off.”