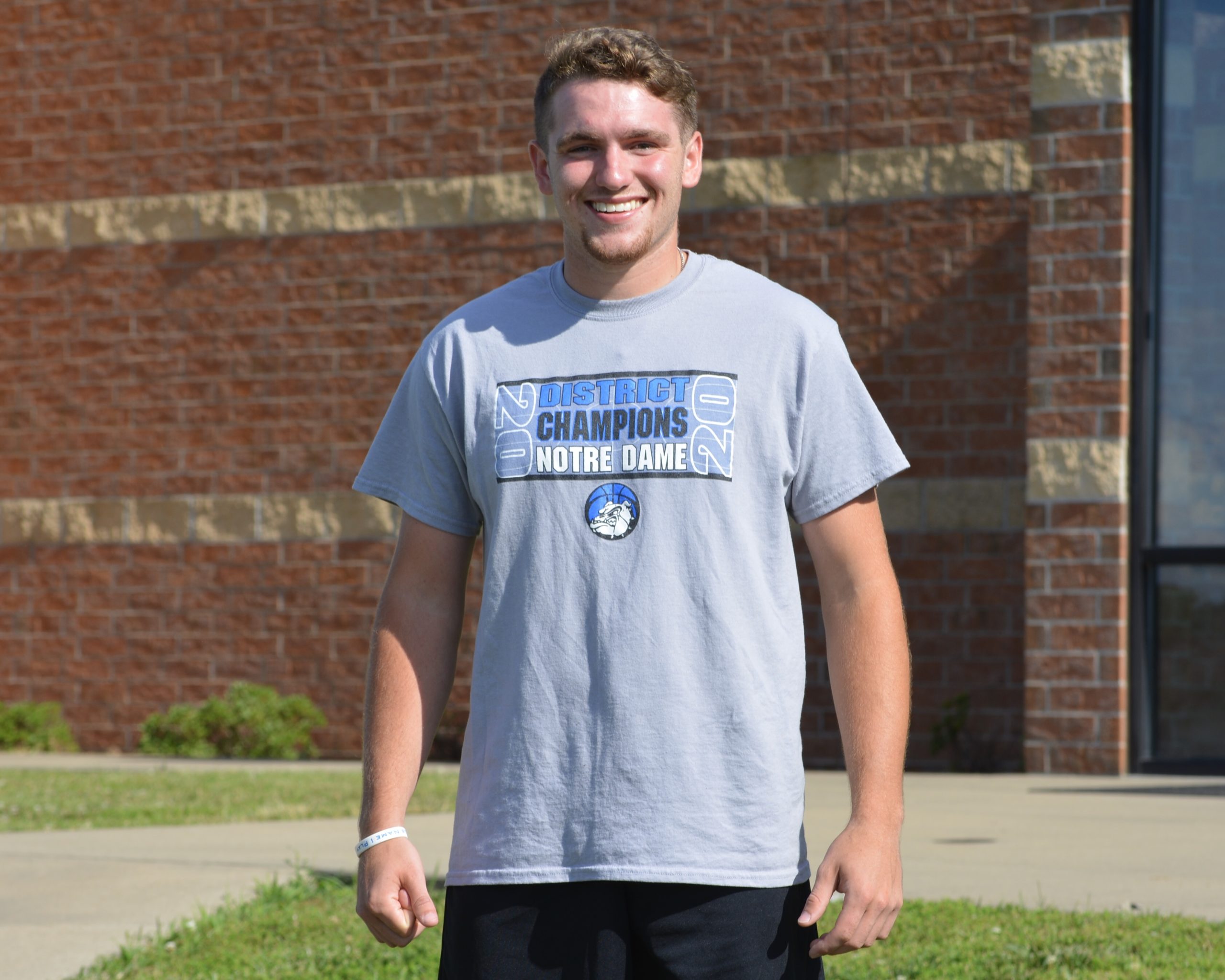 Notre Dame 2020 graduate Tyler Landewee predominately played basketball and baseball his entire life, but he decided he would also play soccer this fall before his time as a Bulldog was over.

Landewee helped all three programs win a championship in his final full season with each team as the first was in baseball since his 2020 campaign was canceled due to the coronavirus pandemic.

As for his high school athletic career now being over, Landewee said, “It’s kind of scary. Four years of being here, you kind of build a family around yourself and everybody else. Coach [Paul] Unterreiner has done everything for me and it feels like I’m leaving him. It just kind of scares me.”

In the 2019 spring baseball season, Landewee helped Notre Dame win both the SEMO Conference regular season and tournament titles. The Bulldogs came up short of winning the Class 4 District 1 Championship by falling to Sikeston 4-0.

Landewee garnered all-conference and all-district honors as Notre Dame’s shortstop by finishing as the team’s leader in batting average (.407), hits (33), stolen bases (nine) and tied for first in runs scored (23). He was also fifth in runs batted in at 15 and held the highest on base percentage among starters at .484.

Defensively, Landewee only committed three errors for a fielding percentage of 96.4% through 25 games. He won two games on the mound with four saves while only allowing one run, nine hits and struck out 14 batters for an earned run average of .538.

Along with Landewee, Notre Dame returned a senior class with promise that included fellow all-conference and all-district selections Kameron Dohogne and Brayden Eftink. Both will be playing college baseball as Dohogne signed with Columbia College, while Eftink inked with Jefferson Community College.

Landewee said the thing he will miss the most about baseball at Notre Dame is the practices. “At practices we got our work done, but we also knew how to have fun with it. We would be in the cages, and we’d goof off, but we also know when it’s time for business.”

Like Dohogne and Eftink, Landewee will be competing at the next level but on the basketball court. He signed with Southwestern Illinois College following a Class 4 All-State campaign with Notre Dame this winter.

Not only did Landewee become the first Bulldog to garner all-state for the first time since Quinn Poythress did so in 2015, but he also helped Notre Dame break a five-year drought of not reaching the coveted Final Four.

“[Making the Final Four] was huge,” Landewee said. “My teammates — the people in my class — always talked about our senior year we’re going to prove something. The juniors and underclassmen that played with us took that role, knew what we wanted to do and bought into it really well. We proved our point.”

One of the turning points for Notre Dame this season was avenging a 23-point loss, 64-41, to Charleston in the Christmas Tournament title game on Dec. 30. Four days later, the Bulldogs hosted the Bluejays and came away with a 22-point win at 73-51.

“I think that just set a chip on our shoulder,” Landewee said. “We knew we were better than that, and I think in the Christmas Tournament we came out scared and felt like we didn’t belong there because we were never there before. We realized after that, we belong here and belong anywhere with the best.”

Another one of Landewee and his teammate’s goals this season was to avenge a double-overtime loss to Cape Central they suffered in the 2019 district semifinals. The Tigers defeated the Bulldogs 45-44 after tying the game with 0.4 seconds left in the first overtime.

Notre Dame more than avenged the season-ending loss by defeating Central all three times the two teams faced each other this past winter. The first win was in the Christmas Tournament semifinals at 70-54 and next in the regular season at 52-44 en route to the Bulldogs winning the regular-season conference title.

The third and final victory came in the district championship game Notre Dame hosted, which also went into double overtime but this time in favor of the Bulldogs, 38-37. Landewee seemingly made a buzzer-beating layup at the end of regulation, but a referee said time had expired before he was able to get the shot off.

With 7.8 seconds left in double overtime, Landewee made the game-winning shot on a 1-and-1 free-throw attempt after missing his lone try from the line earlier in the final four minutes.

“That was kind of our goal this season,” Landewee admitted. “After last year happened losing in overtime, we were like, ‘We’re not letting this happen again. We’re going to play this game like it’s truly our last.’ We did and gave it to them. … It was stressful knowing that anybody who scores that could be it. There might not be another bucket of the game.”

Notre Dame handed Park Hills Central a dominating defeat at 59-36 in the sectional round as Landewee led all scorers with 18 points. The Bulldogs were then able to beat Westminster Christian Academy 59-53 to advance to the Final Four.

Landewee scored a team-high 16 points against West-minster, while fellow senior Justice Thoma and junior Caleb LeGrand paced him with 11 points a piece.

Landewee and the Bulldogs were unable to play at state, however, because of MSHSAA being forced to cancel the Class 4 and 5 Final Fours due to the pandemic. Coach Unterreiner gave his team the news in what Landewee called a powerful experience.

“Seeing him walk in there, and seeing the tears in his eyes, we all knew [the Final Four was canceled],” Landewee recalled. “After he told us and everybody kind of left the chapel, the seven seniors on the team couldn’t move. It was breathtaking and we all sat there hugging each other.”

To be the first player for Notre Dame named Class 4 All-State in five years, Landewee averaged a team-high 13.5 points, 3.9 assists and 2.4 steals per game. He also finished fourth on the team in rebounds by coming down with 4.4 per contest.

At SWIC, Landewee will be joining a familiar face from the SEMO Conference in Charleston 2020 graduate and fellow guard Samuel Bledsoe, who was named Class 3 All-State and helped the Bluejays finish as the state runner-ups. Bledsoe is the all-time 3-pointers made leader in school history and averaged 2.6 triples per game this season.

In the fall during his first season with Notre Dame soccer as an outside midfielder, Landewee helped the squad win a second-straight Class 2 District 1 Championship with a 16-6-1 record. Landewee was talked into playing by friends of his who were already on the team that told him, “You’re athletic enough. You can play.”

When asked what advice he would give to younger aspiring athletes who will be Bulldogs themselves one day, Landewee replied, “Size does not matter. You can always work hard and overcome your size. Hard work beats talent any day.”