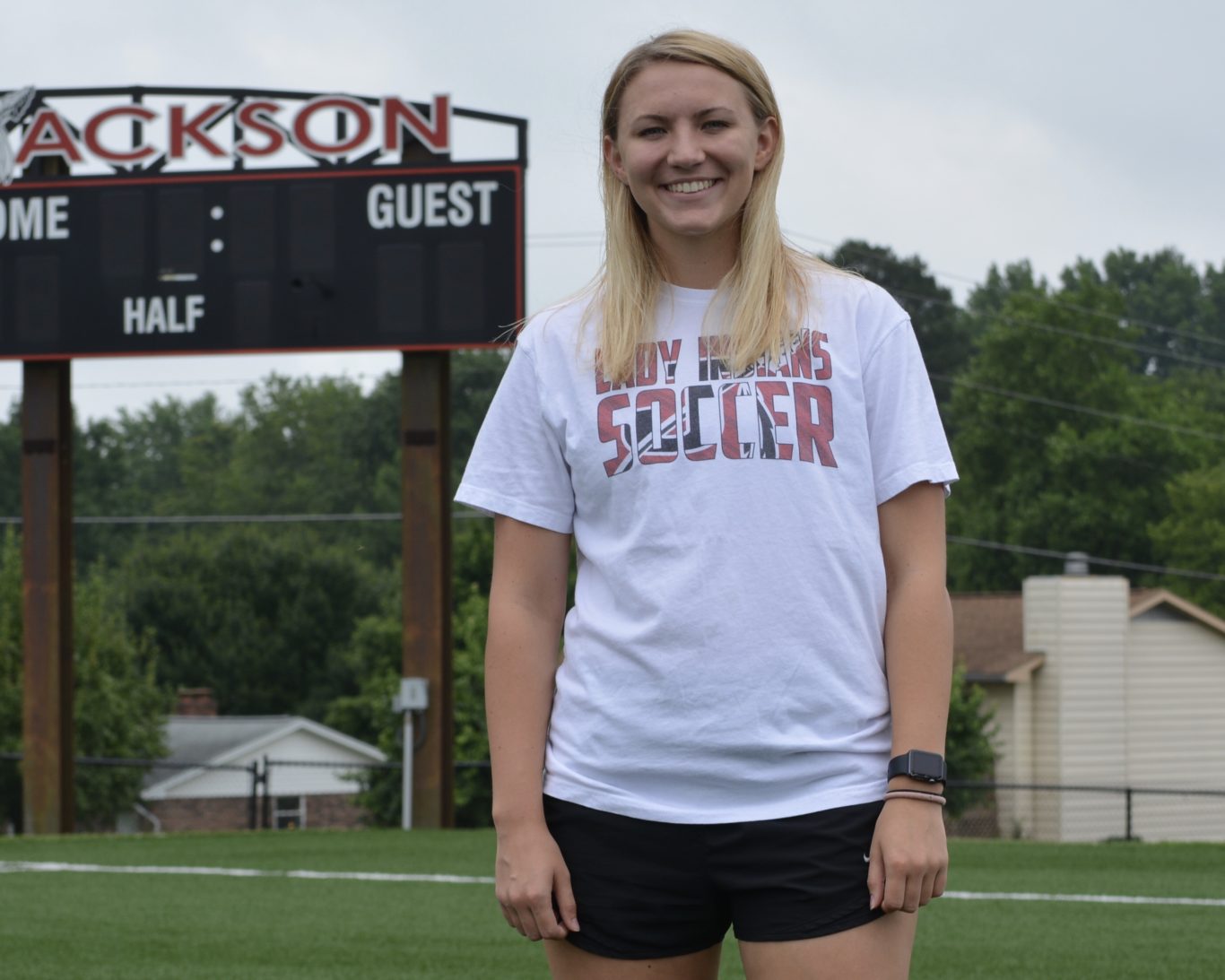 This past school year was the last time Jackson 2020 graduate Piper Guilliams will play any sport since she’ll be attending Mississippi State to pursue a degree in biomedical engineering. However, it’s safe to say Guilliams left her mark as an Indian athletically, especially in her final three seasons.

Guilliams was a three-sport athlete for Jackson as she played volleyball in the fall, basketball in the winter and lastly soccer in the spring, which she did not have a full season of this year due to the coronavirus pandemic.

When asked how she felt now that her athletic career is over, Guilliams said, “It’s a good feeling but also sad because this has been my whole life. Graduating and everything was a lot of fun — I’m glad we got to have that ceremony. I’m also glad we got to have our last little [soccer] tournament here, which was a lot of fun. It’s a sad ending, but it’s a good ending because I’m ready for the future.”

Instead of a full spring soccer season, Guilliams and the rest of the Indians were able to host the SEMO Friendlies Tournament, where Jackson finished 2-0 with wins over Notre Dame and Poplar Bluff. Guilliams scored the final goal of the match in her team’s 8-0 win over Poplar Bluff off a free kick.

“[Playing in the SEMO Friendlies Tournament] was a good feeling — I’m glad we had it at home,” Guilliams said. “We packed the stands, which is a good thing to see our last time because that’s something we were always able to do. We also got to have our senior night, so it was just a good ending.”

In Guilliams’ last full season with Jackson soccer, she helped the Indians win a third-straight Class 4 District 1 Championship as the team finished with an overall record of 17-3 in 2019. She finished with two assists in a year where the Indians finished the regular season undefeated on their home turf.

Other players on that team included the likes of 2019 graduates Laura Bertrand, Emily Hermann, Mikala Liley, Natalie Miller, Taylor Nelson and fellow 2020 graduate Cammie Pieper, who will play soccer in college at Culver-Stockton.

“We had a lot of great players in the [2019 class], and they really knew how to bring it,” Guilliams said. “It was good playing with them and having that season. You knew every time you go out on that field, they’re out there playing to win.”

Winning is exactly what Jackson’s volleyball team did this fall during Guilliams’ final season on the court as the Indians recorded their most wins of last decade at 28-9-3 overall. Jackson took home the SEMO Conference regular season and tournament championships and also won the Class 4 District 1 title for the first time since 2015.

Guilliams proved to be one of Jackson’s top servers as she led the team in most service points (190), aces (59) and finished with a serve percentage of 94% on a total of 379 serves. Guilliams was third on the team in digs at 191 behind all-conference and all-district juniors Katelyn Miller (411) and Madelyn Bourner (198).

To win both the conference and district tournament, the Indians went on an impressive, nine-match winning streak as they only dropped two sets in the span. The streak included two wins over Notre Dame and a 2-1 victory over Farmington in the district title match, which is the same contest the Indians had fallen to the Knights in the last two years.

“That was one of the best feelings because it was something we have never done before — win all three of those titles,” Guilliams said. “It was good to go out like that because we were all so close. You couldn’t ask for anything better than to end a season like that except for going to state of course.”

After winning a district title, Jackson’s volleyball season came to an end in the sectional round to Cor Jesu in a 2-0 loss to a team that fell to eventual Class 4 runner-ups Lafayette Wildwood 2-0 in the quarterfinals.

Guilliams was one of the two seniors on this year’s team as the other was fellow 2020 graduate Mackenzie Stoner, who garnered first team all-conference and all-district honors. Stoner will continue her volleyball career at Evangel University.

Guilliams said volleyball is one of her favorite sports because of how calming it is to play, personally. She also enjoys the excitement of recording a kill or an ace and digging for the ball, which is something she said Mirly taught her and the rest of the Indians to do well.

“We were all willing to dive, but we just didn’t know how to do it that well,” Guilliams said. “We learned how to do it a lot better and more efficient, so whenever you do it better you don’t get hurt as much. That was a good thing to learn because you have a lot less bruises.”

The final sport Guilliams was able to play a full season of at Jackson her senior year was basketball, where she secured a spot in the Indians starting five. In 27 games, Guilliams averaged 7.2 points, 3.4 rebounds, 1.7 assists and finished third in 3-pointers made with 20 behind juniors Madison Lambert (60) and Olivia Ward (24).

Guilliams was named to the Class 5 District 1 All-District Team along with Lambert and Ward, while garnering Class 5 Academic All-State honors. Guilliams was also named academic all-state in volleyball.

Guilliams said one of the main reasons why she was able to have success on the basketball court this season was because of her confidence. As a junior, Guilliams served as a contributor coming off the bench and filling in for the likes of 2019 graduates Kalli Mayfield and Liley.

“When you’re a senior, you’re like, “OK, this is my last year. I have to give it all that I’ve got,’” Guilliams said. “That was probably my biggest thing was getting that confidence to do everything I knew I was always capable of.”

Jackson only finished one game above .500 at 14-13 overall, but the Indians were still able to reach the district championship game for the 10th season in a row.

Jackson was unable to win a fourth-straight district title as it fell to rival Poplar Bluff 49-44, but Guilliams was able to score a game-high 17 points in her final outing on the court. Poplar Bluff’s all-time leading scorer (2,301 career points) and Saint Louis University signee Kiley Bess scored five less points than Guilliams in the contest at 12.

“This is probably one of the closest teams I’ve been on — we’re such close friends,” Guilliams said. “We would go to church together and hang out all the time. Being so close and getting to play together is such a fulfilling experience because playing with close friends is so different than playing with people who you just see at school.”

While playing three sports at Jackson on the varsity level, Guilliams played in front of countless young girls who will one day be wearing an Indians jersey like she did.