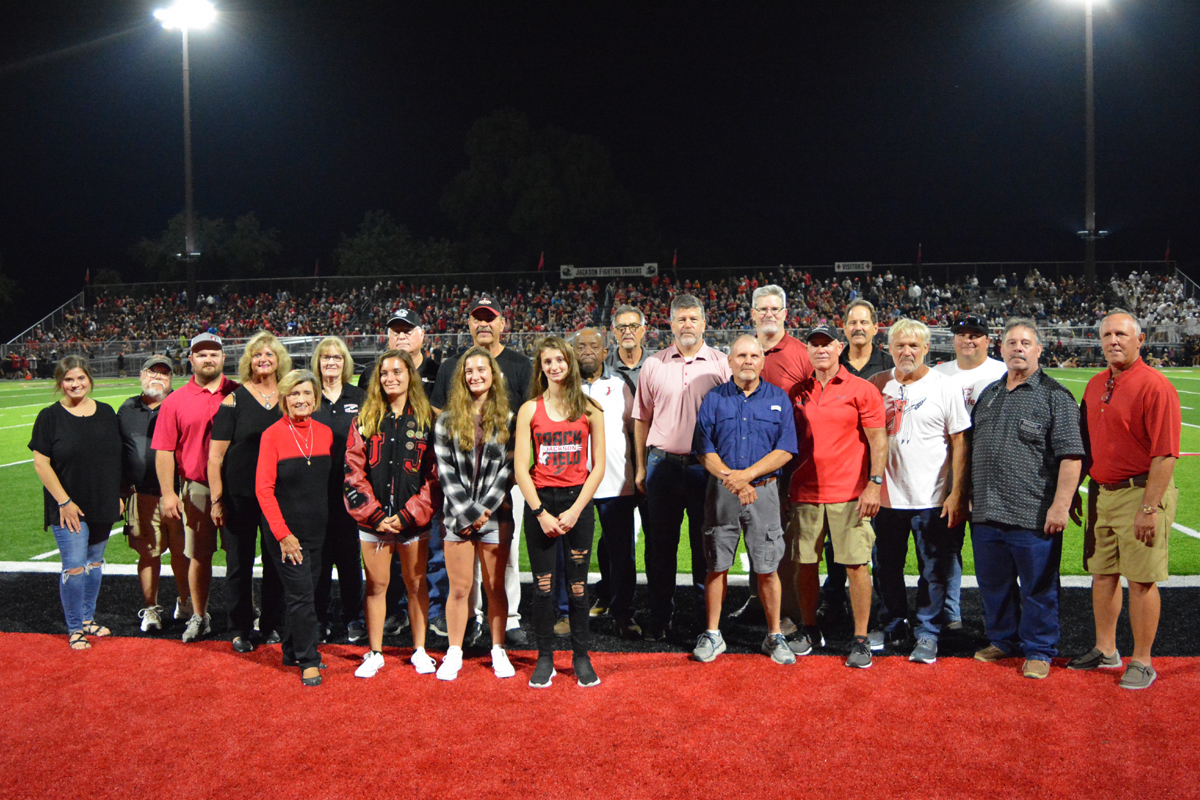 The first inductees to the Jackson High School Athletic Hall of Fame were honored during halftime of the Sept. 17 home football game against Cape Central. Photo by Jay Forness

For the first-time ever on Sept. 17, Jackson High School honored former student athletes by inducting six individuals and three teams into the school’s inaugural athletic hall of fame class.

This was during halftime of the annual football rivalry matchup between Jackson and Cape Central, which was held at The Pit this year. Thousands of Jackson faithful fans were in the stands for this historic celebration.

“It was just a unique and very emotional night,” Jackson activities director and assistant athletic director Matt Roethemeyer said. “It was the 115th showing of Jackson and Cape — our biggest and longest rivalry. What a better way to honor those special people than to do it that night.”

The Jackson football team’s public announcer Dan Stover officially introduced each 2021 Hall of Fame inductee. He did so by reading of their accomplishments as Indians, as well as if they had any achievements at the collegiate level.

This year’s inductees were selected by a 15-person committee, which will always include the current Jackson principal, athletic or assistant athletic director, at least one member appointed by the Tribal Council Booster Club, current and former Jackson coaches and alumni.

People ranging from former athletes, coaches and individuals who have given praiseworthy service to any Jackson athletic program can be inducted. Athletes aren’t eligible until five years after they’ve graduated from Jackson. Teams that have won a state championship are automatically nominated, while teams placing in the top four at state are eligible. 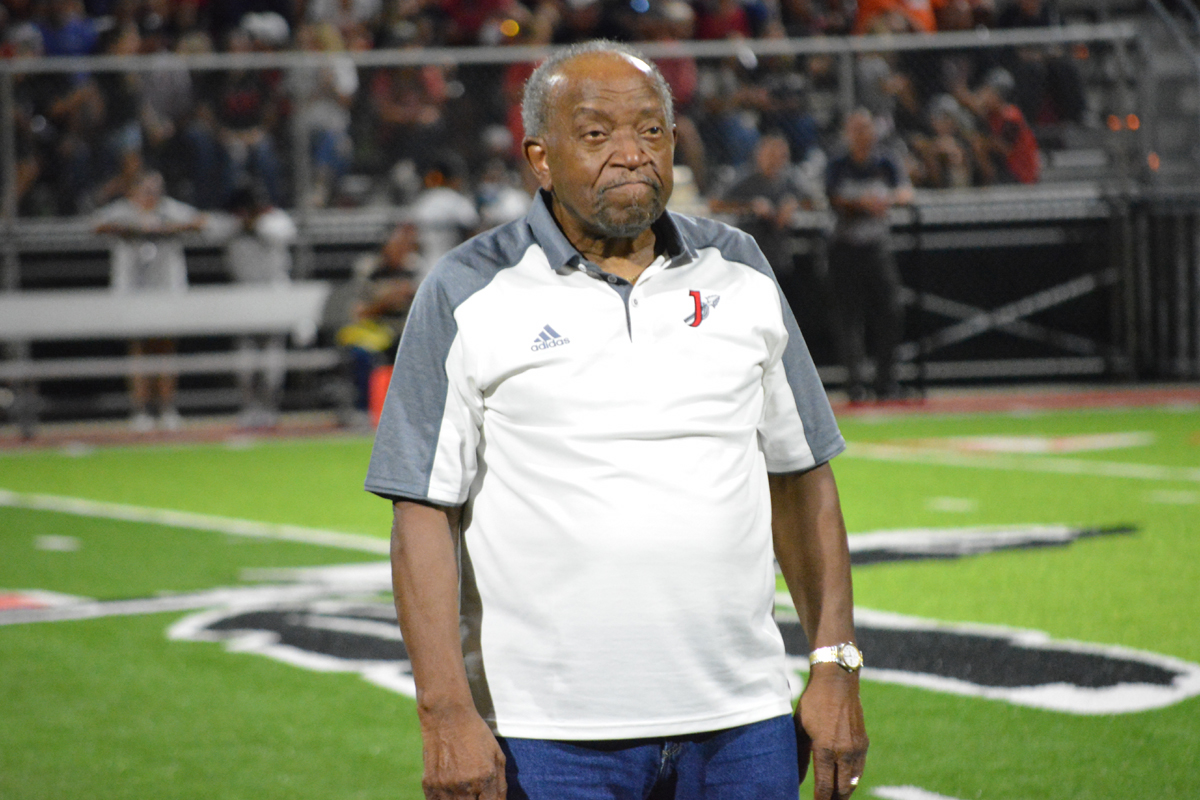 Bob Mitchell was officially inducted into the Jackson Athletic Hall of Fame at halftime of the Indians rivalry game against Cape Central on Sept. 17 at The Pit.

Bob Mitchell was the first inductee presented by Stover as he was a three-sport athlete during his time at Jackson by lettering in football, basketball and track and field.

Bob served as a team captain for basketball and football his senior year, which was when he became the first Indians football player to ever be named all-state. Mitchell was also a three-time all-conference selection in football (1957-59) and was all-conference in basketball and track as a senior. After graduating from Jackson, Mitchell played football at Lincoln College. 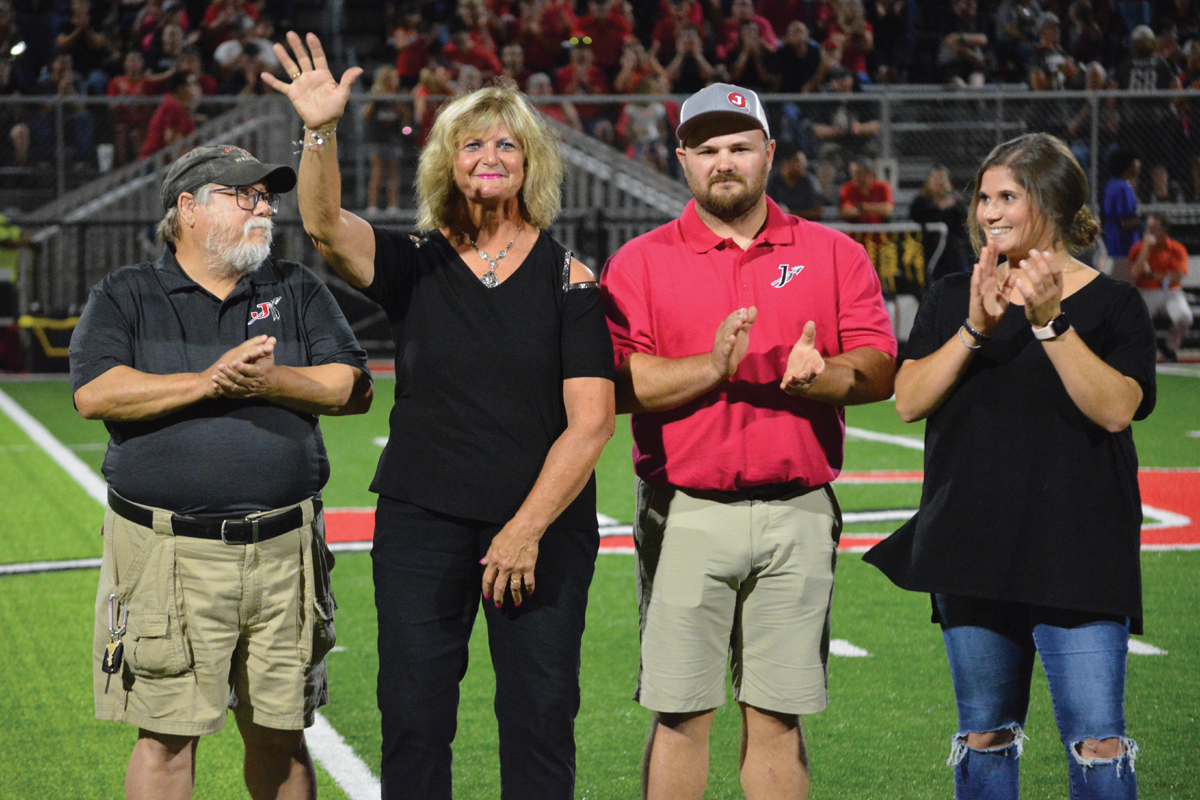 Becky (Bollinger) Riney was officially inducted into the Jackson Athletic Hall of Fame at halftime of the Indians rivalry game against Cape Central on Sept. 17 at The Pit.

Next up was the only female inductee into Jackson’s first hall of fame class Becky Riney, who was a two-sport athlete for Jackson as she was a member of the basketball and track and field teams.

Becky was a standout thrower on Jackson’s track and field team by becoming the first Indian to earn all-state in the sport. She did so by breaking the Missouri state softball throw record with a 202-foot, 9-inch heave as a senior in 1977. Riney was also a district champion in the event.

Additionally, Riney was a member and team captain of the very first girls basketball team at Jackson her junior year. To end her basketball career, she was named all-district and led the Indians to win a regional championship in the program’s second year of existence.

Riney went on to play softball at Southeast Missouri State on a full scholarship from 1978 to 1982, where she lettered all four years and earned SEMO MIAA Division II First Team All-Region honors her final two seasons. 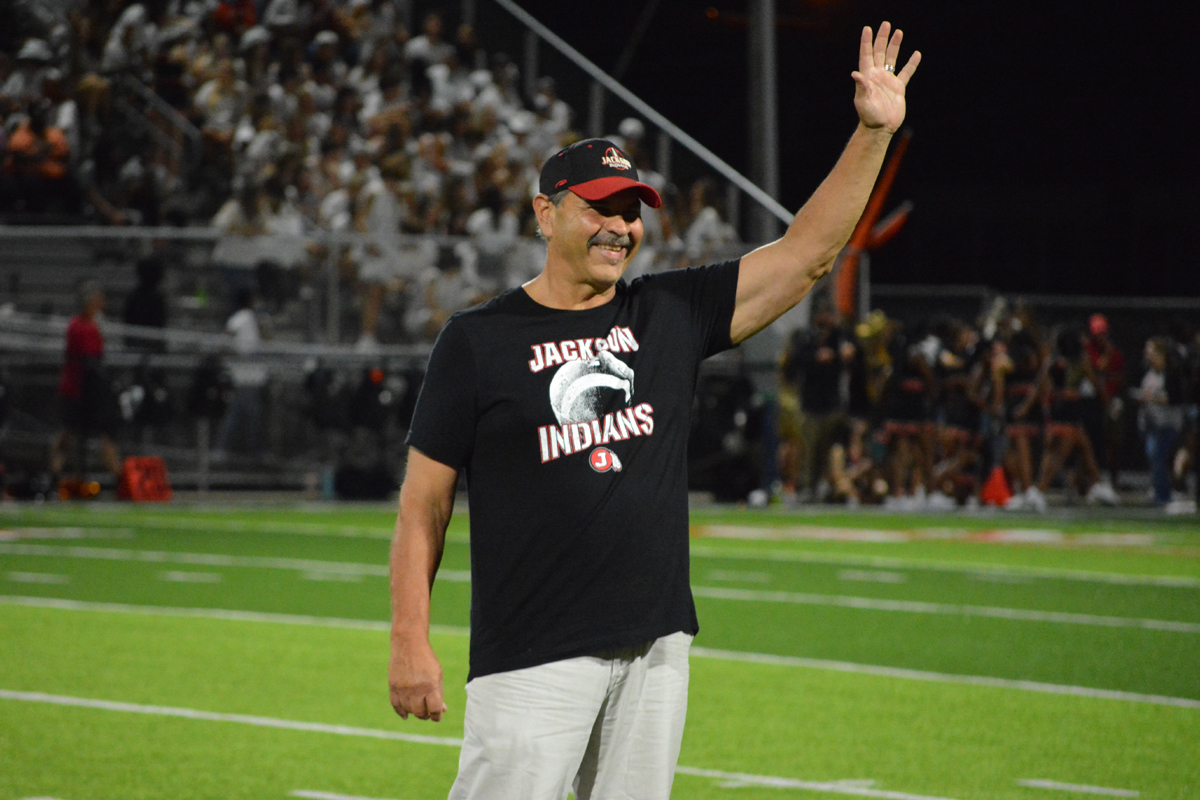 Mike Gohn was officially inducted into the Jackson Athletic Hall of Fame at halftime of the Indians rivalry game against Cape Central on Sept. 17 at The Pit.

The next inductee of Jackson’s first athletic hall of fame class was Mike Gohn, who was a three-sport athlete as an Indian (football, basketball and track and field).

During his senior year in 1977, Gohn was named all-conference and all-district in all three sports, while garnering all-state in football and track. He was also a member of the East-West Senior All-Star Football Team. Gohn still holds Jackson track’s shot put record in track with a heave of 57 feet, five inches, which made for a second-place finish at the state meet.

Moving on to college, Gohn received a scholarship to continue his football and track career at SEMO. On the gridiron as a Redhawk, he was a two-time all-conference and All-American selection in 1979 and 1980. In 2007, Gohn was officially inducted into SEMO’s Athletic Hall of Fame.

Gohn entered education after graduating from SEMO and was selected as the St. Louis Area Athletic Director of the Year back in 2001. He was also the first athletic director to ever serve on the MSHSAA Board of Directors from 2001 to 2009. Between that span, Gohn was named the 2008 State of Missouri Athletic Director of the Year. He also received the MSHSAA Distinguished Services Award in 2011 and the Jim Otis Award from the National Football Foundation in 2014. 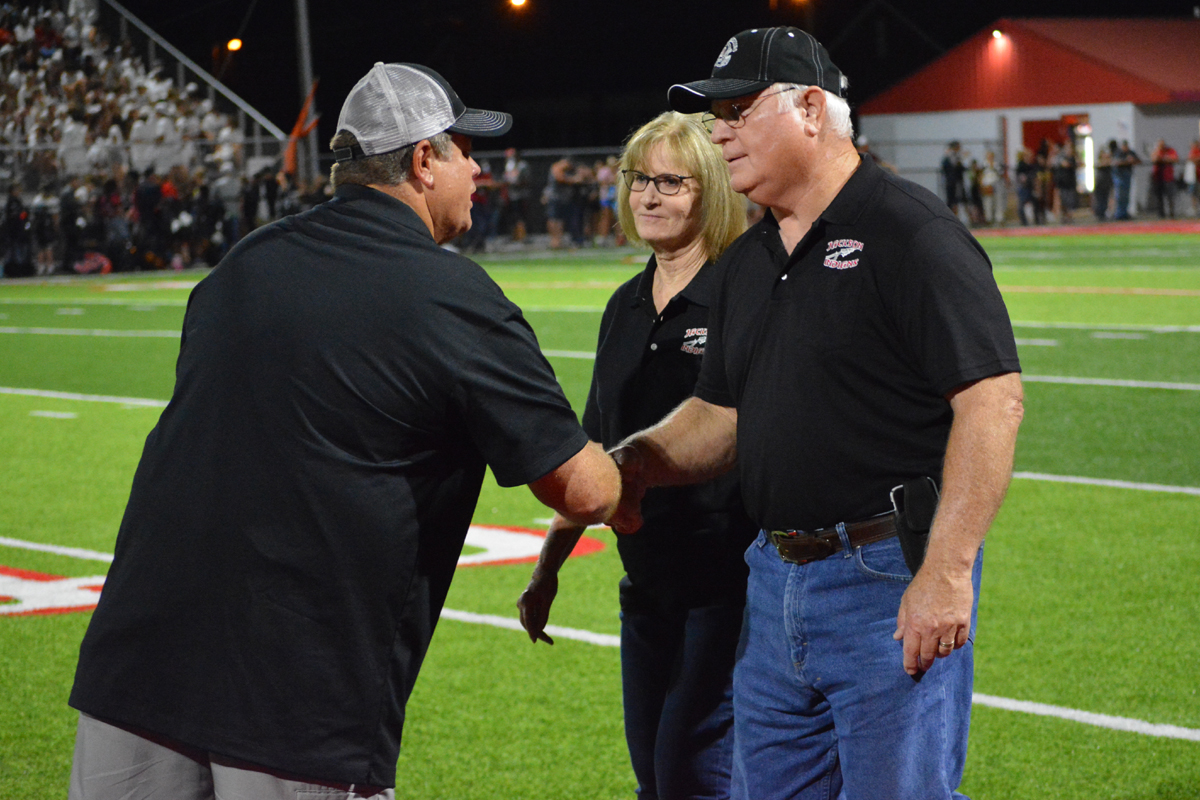 Richard Seyer was officially inducted into the Jackson Athletic Hall of Fame at halftime of the Indians rivalry game against Cape Central on Sept. 17 at The Pit.

Jackson’s next induction was Richard Seyer, who was also a three-sport athlete like Gohn but was a wrestler instead of a basketball player during the winter time.

During his senior year, Seyer became the second Indian to ever earn all-state on the football team after Mitchell. He was also the captain of the football team and earned all-district as a defensive lineman. Seyer followed that up by placing third at the state wrestling tournament. After graduating from Jackson, he earned a scholarship to continue his football career at Coffeyville Community College.

Webber is described as the individual who helped build Jackson’s football program into a perennial powerhouse. From 1969 to 1988, Webber recorded 130 wins with 72 losses and two ties as the Indians head coach. Webber also coached the track team from 1969-1970.

Another mark Webber left was in Jackson’s wrestling program as he served as the program’s head coach from 1969-1981. During that span, Jackson wrestling won its first-ever state championship in 1977 while also winning seven conference titles and six district titles along the way. Individually, Webber coached two state champions, 10 state finalists, 21 all-state wrestlers and 38 conference champions. The Indians had a dual-meet record of 132-17 under Webber.

Webber was rightfully inducted into both the Missouri Football and Wrestling Coaches Association Hall of Fame in 2009 and 2008, respectively.

Nelson left his mark on Jackson athletics by being instrumental in starting sports for female athletes. He introduced the Indians first-ever girls track team in 1974 and introduced Jackson’s first girls basketball team the year after. Before starting those two programs, he taught in various roles at Jackson from 1951-1963 and became vice principal in 1963-64. The next school year Nelson became principal, and he served in the position from 1965 to 1986.

Because of his forward thinking, women’s sports at Jackson have not only grown but expanded. He would especially be proud of his great granddaughters Mallorie, Gracie and Mollie Metzger, who are members of the girls cross country and track and field teams, while they were also on the first-ever Jackson girls wrestling team. 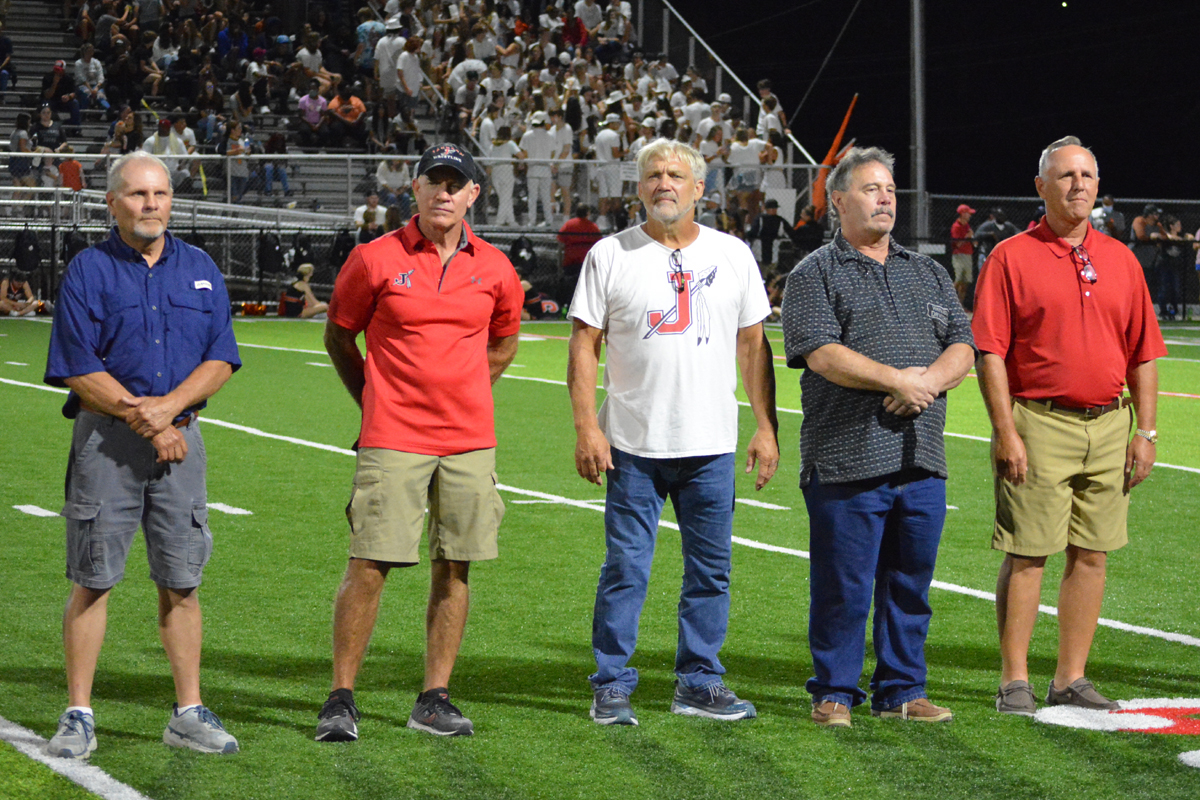 The 1977 wrestling team was officially inducted into the Jackson Athletic Hall of Fame at halftime of the Indians rivalry game against Cape Central on Sept. 17 at The Pit. Members of the team pictured from left to right: Kevin Bolen, Steve Wachter, Kevin Rampley, Rich Weith and Jimmy Williams.

“I was touched by the people who were inducted. We had a lot of ‘firsts,’ and I thought that was very fitting for our first hall of fame inductions,” Roethemeyer said. “[This class] hits a lot of things that were first within our school. It was just unique with a lot of individuals who were exemplary people that I’ve grown up looking up to. I’ve developed my own personal beliefs off of a lot of those people.”