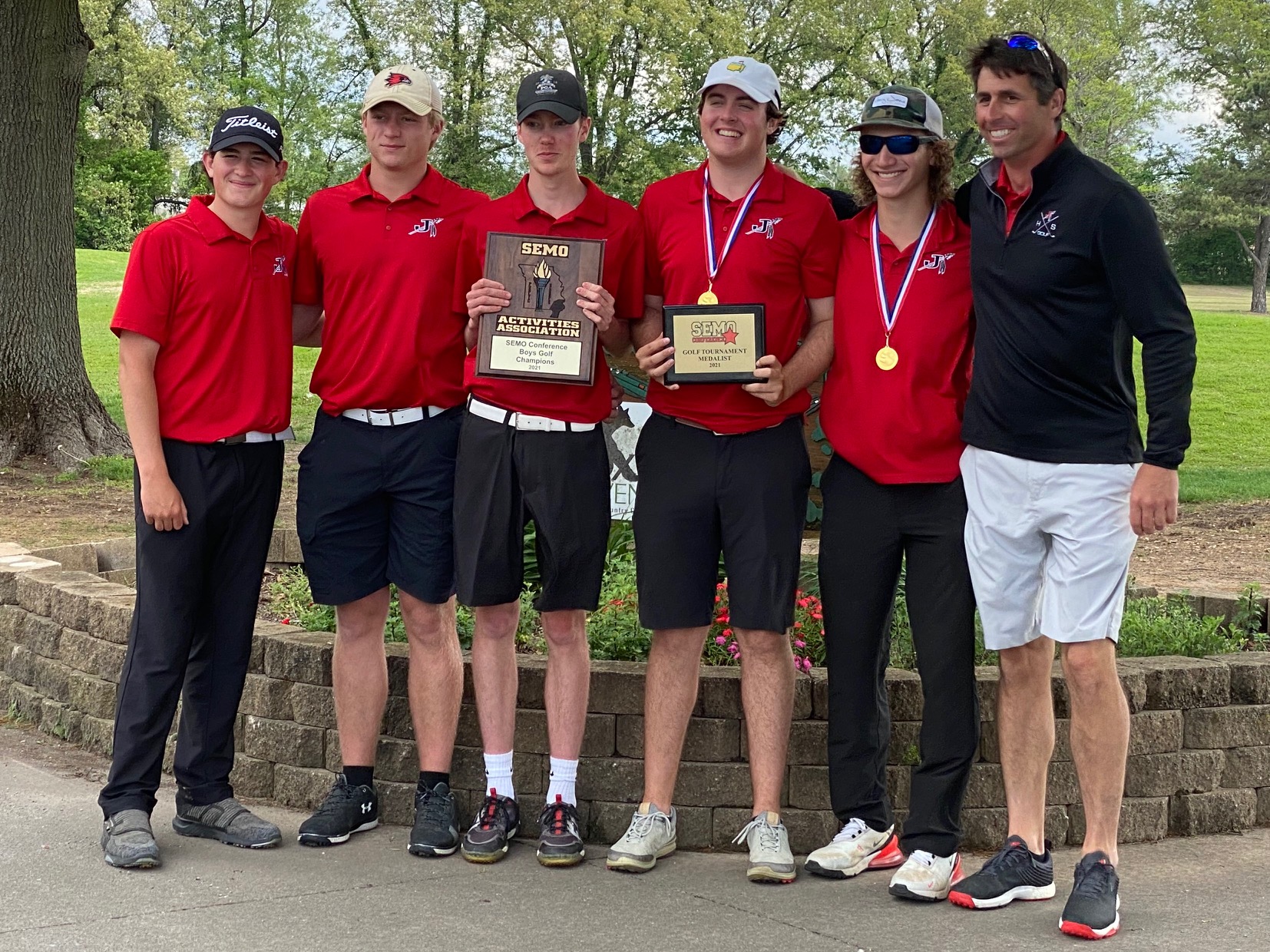 For the third-straight time, the Jackson boys golf team proved to be the best squad in the SEMO Conference by winning the annual conference tournament last week.

The Indians did so by two strokes at 305 over Poplar Bluff’s 307 as Jackson senior Carsen Silliman won his first-ever individual SEMO Conference Championship by hitting nine under par at 62. Fellow Indian junior Evan Adams also finished in the top 10 with a 79, while seniors Justin Berjer, Nate Schlitt and Bryce Norman finished with scores of 81, 83 and 84, respectively.

Conference and Class 5 District 1 foe Poplar Bluff had two golfers finish in the top 10 as well with junior Woodrow Innes placing as the runner-up at 70. Fellow Mules junior Alex Wiseman tied for third with a 74.

“Poplar Bluff is a really good team — a really good program down there, and I think their program is getting inducted into the hall of fame,” Jackson head coach Zack Walton said. “Anytime you can beat Bluff, it lets you know you’re doing something right.

“I thought our boys did a really good job of hanging in there. Not playing their best, they hung in there and grinded through it. Of course Carsen played lights out for us. … It was an amazing feat that he did.”

Not only did Silliman’s score secure his team the overall and himself the individual conference title, but it also happened to be the best score by any golfer in MSHSAA history. The previous record was held by Kevin Kring of Springfield Central, who recorded a 63 in 2006.

On top of setting the state record, no other golfer in the MSHSAA record book for best individual score in a match finished nine strokes under par like Carsen did.

“Carsen came out and birdied the first six holes,” Coach Walton said. “Sometimes in golf things have to go your way, and they did. He’s a really good golfer, and if you get a couple little things to go your way, next thing you know you can shoot a good number. He ended up making 10 birdies that day and one bogey.”

Silliman is the only returning varsity member from Jackson’s 2019 Class 4 State Championship team, where he helped the program win its first-ever state title and became a two-time all-state selection while playing with a broken foot.

Carsen, who has already signed to play golf at Southern Illinois, joined fellow state champion and 2019 graduate Case Englehart in MSHSAA’s record book. Englehart is tied for third all-time on a par 71 course with a score of 65 he recorded his senior year, and he now plays for Arkansas-Fort Smith.

Coach Walton described Silliman as the leader of the team due to his demeanor because Carsen “doesn’t really get uptight about anything.” Walton went on to describe Silliman as easy going and confident in whatever he does, which the other golfers feed off of.

“Our kids always strive to play with him or try to beat him, which is good for our practices every day,” Coach Walton said. “[At conference], Adams played pretty well that day, and he was pretty happy with shooting a 79. That’s a good score for him. The other guys weren’t bad — they just had to grind it out.

“They just weren’t playing their best, but they hung in there. When you get in trouble, we just try to punch it out and get a bogey and move on. We try to eliminate those doubles and triples, and that’s what’ll keep your number at least low enough that you can compete and come out with a win.”

With not having an entire season last spring due to the coronavirus pandemic forcing MSHSAA to shut down the season, Walton said winning conference is a testament to how much time his golfers play on their own time.

“You don’t win tournaments or you don’t win matches here and there if your boys aren’t playing in the offseason,” Coach Walton expressed. “That goes to show the dedication that Jackson boys have in golf. I’ve been blessed this year to be around some really good athletes who are dedicated to their sport.”

For the postseason this year, MSHSAA has made the decision to make it to where only the top 18 golfers in each district move on to state even if a team wins its district. There are 15 teams in Class 5 District 1 along with Jackson and Poplar Bluff, which include Chaminade, Christian Brothers College, Eureka, Fox, Kirkwood, Lindbergh, MICDS, Northwest, Oakville, Parkway South, Priory, Seckman and SLUH.

Silliman was the only Jackson golfer able to advance to the Class 5 State Tournament as he finished in a four-way tie for third place with a score of 73. Two golfers ended up tying for first place in CBC’s Ian Blome and MICDS’ Henry Mikula at 72.

Overall, Jackson took eighth as a team with 318 points as Chaminade won the district title with a team score of 302. Chaminade finished with having four golfers place in the top 15.