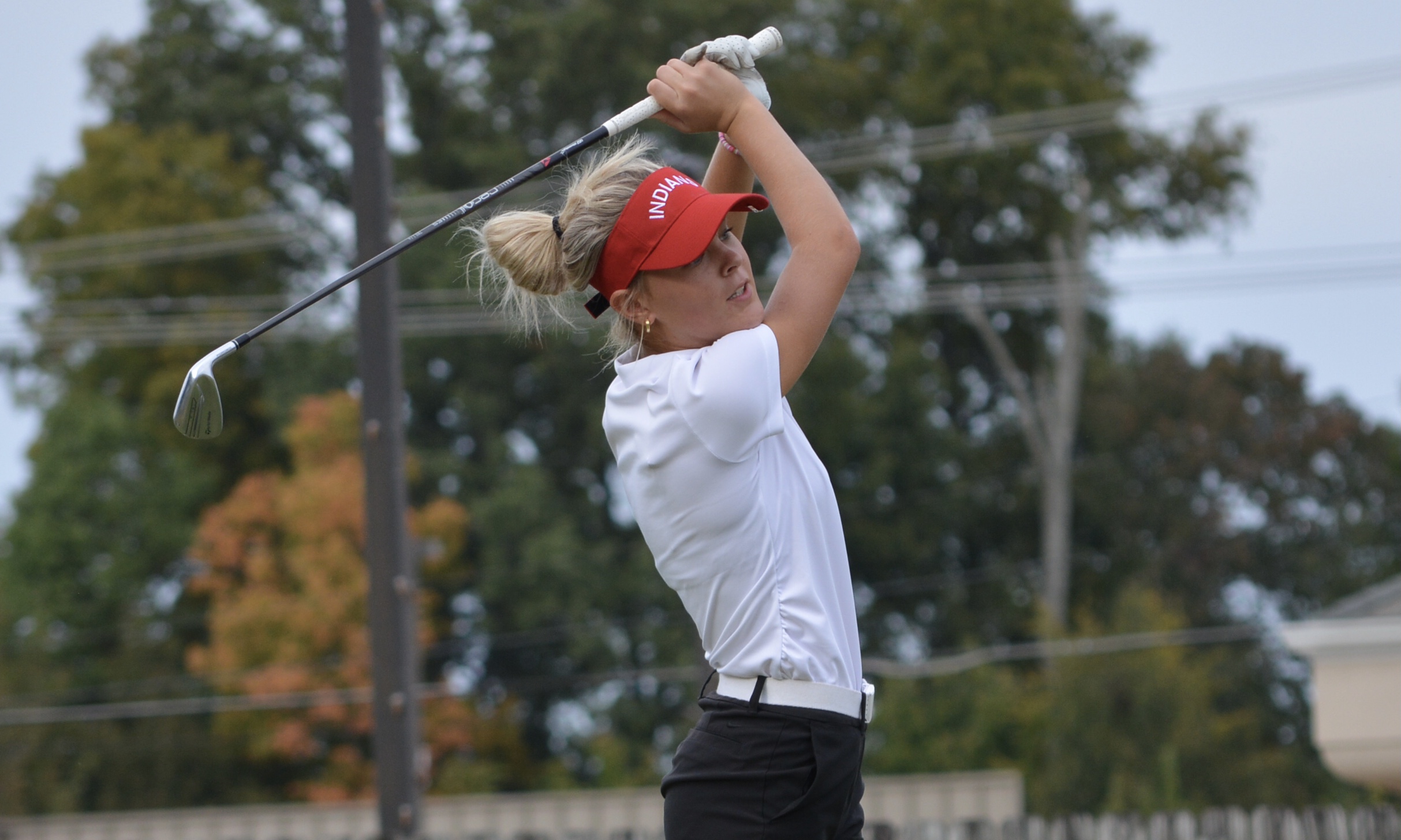 Senior Ella Overstreet placed first with a score of 31 in a tri match versus Notre Dame and Ste. Genevieve last Thursday at Kimbeland. Photo by Jay Forness

With only one week remaining until the start of the Class 2 District 1 Tournament, the two-time reigning district champion Jackson girls golf team is more than ready to defend its title.

The Indians have yet to lose a match this fall while taking home multiple tournament championships as the only time they didn’t place first was in the St. Joe’s Angel Classic. Jackson ended up placing second and was only five strokes behind host and tournament champion St. Joseph’s Academy.

Last week on Thursday, the Indians hosted a tri meet at Kimbeland Country Club against Notre Dame and Ste. Genevieve. Jackson placed first with a team score of 140 as the team’s six varsity golfers each placed in the top seven as three finished first, second and third overall.

Hitting the meet’s top score of 31 was Southern Illinois commit and Jackson senior Ella Overstreet, who did so by having birdies on holes one, three, six and seven.

Coming in second behind Overstreet was fellow Indians senior Kaydi Rhodes, who has also verbally committed to continue her college career as she will do so at Tennessee Tech. Rhodes scored a 34 to take second place as she recorded multiple birdies as well (holes seven, eight and nine).

Taking third for Jackson was another senior in Jacie Pattengill, who currently hasn’t committed to a school but fields several options. Pattengill came in two strokes behind Rhodes with a score of 36 by coming up with one birdie on hole five.

Notre Dame junior Paige Compardo finished one stroke behind Pattengill as she produced a 37. The Bulldogs took second in the meet with 166 points as freshman Eliza Barnette took ninth place at 41.

The final three Indians to place in the top 10 were sophomore Alana Gilbert, senior Kaycie Saysanan and junior Maggie Davey.

Gilbert took sixth overall with a score of 39 as fellow Jackson sophomore Harper Ready of the junior varsity squad took seventh at 38. Another member of the Indians JV team placed in the top 10 as junior Kaylin Stroud tied for 10th at 43 with Notre Dame junior Avery Bader.

Davey and Saysanan’s final scores of 40, which were tied for seventh place, weren’t included toward Jackson’s final score of 140.

As for the Ste. Genevieve Dragons, none of their golfers scored better than a 49 as junior Lani Yamnitz finished with that total.

To conclude the regular season, Jackson has three meets this week against Oakville Monday in St. Louis, a tri meet with Farm-ington and Ste. Genevieve today in Ste. Genevieve and lastly another tri match against Cape Central and Notre Dame tomorrow at Kimbeland.