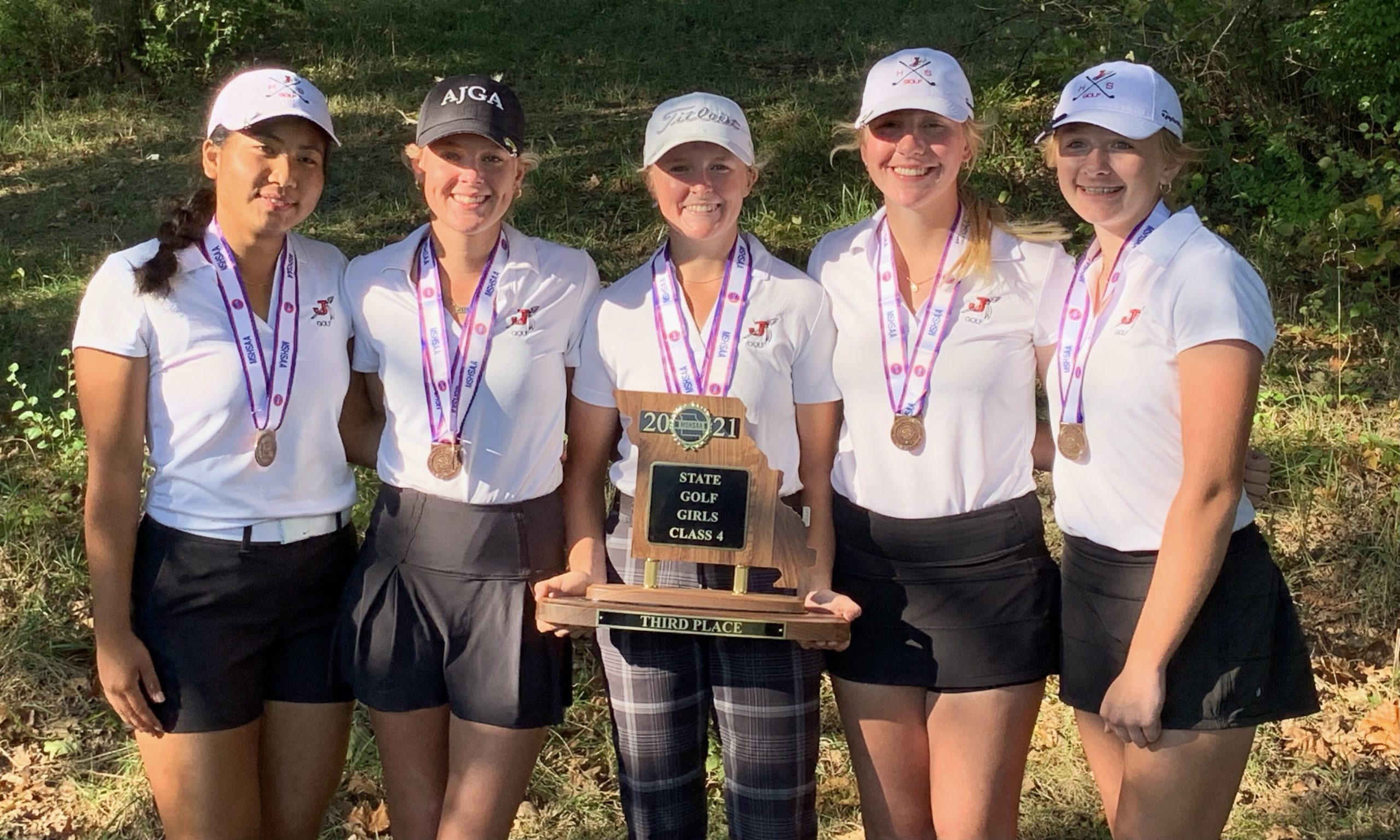 For the second time in the last three seasons, the Jackson girls golf team managed to place in the final four of the top classification in Missouri. The Indians did so by taking third place in last week’s Class 4 State Championship Tournament with an overall score of 646 points.

Coming away with the state championship was St. Joseph’s Academy with a 616 as Liberty North finished as the runner-ups at 630. Liberty North sophomore Bailey Burkett won the individual state title as she scored a 143 (70 round one, 73 round two) as St. Joseph senior Isabella Arro took second at 148.

Jackson recorded a team score of 322 or more each day as the Indians combined for a 324 in the first round and then a 322 to end the tournament, which was tied for the second best score on day two with Liberty North.

Even though Jackson’s ultimate goal was to win its first state championship in program history this season, the Indians still had fun competing at state and finished their season on a high note.

“I don’t think placing third is a bad deal whatsoever. I know the girls had their sights on first, obviously,” Indians first-year head coach Jim Brady said. “That was their ultimate goal, but finishing third in Class 4 — I don’t think it’s a bad deal.”

On top of Jackson making history by bringing home its second-ever state plaque, senior Kaydi Rhodes recorded the best state finish in program history by taking fifth overall at 152. She was tied for fourth after shooting a 75 in round one and finished fifth after hitting a 77 day two.

“She dominated, and that’s kind of what she’s been doing all year. She wanted to play even better on day one, which is totally crazy to me,” Coach Brady said. “She played her lights out and took each individual shot she made and made the most of it. It’s just awesome to have such a leader in our program not only lead on and off the course but by example when she steps out there and fires great numbers the first day.”

Rhodes, who finishes her career at Jackson as a two-time all-stater, has verbally committed to play golf at Ohio Valley Conference member Tennessee Tech.

Finishing in second for the Indians behind Rhodes was fellow senior Ella Overstreet, who became a three-time all-state honoree by tying for 15th place with a 162. Ella hit an 80 and 81 in rounds one and two, respectively.

“This is going to sound crazy, but I know Ella was a little disappointed in how she played both days, which is outrageous to me,” Coach Brady said. “I know she wants to be right up there with Kaydi, and I know she has the ability to do so and be in the top five. What a phenomenal golfer, and she’s been such a great kid to coach all year long. Much like Kaydi, she’s a leader off and on the course. Easy to coach and easy to be around.”

Overstreet will play college golf at Southern Illinois of the Missouri Valley Conference. Ella will be the second Indian to sign a golf scholarship with SIU in recent memory as 2020 graduate Carsen Silliman is currently on the men’s team.

Jackson’s next highest score was only one point below Overstreet’s total for 15th place as sophomore Alana Gilbert tied for 17th place with a 162. Gilbert recorded a 82 in her first-ever round of golf at the state tournament, and she then recorded an 80 to cap her sophomore campaign.

“Alana has been a spark plug for us, especially her just being a sophomore and finishing in the top 20 the first time you ever step on the state course,” Coach Brady said. “That’s phenomenal, and we only look for bigger and better things for her going on.”

Another Cash-Book Journal area golfer placed in the top 25 of the Class 4 State Tournament as Notre Dame junior Paige Compardo shot a 166 (82 round one, 84 round two) to finish in a four-way tie for 22nd place.

The final individual score that went towards the Indians final total was provided by senior Jacie Pattengill, who scored a 171 to come in at 29th place. Jacie hit a 87 on day one and improved by three strokes in the second round by hitting a 84.

“I knew she was definitely not happy with herself on day one, and I know how much she wanted to succeed for the team,” Brady said. “She’s the team bonder. Everybody wants to go hang out with Jacie. She brings along and includes everyone with her, whether you’re the No. 1 or No. 10. Jacie just wants the team to do well.”

Pattengill plans on playing golf in college and currently has several options, but she hasn’t verbally committed anywhere yet. Jacie, along with Overstreet and Rhodes, helped Jackson’s 2019 squad take third in Class 2 (only two classifications at the time) as a sophomore.

Senior Kasie Saysanan was the fifth and final Indian to compete at state for Jackson as she finished in a three-way tie for 58th place at 186. Saysanan finished with a 98 in the first round, but she came back and had a strong day two by improving her score dramatically with a 88.