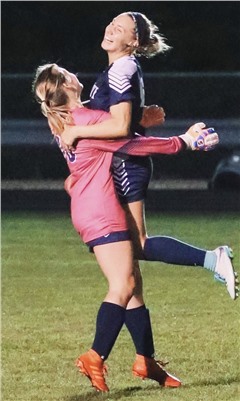 For high school athletes, their senior season is the last time they are able to leave a mark or perhaps achieve goals they have had since they were freshman. Spring athletes in the Class of 2020 may not get the chance to do either.

The Missouri High School Activities Association canceled all spring postseason activities due to the COVID-19 pandemic on April 9. Eight days later, MSHSAA voted to allow spring sports to happen over the summer if they are approved, cleared and deemed safe by the CDC as well as state and local governments.

However, there will likely be no postseason since these activities will be limited and happen late in the summer.

MSHSAA also voted to allow this year’s seniors to be viewed as enrolled students post graduation in order for them to participate in any activities held this summer.

While area seniors in Jackson track and field’s Caleb Craft, Notre Dame baseball’s Kam Dohogne and Saxony Lutheran girls soccer’s Sam Schnabel have mixed feelings about playing this summer, they all hope to have an opportunity to represent their school one final time.

Craft is coming off a junior campaign where he qualified for the Class 5 State Meet in the 110-meter hurdles and as a member of the 4×400 relay team. He also took home SEMO Conference, Class 5 District 1 and Class 5 Sectional 1 Championships.

As a team, the Jackson boys won the conference and district title as the Indians returned several key athletes this season like fellow seniors in all-state sprinter Aaron Brown and state qualifier Donya Marx.

“It’s nice to know there’s a chance to have the opportunity to run one or two more times for Jackson,” Craft said. “It’d be nice to have closure with my coaches and my teammates. It would just be fun to compete again.”

Dohogne was the Bulldogs starting ace pitcher last season in a year where he finished 5-3 overall with 51 strikeouts and an earned run average of 2.26. Dohogne helped Notre Dame win the SEMO Conference Tournament Championship and earned SEMO Conference Pitcher of the Year honors following the season.

“I think it would be nice to get that last chance on the field with all of [my teammates] and leave a mark on Notre Dame,” Dohogne said. “But I’m pretty committed to my summer team, so I’m not real sure how all of this is going to work out.”

Dohogne and some of his high school teammates are members of the Missouri Bulls, which is where Dohogne said players get recruited the most by colleges.

What is being considered to happen for sports like baseball, track, golf and tennis this summer are senior all-star games and meets, which would likely occur the week after the Fourth of July.

Craft and Dohogne will continue their athletic careers collegiately at Missouri S&T and Columbia College, respectively. Schnabel decided to pass on playing college soccer and will be pursuing a career in pharmacy at the University of Kentucky.

“It would be so special to play with my teammates one last time,” Schnabel said. “It was rough for a while because we thought we weren’t going to be able to play at all, so now that we have this chance, it’s really cool.”

Schnabel said one problem for soccer this summer is if there will be enough players to have a full team.

Schnabel will be moving to Kentucky for college on June 19, and there are currently three games scheduled for June 25-27 to be hosted at Jackson. These matches would be against conference opponents, and Schnabel said without a doubt she would return to town if these games are played.

“I know a lot of [seniors] thought it was inconvenient because it’s in the summer and so late,” Schnabel said. “There’s a lot of things seniors are starting to do for college, so they’re still excited but like, ‘This still sucks because it’s still interfering with my summer.’”

However, Schnabel let it be known she and the rest of Saxony’s seniors are excited for a chance to play as well as have social interaction before they go their separate ways in college.

Schnabel has played primarily as a defender on Saxony’s varsity team for the past three years. In the Class 1 District 1 Tournament last season, Schnabel stepped up as Saxony’s goalkeeper, where she shutout St. Pius X and stopped three of the team’s five penalty kicks in the semifinals.

Schnabel’s performance helped send the Crusaders to the district championship game for the seventh season in a row.

As for no postseason this year, Craft talked about how that is when athletes are performing at their best so the competition is at its peak. “Considering the circumstances, I’m just excited for whatever we get to do.”

Dohogne said every baseball player he knows looks forward to the postseason, and that it is when the sport matters the most to him personally.

Schnabel and the rest of Saxony’s seniors on the girls soccer team like three-time Class 1 Player of the Year Emma Brune and fellow three-time all-state honoree Makayla Mueller wanted to win their first district title with the program this year. When they were in eighth grade, the Crusaders won a second-straight district and state championship.

Schnabel, like Craft and Dohogne in their respective sports, has played soccer for most of her life, so she hopes to have a chance to finish her athletic career properly. Each of these seniors still know there’s the possibility nothing could happen at all, though.

“I’ve been disappointed so much that if I find out it won’t happen after all, I guess I can’t be let down anymore than I already have been,” Schnabel said. “I think since the restrictions are starting to come down, I’ll hopefully still be able to come in contact with some of my teammates even if it isn’t playing games and stuff.”