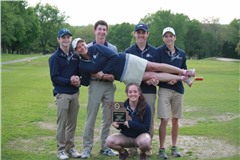 The Saxony Lutheran golf team took first place in the 2017 Class 2 District 1 Championships with a score of 375 on May 2 at Terre Du Lac in Bonne Terre.

This is the second year in-a-row Saxony has won the district championship with Karsten Short placing second overall in the tournament with a 85.

Placing first in the meet was Arcadia Valley’s Jon Inman with an 84, but Acardia took third place with a 417 total by only having one other golfer place in the top 15 to earn All-District honors.

Right behind Short in third place in the meet was Ben Daniel with an 86 by scoring 42 in the final round.

The rest of Saxony’s top five scored in the 100-plus column with Olivia Voelker and Luke Daniel tying for 12th place at 102.

Coming in last for Saxony was Jonathan Mueller, who hit a 110 for no place.

Short, Daniel, Voelker and Daniel each earned All-District honors with their respective placings.

Coming in second place at the tournament was West County, which scored 383 with having four of their top five finishing in the 90s.

Prior to this tournament, Saxony competed in the SEMO Conference Golf Tournament on April 24 where the Crusaders tied for fifth place out of the 12 total teams in competition.

Taking first place in the conference meet was Poplar Bluff, which had four golfers place in the top 10. Two Mules also finished under 80 with Nathan Woolard placing first at 73 and Justin Pierce second at 77.

Ben Daniel finished with a team-high 90 as Short had the second-highest score for Saxony at 93.

Luke Daniel was the only other Crusaders to hit in the 90s with a 94 as Mueller finished with a 102 and Voelker at 104.

Daniel medaled in the Crusaders meet leading up to the conference tournament with a 38 where Saxony took first place at the Bloomfield Quad on April 19.

Saxony will now compete as a team at the Class 2 Sectional Golf Tournament, which will be hosted by Dalhousie on May 8 in Cape Girardeau.

If the Crusaders are able to advance, the Class 2 State Championship Golf Tournament will be hosted from May 16 to May 17 following sectionals.