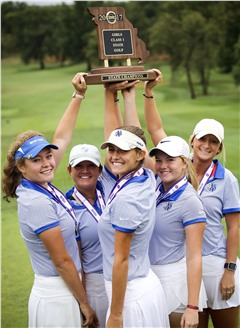 The Cape Notre Dame girls golf team did what every high school team in the nation strives for, and not just once but twice.

Notre Dame won its second-straight Class 1 State Championship in one round of golf due to inclimate weather canceling day two.

Also placing in the top five for Notre Dame was sophomore Taryn Overstreet, tying for fifth place at 83, who took sixth in last year’s tournament with a combined score of 158 (80, 78).

Head coach Mark Moore is only in his second season at the helm for Notre Dame, and he credits these two state titles due to the team he inherited.

Both Bell and Bray had qualified for state their freshman and sophomore seasons, and Moore heard his incoming freshman Overstreet was going to make quite the impact in 2016.

“I knew the first year had the makings of something special,” Coach Moore said. “Didn’t know exactly what it would be until we started playing, and they went undefeated that first year.”

This made the expectations for the 2017 season even higher with every golfer returning and the fact the Bulldogs had won state by 40 points the year before.

Coach Moore said it was difficult trying to keep his team motivated and focused because the team was relaxed this year thinking it would be no problem to repeat.

Bell suffered an injury and was out for a few weeks, leading the team to lose a match and place second in a couple tournaments.

“I think that helped keep them focused and helped the girls at the back end of the lineup be ready to go for the postseason,” Moore said.

Moore said seniors Haley Taylor and Olivia Williams played some of their best golf in the postseason as each placed in the top 10 of the sectional tournament.

Coach Moore said it’s not the talent he will miss from these graduating seniors, but how much fun they were to be around.