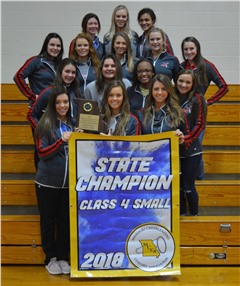 Every single competitor hopes to one day become a champion of some sorts, and the Jackson cheerleading squad did just that. In fact, these girls won the top championship they possibly could.

On Saturday, Dec. 1, Jackson competed in the Class 4 Small Division and took first place with a score of 333.3, edging out second-place Fort Osage by 1.4 points (331.9) to win this year’s state championship.

While practicing for these two competitions, the squad is also attending numerous Jackson athletic events to cheer on the other teams.

“Personally, it gives me something that I can talk about because I know my family comes to the games to watch me and everything, but I don’t get to perform anything really,” senior Maddie Scott said. “It’s like something our families can watch and get to be proud of something for the first time. It’s not like the basketball team winning, and we’re there. It’s us winning individually.”

For fellow senior Caroline Hume, she said there are plenty of moments throughout a person’s life where they’ll feel accomplished, but this is something all of Jackson can look at and be proud of what this squad did.

This happens to be the first state championship in program history for the Indians after basically having to learn an entire new routine two weeks beforehand.

The squad knew in order to win state they had to up their difficulty level even though they had won the five-team competition at regionals. Jackson Head Coach Jana Scott said they also looked at the score sheets from that competition and took recommendations from the judges on what the team needed to work on.

“We didn’t just tweak it — we completely changed it,” Coach Scott said. “Our pyramid I would say was the highlight of the whole routine because it had so much going on. We got a lot of complements on our pyramid and the whole routine.”

On top of winning state, three Jackson cheerleaders garnered all-state honors, which were Hume, Scott and Walker. These three are the only seniors on this year’s squad, and they all were able to step up and lead Jackson to a historic win.

Walker said she and the rest of the cheerleaders knew they would have to step out of their comfort zone in order to have a chance at winning state. They all agreed the routine they performed at the regional competition was “too safe.”

“For our state routine we added a lot of tumbling, and I didn’t know I could tumble that much in a routine until I did it at state,” Hume said. “I just thought that was a lot more impressive at state — we had a lot of girls tumbling.”

In May before Jackson began offseason training for this year, Scott asked her team, “Do you want to compete?”

The last time Jackson competed at state was five years ago and placed second overall. Coach Scott said the drive of this squad was the key factor in winning state.

When the seniors heard their names called as all-state recipients, they didn’t even know it was something they wanted until it happened and were actually thrown off by it. Coach Scott also made sure not to mention she had nominated the three seniors to be in the running for the honor.

“We were like, ‘Do we walk up there?’” Walker laughed.

There were specific judges watching the three seniors aside from the judges scoring the routine while they performed to determine whether or not they deserved the recognition. Hume, Scott and Walker were judged on their tumbling, jumping and dancing as well as their basing skills and level of expertise.

Their school leadership and overall character were also taken into consideration.

“They were still celebrating the fact that we had won state [when they were named all-state],” Coach Scott said. “Them getting all-state was the icing on the cake, and what I loved about it was it truly highlighted the skills I knew they had, the leadership qualities they had and it was the perfect thing for their senior year.”

Walker described the state competition’s atmosphere as “hot” because everyone is sweating and waiting in the practice room for hours in anticipation of performing. Walker said when she walked out on the stage she saw her parents and every other team that had already participated watching as it was their turn.

“My favorite thing is when we hit a stunt, everybody just screams for us because sometimes it’s hard to hit your stunts — it depends on what you’re doing,” Walker said. “I love when they scream when you hit your stunt or somebody throws a full or you have a really cool pyramid. It’s just awesome because everyone who’s there loves cheer, and they love to watch us put it all out on the floor.”

Maddie Scott, who is also Coach Scott’s daughter, said it is satisfying when someone cheers for her and the rest of the team because they normally don’t get the recognition while cheering for other teams.

“The most nerve-wracking part is if you’re playing football and you’re losing in the first half, you have a whole other half to come back,” Hume said. “If you’re competing in a cheer competition you have one chance to do what you know you can and prove to everybody and win. You can’t come back from it — it’s win or lose.”

Football games in high school are a total of 48 minutes and basketball games are eight minutes. Jackson’s routine for state was only three minutes.

Coach Scott said the routines go by fast and that if someone makes a mistake there is no coming back from it.

“In the practice room, we were not hitting our stunts, and it was a little nerve-racking,” Coach Scott said. “The competition was running really far behind, and it was actually to our benefit because it gave us time to calm down and talk through some things.”

Coach Scott first apologized to her team before delivering the message she had for them because she said she was sorry that she had any doubt. She said she had to have faith in her squad because of all the hours it put into the routine before state.

That was the message she gave her team before the state routine that she was going to be proud of them no matter what.

Now when Jackson fans are in attendance at any athletic event and see this squad on the sideline, they will be looking at state champions.

“Winning state was the biggest accomplishment of my life — it was the coolest thing that I’ve ever done in my life,” Hume said. “… Winning state will top [graduating from college.]”