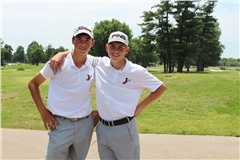 Jackson golf sophomores Case Englehart and Tanner Walton each placed in the top 60 at this year’s Class 4 State Golf Championship tournament held on May 15 and 16 in Joplin, Missouri.

Englehart, who competed at state his freshman year and placed 78th overall, tied for 30th place by shooting a 159.

This was the first state tournament for the 2017 Class 4 District 1 Champion Walton, who tied for 60th place with a 167.

The mindset for day one according to head coach Zack Walton was for each golfer to shoot around 75 or 76 with the goal of placing in the top 15 to earn All-State honors.

“We came out and shot 78, 79 on day one, which we thought, ‘It’s not bad. Let’s go ahead and we try and press a little bit if we want to get in that top 15, and we need to try and shoot 75 or less now,’” Coach Walton said. “I don’t know if the pressure got to them a little bit or sometimes golf is golf and you just don’t play well. Things didn’t go very well for either of them and they shot in the 80s [on day two].”

Englehart shot an 81 while Walton shot an 88 to finish the season.

“Still it wasn’t terrible, but not what they really wanted to do,” Coach Walton said. “But just the accomplishment of getting to state from doing well in districts and then going through that tough sectional to get out and into state was pretty impressive.”

Englehart and Walton both qualified for the state golf tournament at what their head Coach Walton called the most difficult sectional in the state this season.

The cut off to qualify for state at the Class 4 Sectional 1 tournament was six over a par of 72.

Before talking about how Englehart and his son Tanner finished the season, Coach Walton discussed the hard work each of these golfers have put in to get to this point.

“They’ve been playing golf since they were little bitty. I’ve been fortunate enough to see those two — Case being a good buddy of Tanner’s and a good family friend,” Coach Walton said. “To see those two out there working at their game and playing Junior PGA since they were probably in second grade, third grade probably. To see them progress and really get a lot better through the years, and to see some hard work pay off as coaches we like to see that.”

At sectionals, Englehart tied for 11th place by shooting two over par after having back-to-back bogeys on the final two holes. Englehart was even at 72 heading into the 17th hole, which would have tied him for fourth place had he not bogeyed.

“… You had to play pretty well to get out. We knew that going into it that it was going to be a tough sectional, so our kids were really just trying to focus to qualify,” Coach Walton said. “Case played really well the whole day — think he just had a couple bogeys at the very end to shoot two over. Still had a great round and stayed pretty consistent all day.”

Following winning districts with three over par of 70, Walton did not fair well on day one of sectionals by shooting six over par.

“So I knew as a coach and a dad that, ‘Uh oh. Six is probably going to be really close to the cutline — I’m not sure if he’s going to make it,’” Coach Walton said. “‘He’s going to have to go to the back nine now and shoot even, and after coming off that I’m not real sure he’ll be able to do that.’”

Walton shot three under par on the back nine to finish three over par to qualify for state and tie for 15th place at the sectional meet.