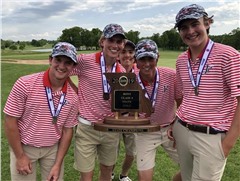 The Indians capped off their undefeated season by winning the Class 4 State Championship Tournament with a score of 611 and had three golfers finish in the top 25 to garner all-state honors.

Seniors Case Englehart and Tanner Walton each placed in the top 15, while sophomore Carsen Silliman tied for 22nd place. Englehart finished with a score of 150 to tie for seventh as Walton was one stroke above at 151 to tie for 13th overall.

Silliman suffered a broken foot on day one of the tournament, but the injury didn’t stop him from helping lead his team to a state title by recording a score of 155 to finish in a four-way tie for 22nd.

The final full score the Indians used to win was senior Jaden Hightower’s, who enrolled at Jackson last year, of 156 as he tied for 26th place.

After day one, Jackson was second overall with a total of 307 down by three shots to Lafayette’s 304. The Indians didn’t even use Walton’s day-one score of 79 as junior Seth Waters was able to hit a 78.

“You have to give credit to that golf course — it was a tough golf course,” Jackson head coach Zach Walton said. “That back nine for all of the kids was tough, and that’s what was really the turning point. They played well on the front, but they struggled on that back. It was not an easy course, which is what you kind of want.”

Coach Walton said he and the rest of the team knew they didn’t play very well on day one, so the mentality had to change to, “Let’s go get it.” He noticed the team’s demeanor switch the night before day two.

Walton came back on day two and tied for the best score of the final day by hitting par at 72. The golfer Walton tied with was Marquette’s John Cronin, who finished as the tournament runner-up behind individual state champion Dawson Meek of Glendale.

Coach Walton said he needed one of his golfers to score in the low 70s to win the tournament, which has usually been Englehart this season. Englehart won both the individual district and sectional titles this year as he was six under par at the sectional meet with a 65.

Englehart finished with a 74 on day one of the meet to help lead his team to second heading into day two, which is where he had his biggest moment of the tournament and perhaps his life.

“Once I was done with Tanner, I walked back out and I caught Case putting on [hole] 15,” Coach Walton said. “He looked a little bit frustrated because he said he hadn’t made a birdie yet on that day. I told him, ‘This is state. It’s time to play,’ and that we just needed some pars and it was going to be close.”

Coach Walton said this talk motivated Englehart, who started hole 16 with a nice drive over the green and chipped the ball on to make par. He then made par on 17 as well.

“While he’s walking back up the hill [for hole 18], he had his driver out of his bag and is walking up towards me,” Coach Walton said. “He sees me look at my phone to see where the score is, and I don’t say anything to him, but he asks me, ‘Coach, where are we?’ I think he could tell by the look on my face, and I said, ‘Case, it looks at this point right now we’re down one.’ He just looked at me and goes, ‘I got this.’”

To start hole 18, which was par five, Englehart drove the ball 320 yards in a 15-yard fairway. The only negative was that the ball went to the right side of the fairway where a tree sticks out.

Englehart told Coach Walton with confidence that he would be able to hit a cut around the tree, but when they reached the ball, Case noticed another option.

They both talked about whether or not Englehart should play it safe and go for par, but Case knew he needed a birdie at that point and decided to take the shot through a narrow opening above the tree limb.

“He hit 3-wood through this little, narrow gap and put a little baby fade on it 275 yards because he flew the green by maybe two or three yards,” Coach Walton said. “He and I were fist pumping each other a little bit, and he said, ‘Coach, that’s the best shot I’ve ever hit.’”

The green for hole 18 was 15 yards with a downhill slope, so it was not as easy of a chip as Coach Walton and Englehart thought. If the ball was just bumped onto the green it could’ve either come up short or rolled off.

The ball was too close to the green to allow Walton to talk with Englehart anymore due to MSHSAA rules, but he could tell Case was going to attempt a flop shot.

“It’s probably the shot that needs to be hit, but it’s just a little risky and it makes everybody nervous,” Coach Walton said. “Case has practiced that shot a lot — he loves it. I felt confident that he was going to hit it because he’s practiced it so much.”

Englehart indeed took the flop shot as the ball stopped about four feet from the hole, which allowed Case to then putt the ball for a birdie.

After the tournament, there was a 15-minute wait period for the final results to come in, which felt like “hours” to the team.

“Eventually they got it and made it official,” Coach Walton said. “It was pretty exciting to look at the boys and call them state champs.”