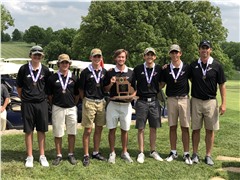 This was the first time the Indians reached state as a team since 2003. Jackson did not place in the top four to earn a state plaque that year.

This year’s team became the first squad in Jackson boys golf history to earn a spot in the top four to bring home state honors.

The Indians did so by scoring a combined 618 points behind state champion Rock Bridge (582), runner-up Chaminade (605) and third-place Rockhurst (607).

Rock Bridge had a total of three golfers place in the top 10 with the team’s very own Ross Steelman taking first with a 136 to win the individual state championship.

Only one golfer from Jackson was able to place in the top 15 to earn all-state honors, which was junior Tanner Walton.

Walton, who won his second-straight district title to start the postseason on May 2, hit a 74 on day one followed by a 75 on day two for a combined 149 points to tie him for ninth place. He placed 60th last year, hitting a 167.

Only one other golfer placed in the top 20 for Jackson as freshman Carsen Silliman hit a combined 152, 77 on day one and 75 on day two, to tie for 17th overall.

Junior Case Englehart was the third top finisher for Jackson by tying for 34th place with a 156 as he recorded an 80 the first day with a 76 to follow. Englehart finished 30th last season with a 159.

Next was junior Jaden Hightower, who placed 62nd overall in a three-way tie at 161 by hitting a 77 the first round and then finished with a 84 on day two.