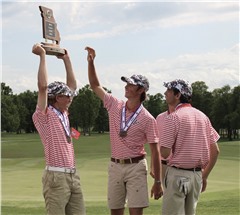 According to Jackson boys golf senior Case Englehart, winning the Class 4 State Championship was like the ending of a good movie where the characters ride off into the sunset.

It has been a long film for Englehart and fellow seniors Tanner Walton and Jaden Hightower — one that started before they were teenagers and stepped onto a golf course for the first time.

Englehart and Walton had played golf together for about a year before Hightower moved to Jackson, which is where the story began. Walton recalled when he and Englehart first met Hightower at 10-years-old in the Junior PGA at the Cape Country Club.

“Jaden went out and won the tournament, and that’s all Case and I talked about for the next week was beating Jaden,” Walton laughed.

Tanner’s father and the team’s head coach Zach Walton can attest to that by recalling their conversations in the car, which usually went something like, “Man, I hope Jaden’s not here so we can get first.”

Hightower was home schooled up until his junior year when he decided to attend Jackson. Jaden was happy he did so because he didn’t have to play alone anymore, and he was able to make some life-long memories along the way.

“We knew when Jaden was coming in it was going to be a nice little surprise to everybody else,” Englehart said. “Jaden won the first tournament he was in.”

Since Jaden’s arrival to Jackson, the Indians have only lost once, which was last year’s state tournament. Jackson was still able to take fourth place for the program’s first-ever finish on the state podium.

Walton placed ninth with an overall score of 149 to garner Class 4 All-State honors for the first time in his career. Then freshman Carsen Silliman (152) finished with all-state honors as well by tying for 17th place, while Englehart (156) took 34th and Hightower (161) 62nd.

Jackson finished with a total score of 618 to take fourth, and this was 36 strokes behind first-place Rock Bridge. However, the Indians knew they could have won the tournament if they had just played better.

The seniors also felt like they weren’t mentally prepared for last year’s state championship, but this year they were all honed in on bringing the title home.

“I think confidence was key because anytime in a pressure situation, you’re confident that you’re the best team and the team that under pressure is going to perform and prevail,” Englehart said. “Ultimately, you’re going to come out on top more than not.”

That was the story for Jackson’s 2019 season as it won the SEMO Conference, Class 4 District 1 and Class 4 Sectional 1 Championships for the second-straight year.

The Indians also came away with a third-straight individual title at districts as Englehart won this year’s tournament by hitting two under par at 70. Walton took home the previous two titles.

Englehart also went on to win the individual championship at sectionals as he hit six under par with a score of 65. Hightower, Silliman and Walton tied for 10th by hitting four over par at 75.

After the first day of this year’s state tournament, Jackson trailed Lafayette by three strokes. The Indians had defeated Lafayette earlier in the year, so they were confident they could make a comeback on day two.

Walton’s score of 79 was not used on day one since junior Seth Waters recorded a 78, so the senior knew he had to step up on day two for Jackson’s dream of a state title to be achieved.

Walton did more than step up as he tied the top score of the final day by hitting the course par of 72. This tied Walton for 13th overall to finish his high school career as a two-time all-state honoree.

Englehart finished as the top scorer for Jackson with a combined score of 150 to tie for seventh place, while Silliman earned all-state for the second year in a row with a 155 to tie for 22nd.

Hightower finished one spot away from earning all-state honors at 26th place with a 156, but without his score the Indians wouldn’t have won the state title.

The three seniors agreed they are all sad about their high school careers being over now. Walton added he overlooked every other season ending because there would be another one to follow until this year.

“So we just kind of rode off into the sunset, except we had a trophy in our hands,” Englehart said.