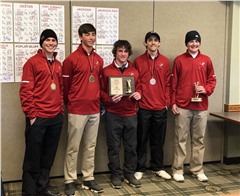 The Jackson boys golf team has won every contest it has participated in this season while even setting a new school record score of 293 on April 2 at Sikeston.

This was when junior Case Englehart hit one under par at 70 to win his second individual title while freshman Carsen Silliman scored an even par of 71 at Fox Haven Country Club. Juniors Tanner Walton and Jaden Hightower each hit five over par at 76.

Englehart has now won three total individual championships as Hightower, Silliman and Walton have won as well. Englehart and Walton tied for the Farmington Invitational’s top honor as both golfers shot 75 April 4.

Hightower won his title with a score of 72, helping lead Jackson to a 301 to win the Notre Dame Invitational March 26. Silliman’s first title of his high school career came recently as he hit a par of 71 at the Poplar Bluff Invitational April 9.

Heading into the season, Coach Walton said he knew he had two players he could rely on in Englehart and Walton. Both were state qualifiers last season, where they each placed in the top 70 as Walton also won the Class 4 District 1 Championship.

“So I knew I had two returning good players, and then Jaden Hightower was a homeschool kid, who is now enrolled at Jackson this year,” Coach Walton said. “He’s the same age as Tanner and Case — I’ve seen him play and he’s been playing with Tanner and Case since he was little. We knew he was a good player, so we were excited to have him coming.”

Coach Walton continued to say he knew his fourth individual champion, Silliman, was a good player since he saw him golf during the summer.

“We were excited to get [Silliman], and he’s done really well for us this year as a freshman coming in and putting some good scores in here and there for us,” Coach Walton said. “So far things are going well, but we just need to be able to play well all together on the same day. That’s just team golf, and that’s kind of difficult sometimes to do.”

On Monday, April 16, Jackson hosted its own invitational where it took first place once again with a combined score of 306. Silliman took home the individual championship with a 73 while Englehart, Walton and Hightower each placed in the top 10 as well.

Walton said he believes if his team is able to do this that it should be able to win a district championship as well as qualify for state at the sectional meet.

“Our sectional is going to be the toughest sectional out there,” Coach Walton said. “If we can get out of sectionals as a team then anything can happen at state. We could play really well there and hopefully get in that final four, but we’ve got some potential to do well.”

At districts last season, Jackson took fifth place with a 325 where Walton hit three over par (70) to win the title.

This failed to qualify Jackson as a team for sectionals, but Englehart tied for 11th by hitting two over par and Walton came in 15th with three over par.

The Class 4 Sectional 1 Champions was Chaminade, which ended up placing third in the state meet behind state champions Rockhurst and runner-up Glendale.

As a golfer himself, Coach Walton is at Kimbeland Country Club quite a bit throughout the year. Every time Coach Walton is on the course, he said he sees his players there as well.

“Those boys are out here six, seven days out of the week from sun up to sun down sometimes,” Walton said. “That’s what is really fun is to see the hard work pay off for some of these kids. They’ve been playing for a long time — it’s not just something they picked up last year.

“They’ve been doing this since they were little, and for each one of them to have three other guys around them that can play just as well as they can makes our practices pretty competitive.”

Before the postseason begins, Jackson will compete in the Mehlville Invitational Saturday followed by the SEMO Conference Tournament Monday.

“We have to look at everyday as a new day,” Coach Walton said. “When things aren’t going your way, one thing we preach to them is the grind. Get in there and grind, continue to hang in there so you can bring in a decent score for us. Then rely on your other teammates to come in there with something really low. That way we can still shoot a good team score and have a chance to win.”