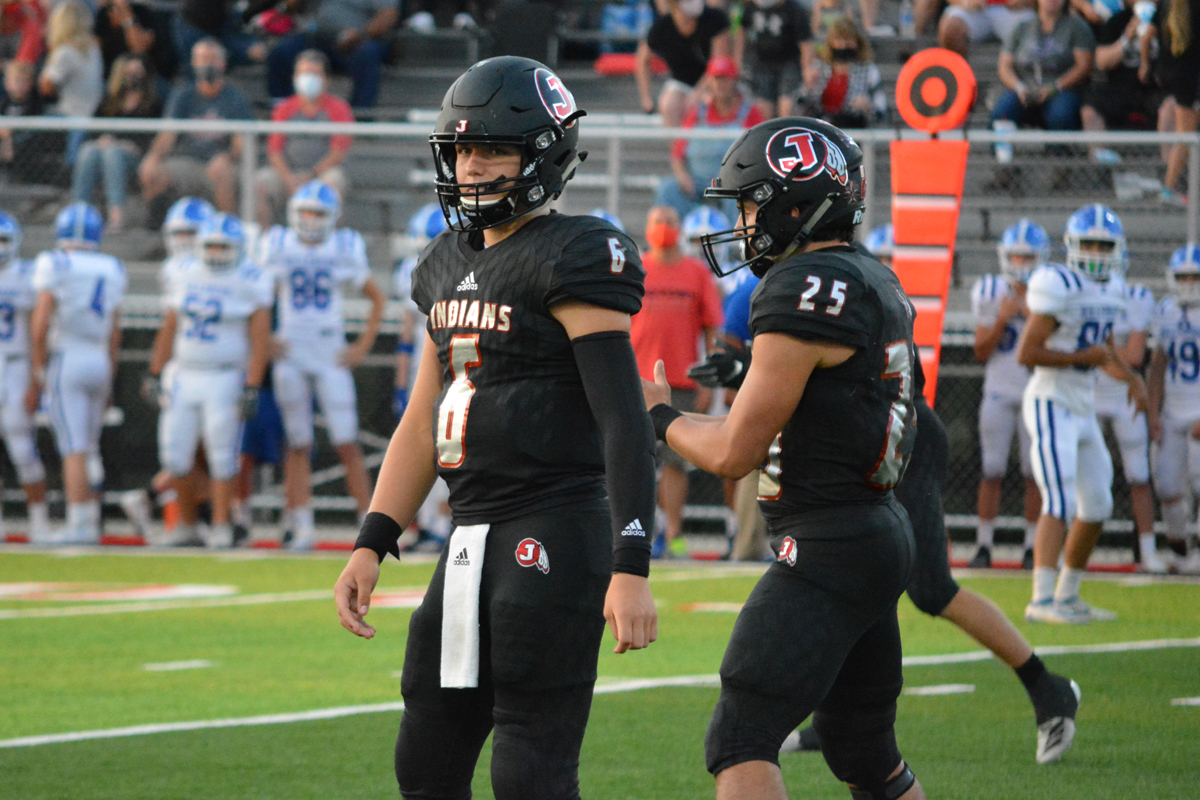 Welker led the Indians to a perfect, 14-0 season capped off by winning the Class 5 State Championship — the team’s first-ever state title. Following that, Cael was named the Class 5 Offensive Player of the Year and earned all-state honors for the third consecutive and final time of his high school career.

Statistically, Welker managed to go the entire season without throwing a single interception on 209 passing attempts, which no previous starting quarterback for Jackson had ever accomplished in the program’s 125-year history. Cael also completed 72.2% of his throws for 2,508 yards and 38 touchdowns while scoring 15 more times on the ground off 86 carries for 552 yards.

The cherry on top of all of that came last week when Welker’s mother informed him that he had officially been recognized by USA Today as one of the best high school football players in the entire nation for 2020.

The nationally-acclaimed publication picked an offensive and defensive player from each state to be national honorees for the first USA Today’s High School Sports Awards Show, which will stream on-demand on the show website at 7 p.m. tomorrow.

Welker, of course, will be watching the show hosted by former NFL stars and Super Bowl Champions Michael Strahan and Rob Gronkowski while on a family vacation in Destin, Florida. He will be presented along with the other nominees, and then the top-three finalists will be featured, one of which will be named the national athlete of the year in their sport.

“It means a lot and feels really good because all of the hard work and everything I’ve put in — it obviously paid off,” Welker said. “I just showed up, put the work in and went out on the field and performed.

“I really didn’t expect to be that good, but it just kind of happened. It feels really good to say that I’ve won all these things and now to be put in the position to win this — it feels pretty good.”

One of the reasons why Welker indeed became “that good” was because he genuinely loved practice. This was something his now former head coach Brent Eckley always mentioned whenever asked why his quarterback had as much success as he did during his career.

“I thought practice was fun. Just every day being able to go out there with your friends and play against them, and they’d talk trash to you,” Welker laughed. “I might be the only one who enjoyed practice. It helped us out a lot because we were going against the best defense in the state every single day. They pushed us, and it was just really fun for me.”

This type of daily approach for the Indians not only resulted in a undefeated season, but they beat every single team they faced by no less than 24 points. All but one of Jackson’s games — including the state championship — ended with a running clock because the Indians were up by at least 34 points.

The three defenders named all-state for Jackson were none other than 2021 graduates and inside linebackers Bryce Norman and Randol McDowell along with senior safety Flint Guilliams.

Offensively, the Indians averaged 55.6 points per game for a total of 779 as the defense only allowed 165 points (11.7 per game) all season and produced three shutouts. Jackson never scored less than 42 points or allowed more than 32 in a single game in 2020.

“Every practice when we got to team [drills], it was almost game-like,” Welker said. “The defense didn’t want us to do anything, and we wanted to score on every play. Sometimes it got a little overheated, but it helped more than anything going against our defense because they were better than anybody else we’ve ever seen.”

For his career, Welker finished fifth all-time in Missouri high school history for passing touchdowns at 121, and he is currently ranked ninth all-time in passing yards with 8,594.

It takes quarterbacks hours upon hours to learn their team’s playbook as well as every route their receivers will run on any given play, and Welker said once he learned it, he had it. “I knew what was going to happen even before I even caught the snap, so all of those reps and times I spent [learning the plays and routes] made the offense really fun and easy for me,” Welker said.

Cael gives much credit to the offensive linemen who have protected him over the years like Tollison and Flinn, who are both Division-I caliber players. Tollison plays football at Missouri, while Flinn has received three Division-I offers from Eastern Illinois, Murray State and Southeast Missouri State.

Welker also said the receivers he’s had during his career made his job of throwing the football a lot easier since ones like Turley and Liley made numerous acrobatic catches. These two combined for 95 receptions, 1,800 yards and 28 touchdowns this past fall. Cael said he started developing chemistry and timing with his receivers by practicing with them starting last January before the season began in August.

“Kannen’s routes were perfect — he made me look good sometimes. I didn’t even have to throw a perfect pass because he’d find a way to catch it,” Welker said. “Same way with Rhet. He’s so big that I could just throw the ball somewhere around him, and he’d bring it in.

“It was really nice to be able to have a couple people who could make you look really good when sometimes your throws aren’t very good.”