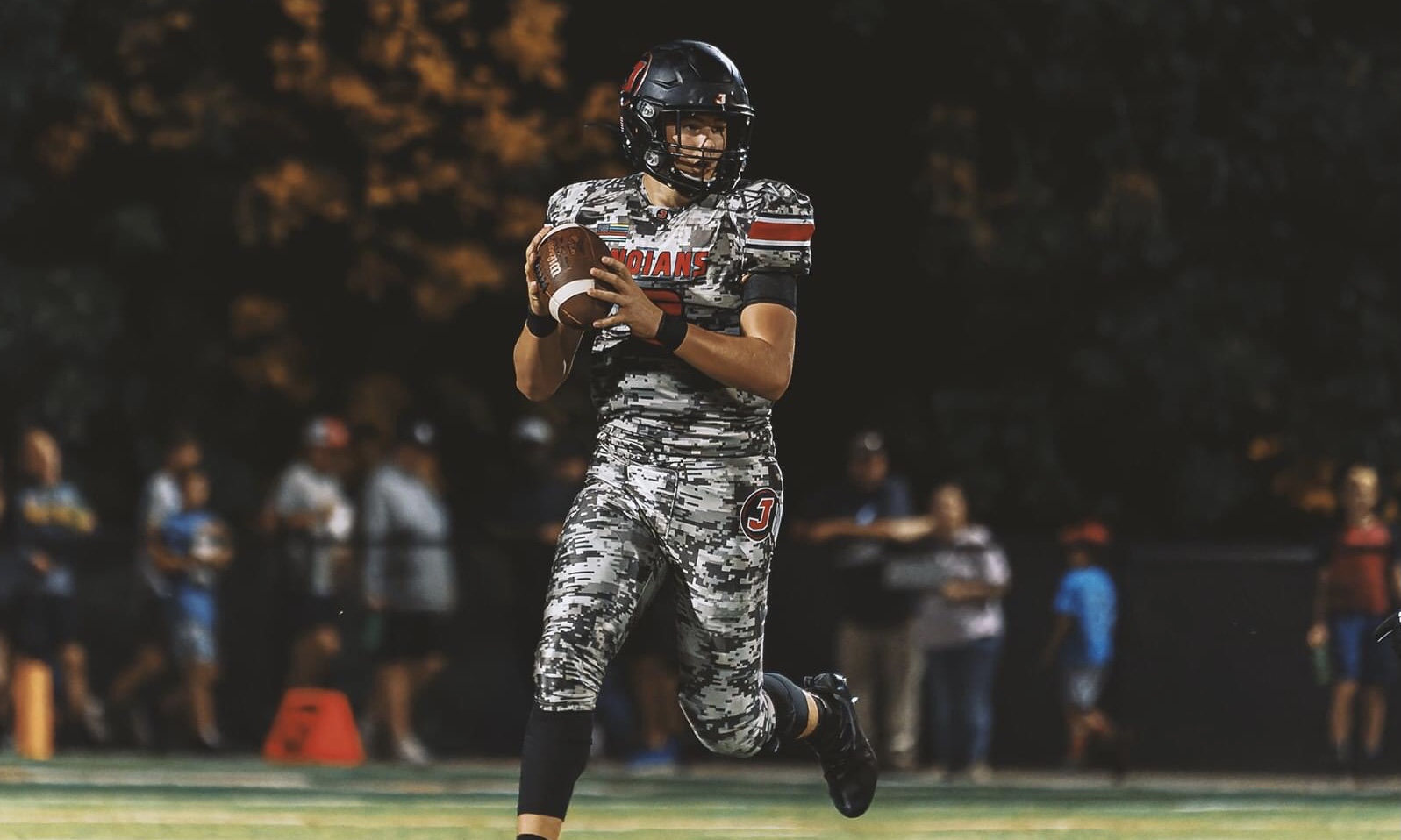 Senior quarterback Cameron Marchi threw for a game-high 201 yards, one touchdown and finished 24-of-40 (60%) in his final high school game. Photo by Darren DeLoach

The Jackson football team had a chance to become the first Indians squad in program history to reach three-straight state championship games this weekend but the Indians fell short of accomplishing this feat.

Even though Jackson entered the game with a perfect, 11-0 record compared to its opponent’s mark of 9-3, the Indians were still tasked with facing arguably the best high football program in Missouri history: Webb City.

Jackson also had to travel five-plus hours the day before Saturday afternoon’s Class 5 state semifinal at Webb City, but the Indians had hosted every one of their postseason games up until then.

With that being said, the 15-time state champion Cardinals made quick work of Jackson’s defense in the first half and held a 28-6 lead going into the locker room. Webb City’s option offense amassed 306 total yards before halftime as 210 of those yards were on the ground.

Leading the Cardinals rushing attack was senior running back Cade Wilson, who finished with a game-high 116 yards and four touchdowns on 16 total carries (7.3 yards per run).

Webb City won the time of possession battle by nearly five minutes as fellow senior running back Dupree Jackson and senior quarterback Cohl Vaden combined for 133 yards on 29 attempts. Jackson scored the other touchdown for the Cardinals as he did so with less than two minutes left in the first half.

Even though Vaden failed to throw a touchdown pass, he still had just enough success through the air for Webb City to have a well-balanced attack offensively. Vaden only threw the ball 11 times but completed six for 129 yards while not throwing an interception. His leading receiver was junior wide receiver Dante Washington, who hauled in a game-high 71 receiving yards with just three catches (23.7 yards per reception).

Jackson’s offense only had 94 total yards following the first two quarters of play as the Cardinals defense forced the Indians to punt twice throughout the first half. Senior quarterback Cameron Marchi scored Jackson’s lone touchdown in the first half with a 2-yard run on a fourth-down attempt.

After forcing Jackson’s offense off the field to start the second half, Webb City scored its fifth and final touchdown of the game as Wilson broke off a 21-yard run for the score. This gave the Cardinals a 35-6 lead with six minutes, 57 seconds remaining in the third quarter.

The only other team to have scored 30 or more points on Jackson this season was conference and district rival Poplar Bluff at 32 back in Week 3. Since then, the Indians hadn’t allowed any opponent to score more than two touchdowns.

Jackson’s defense stood its ground the rest of the game, though, as Webb City only recorded a total of 93 yards in the entire second half. Stepping up in a big way for the Indians defense was senior outside linebacker Ryley Styer, who finished with a team-high 14 tackles, one tackle for a loss and one forced fumble. Styer forced the fumble in the third quarter, and it was recovered by fellow outside linebacker sophomore Fisher Stevens.

Something that had a lot of success was when Jackson put in its starting left tackle senior Ashton Flinn at defensive tackle, which helped the Indians have a better push against Webb City’s stout offensive line.

Offensively, Jackson only had 44 passing yards in the first half, but Marchi was able to find his usual weapons in senior wide receiver Kannen Turley and junior wide receiver Isaiah Davis for the most part in the second half.

Marchi finished as the game’s top passer with 201 yards and one touchdown while not throwing an interception, which he only did four times this season. Turley hauled in the game’s lone touchdown catch as he also had 66 yards on seven receptions, while Davis paced him with 36 yards off five grabs.

Marchi spread the love throughout the game, though, as wide receivers like senior Logan Bruns and junior Case Fischer each had four grabs for a combined 54 yards. Sophomore tight end John-Paul Sauer had the second-most receiving yards behind Turley with 36 on just two catches.

The Indians were able to score 14-unanswered points in the second half as Marchi found a wide-open Turley in the endzone for a 6-yard touchdown with 4:51 left in the third quarter.

Jackson’s last score was produced by senior running back Joshua Wehrenberg, who was put into the game after the Indians starting running back junior Tony Williams left the game with an injury in the second half.

Williams didn’t have much success on the ground before he exited the game, though, as he only finished with 39 yards on 12 carries. As for Wehrenberg, he finished as the game’s second-leading rusher behind Wilson with 80 yards and one touchdown on his 15 attempts.

Wehrenberg scored his only touchdown of the game with 8:55 left in regulation to narrow the Cardinals lead to 35-21, but the Indians came up short twice in the redzone to finish the game without scoring once more.

“I thought our kids played with a lot more effort in the second half — they were a little more physical,” Jackson head coach Brent Eckley said. “In the first half, I don’t think they were very sharp. We missed a signal, jumped offsides and we just kind of let it slip away.”

Webb City (10-3) will go for its 16th state championship in school history against Holt (13-0) in the Class 5 state final this Friday night at Faurot Field in Columbia.