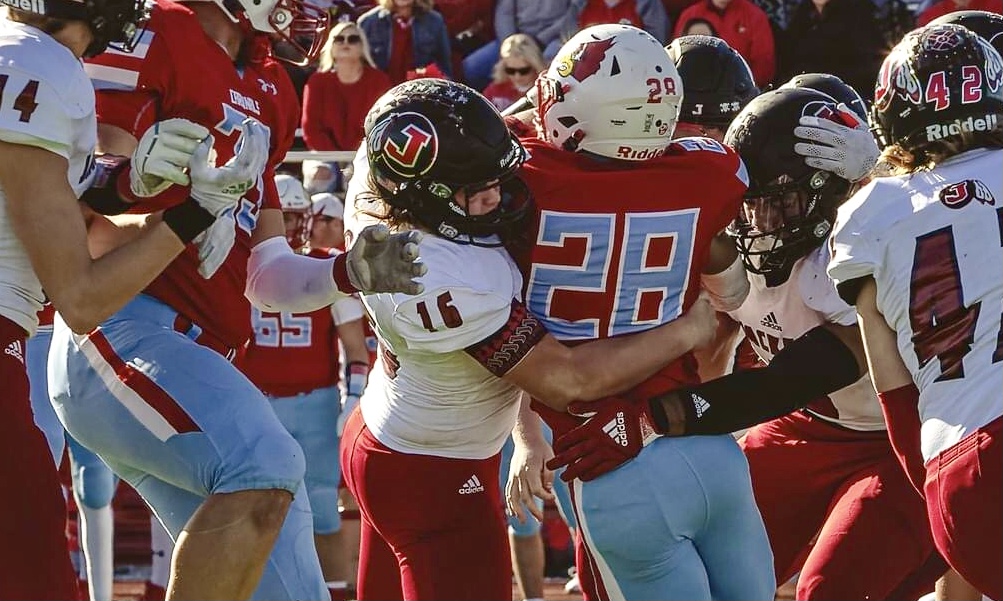 Jackson senior inside linebacker Garner Horman was an all-district and all-conference selection for the Indians last season. Photo by Darren DeLoach

Prior to opening its season this Friday night, the Jackson football team played in the annual jamboree held at Festus. The Indians faced host Festus as well as Class 5 District 1 opponent Seckman.

While the score isn’t kept during these glorified scrimmages, Jackson’s defense was stout by only giving up one touchdown in both matchups. Offensively, the Indians managed to find the endzone a few times despite having some errors and several self-induced penalties.

Indians head coach Brent Eckley thought that overall his team competed fairly well as the defense has been “ahead” of the offense throughout the summer and heading into this fall. Eckley did, however, think his offense made some big strides.

“There’s some certain bodies that we’re turning over from last year and the year before to where we’re still kind of feeling our way a little bit,” Eckley said. “We’re getting used to what guys can do and what guys can’t do. … I thought we got some good chunk plays offensively.

“We were just a little bit too messy on offense I felt like. There were missed signals, missed alignments and missed assignments. Just too many penalties, but we’ll look at everything and see what we have to do to get better at it.”

Along with having some offensive woes, there’s still an ongoing battle for the Indians starting quarterback position between senior Zach Calder and junior Adrian Fox. Both players helped lead Jackson to scoring drives as wide receivers senior Isaiah Davis and sophomore Kai Crowe each came up with touchdown receptions.

“I thought Zach was a little bit ahead of Adrian — Adrian had some adversity early, but he bounced back and did some good things,” Coach Eckley said. “Both of them threw good balls, and both of them threw bad balls. They also had issues with pressure that wasn’t on them, and we have to clean that up a little bit.”

Jackson has three first-year starters along the offensive line, as returning starters senior Clay Doza and Noah Gibson are at new positions (left tackle and left guard). Filling the other side of the line were senior Dalton Lohman and junior Zane Coon, while junior Aidan Shaver saw the most time at center.

“I’ve got a very-high standard for them, and they didn’t reach it tonight,” Coach Eckley said. “We had too many busts. I have confidence that they’re going to be a really, really good group. I thought we competed, but I didn’t think we competed well together. They’re going to get there, though.”

Indians three-year starting running back Tony Williams was not on the jamboree since he was at a wedding, which gave players like junior Jason Goodman and sophomores Zach Crump and Zach Zimmerman chances to shine at the position. Jason scored inside the 5-yard line against Festus.

“I feel like Griffin has been playing well enough that he could’ve played for us two years ago [when we won state],” Eckley said. “He’s playing at that pace and that speed. They all have to run to the ball or something could pop. They were fairly consistent with that.”