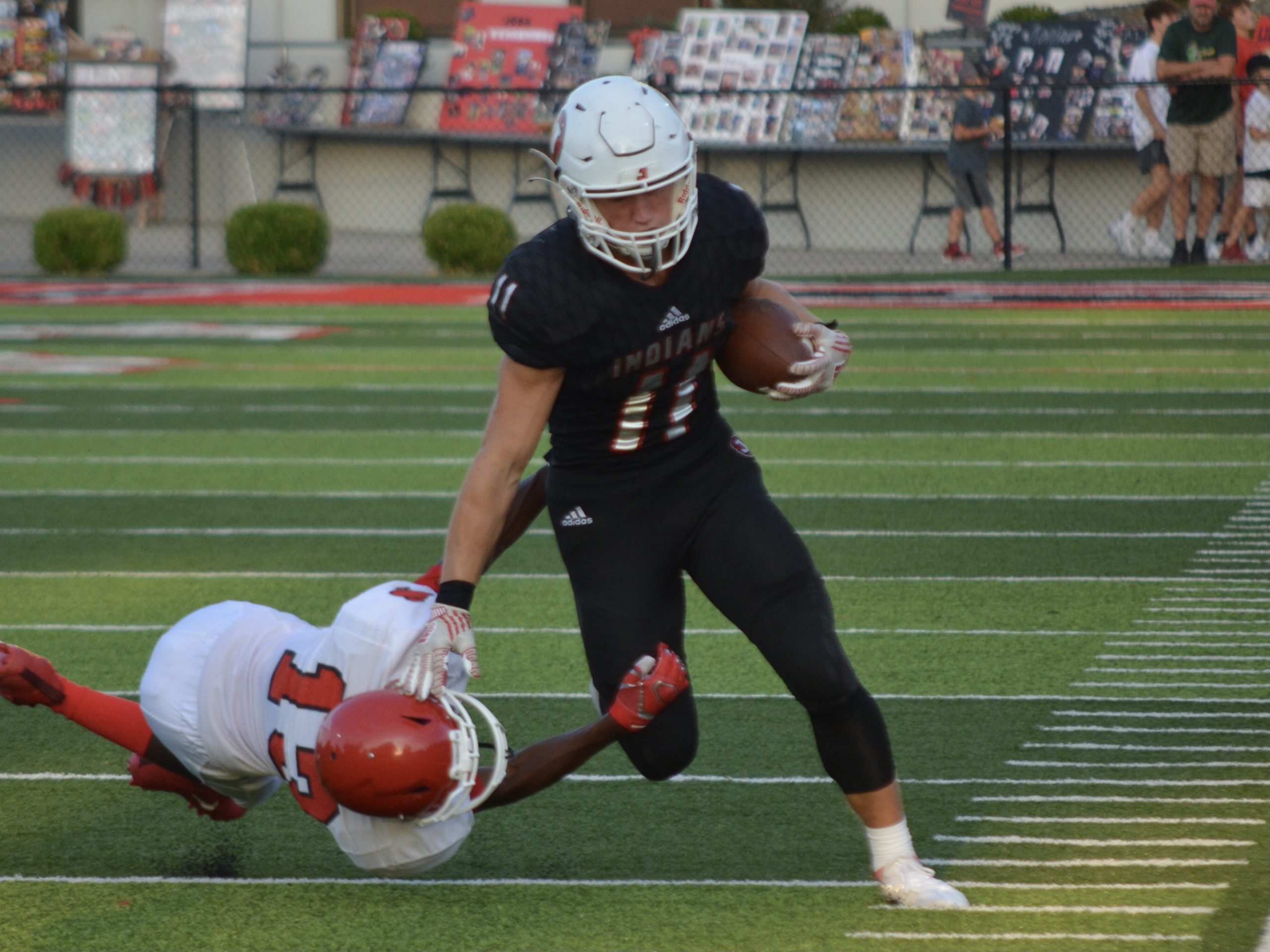 The last time Jackson football lost a regular-season game was back in 2017, which came against SEMO Conference and Class 5 District 1 rival Poplar Bluff on the road. The Indians traveled to Mules Stadium last Friday night for their annual regular-season contest versus Poplar Bluff, and it ended up being the closest game for Jackson since 2019 when it fell to Carthage, 27-21, in the Class 5 state title game.

The three-time reigning conference champions Jackson managed to come away victorious over the Mules by 18 points at 50-32 after outscoring them by 30 in the first half, 42-12. This deficit was too much for Poplar Bluff to overcome, but it still outscored the Indians 20-8 in the final two quarters.

“Our defense played well enough in spurts — forced some turnovers and had some really good drives, but they had two to three drives that weren’t good,” Jackson head coach Brent Eckley said. “We just weren’t consistent. Offensively we played enough to win and to be elite in the first half, but not in the second half.

One of the reasons why Jackson had a rough night defensively by giving up a total of 450 yards — 389 through the air — to Poplar Bluff was due to injuries. The Indians secondary was without their all-state senior safety Flint Guilliams, who suffered an injury Week 2, and one of their starting cornerbacks sophomore TJ Altenthal against the Mules.

The Indians were also without one of their top pass rushers junior defensive end Tony Terry for the entirety of the second half as he suffered an injury late in the second quarter against the Mules. Terry recorded six tackles, two stops for a loss, one pass deflection and one blocked extra-point attempt throughout the first half.

This allowed for Poplar Bluff’s senior quarterback Kannon Carr to throw for a game-high 389 yards with two touchdowns and one interception on 44 attempts (70.4 completion percentage). The Mules also had two receivers finish with triple-digit receiving yards as wide receivers senior Nic Brumitt and sophomore Darius Graham combined for 286 yards and one score on 21 catches.

Jackson’s saving grace defensively was its front seven as the unit only allowed the Mules to rush for a total of 61 yards as their leading rusher only accumulated 40 on 13 carries. Carr finished with 23 yards on seven attempts, but he did manage to score a game-high two rushing touchdowns.

“[Carr] has quick hands. With quick hands if you’re playing zone defense, it’s tough to drive on something — the ball is in the air and it’s gone,” Coach Eckley said. “He also did a nice job handling pressure. Their receivers did a good job running routes as well.”

The Indians were able to sack Carr three times as senior inside linebacker Jacob Farrow, senior defensive end Alex Lewis and sophomore outside linebacker Fisher Stevens each recorded one. Farrow and Stevens combined for 18 stops as Farrow led with 10, but it was fellow inside linebacker junior Griffin Horman who led Jackson in total stops as he came up with 15 along with two stops in the backfield.

Horman also made a pivotal play in the fourth quarter as he tackled Poplar Bluff punter senior Garrett Lazalier after nearly blocking the punt to give the Indians offense a short field to work with.

Before Poplar Bluff’s turnover on third-and-14 at its own 24-yard line when Jackson led 42-26, Carr got the ball off with pressure in his face to a wide-open Lazalier in the backfield, who had room to run for a first down. However, Lazalier dropped the ball to force fourth down.

Three plays after Horman’s big play on fourth down, Jackson senior quarterback Cameron Marchi scored an insurance touchdown for his team to take an eventual 50-26 lead with six minutes, 59 seconds left in the game. After scoring from three yards out, Marchi hooked up with none other than senior wide receiver Kannen Turley for a two-point conversion.

Even though Marchi finished second to Carr in passing yards with 286 through the air on 27 attempts (66.6 completion percentage) and also threw an interception, he recorded a game-high five touchdown throws as Turley hauled in three of them. Turley also finished with a game-high 192 receiving yards off of his seven catches.

Marchi continued to spread the love this week passing wise as he connected with junior wide receiver Isaiah Davis four times with two of those being touchdowns. Davis also had scored twice through the air in Jackson’s Week 2 contest.

The Indians outgained Poplar Bluff by only one yard offensively with a total of 451 as they had 165 on the ground with junior running back Tony Williams leading the attack with 90 on 16 carries, but he didn’t manage to score. Scoring Jackson’s lone touchdown on the ground was sophomore wide receiver Blayne Harris, who did so on a 20-yard jet sweep play in the second quarter.

The Indians also suffered an injury on the offensive end as sophomore running back Jason Goodman went down in the first half with a leg injury. Goodman entered the contest with two rushing touchdowns on the season.

Jackson will now host another conference and district rival in Cape Central (0-2) on Friday night, which the Indians beat 63-0 last fall.