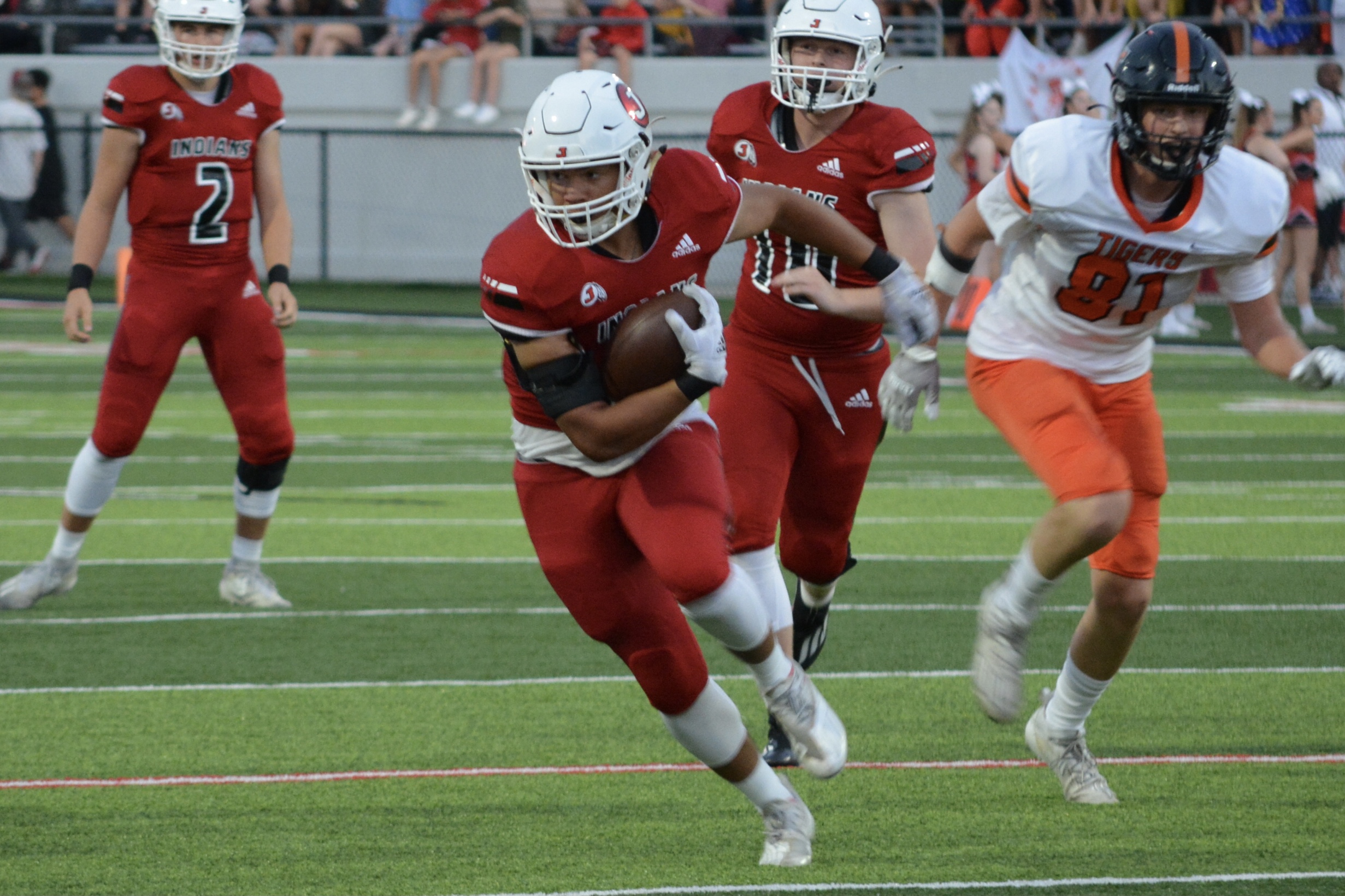 For the sixth-straight time, the Jackson football team proved to be superior in its annual crosstown rivalry game against Cape Central by shutting out the Tigers for a third-consecutive season.

The Indians coming away victorious shouldn’t have been a surprise to anyone as Cape was coming off a 42-0 loss to Class 4 Hillsboro on Sept. 10, which is a team Jackson defeated by the same score back in Week 2.

The Tigers (0-3) went scoreless for the second week in a row as the Indians (4-0, 2-0 SEMO Conference) produced 48 points and have now outscored Cape 146-0 over the last three meetings. This was Jackson’s second shutout of the young season — already matching last year’s regular-season mark.

There was only one turnover in the game as it was sophomore cornerback TJ Althenthal intercepting a pass thrown by the Tigers usual backup quarterback sophomore Adrian Fox. However, Fox received the start as Cape’s junior and second-year starting quarterback Morgan Diamond was out for undisclosed reasons.

The Tigers were also without their starting running back senior Tyray Jackson, who didn’t play in the game for undisclosed reasons as well. Cape only amassed 50 yards of total offense on 42 plays as Fox finished seven-of-15 throwing the ball for 40 yards and lost 15 yards rushing it on nine carries.

Leading the running game for the Tigers was freshman Zai’Aire Thomas, who produced 40 yards on 12 attempts for an average of 3.3 yards per carry. Thomas was the only player for Cape to gain more than one yard on the ground, but he left the game in the second half after suffering an injury.

“We knew that Cape was shorthanded and young anyway — I feel kind of disappointed for them because it was a rough day for them,” Jackson head coach Brent Eckley said. “They were missing some guys they were counting on who didn’t get a chance to play, but we’ve got to take care of our team.

“Whoever is on the field has to play hard, and I thought their kids played hard. It was very admirable the way they played, and their coaches did a great job calling stuff as well as gaining confidence and playing competitively.”

As for Jackson, the Indians scored six of their seven touchdowns on offense with the seventh being on special teams as senior all-state safety Flint Guilliams returned a punt for 67 yards and the score in the second quarter. He was one of the Indians six defenders to finish with at least five tackles as two of them were for losses.

“[Guilliams] did a good job catching that punt, and he’s got really great vision when catching it and being able to slither through and hits it,” Coach Eckley said. “When you look at him, he’s really long and you think that’s not very fast turnover, but he gets a lot of mileage out of those strides and will take off on you. Right now he’s not getting caught.”

Offensively, Jackson ran the ball 81.6% of the time as Indians junior running back Tony Williams produced a game-high three rushing touchdowns on 12 carries and finished with 89 yards.

Williams wasn’t Jackson’s leading rusher, though, as senior Joshua Wehrenberg carried the ball five times for 99 yards and one touchdown run. His touchdown came when he broke off a 50-yard run near the beginning of the second quarter to give the Indians a 21-0 lead.

Having double-digit carries along with Williams was freshman running back Zach Zimmerman as he totaled 39 yards on 11 attempts while scoring the final touchdown of the game with six minutes, 15 seconds to go in the fourth.

“Tony Williams carried the ball well, and I thought Zach gave us some good snaps,” Coach Eckley said. “It shows that we weren’t throwing it a whole lot, so he had a chance to carry it. We had eight different kids that carried the ball, which is good because there aren’t many other ones we could’ve had in the mix.”

Even though Jackson’s first-year starting quarterback senior Cameron Marchi only threw the ball in his first and lone career start against rival Cape Central, he still managed to have a touchdown pass. Marchi’s throw for six came on the Indians final drive in the first half as he connected with senior wide receiver Kannen Turley for a 36-yard score with 50 seconds left till halftime.

Marchi was one of the eight Indians to run the ball as he finished with the third-most yards on the ground at 45 off of five carries. Jackson backup quarterback junior Zach Calder finished fifth in rushing with 20 yards on three attempts.

Jackson senior wide receiver Logan Bruns actually hauled in the most receptions for the Indians with two along with 18 yards, but the all-state kicker continued to prove why he has one of the top legs in the Show-Me State. He finished six-for-six on extra-point attempts while also recording touchbacks on kickoff he attempted.