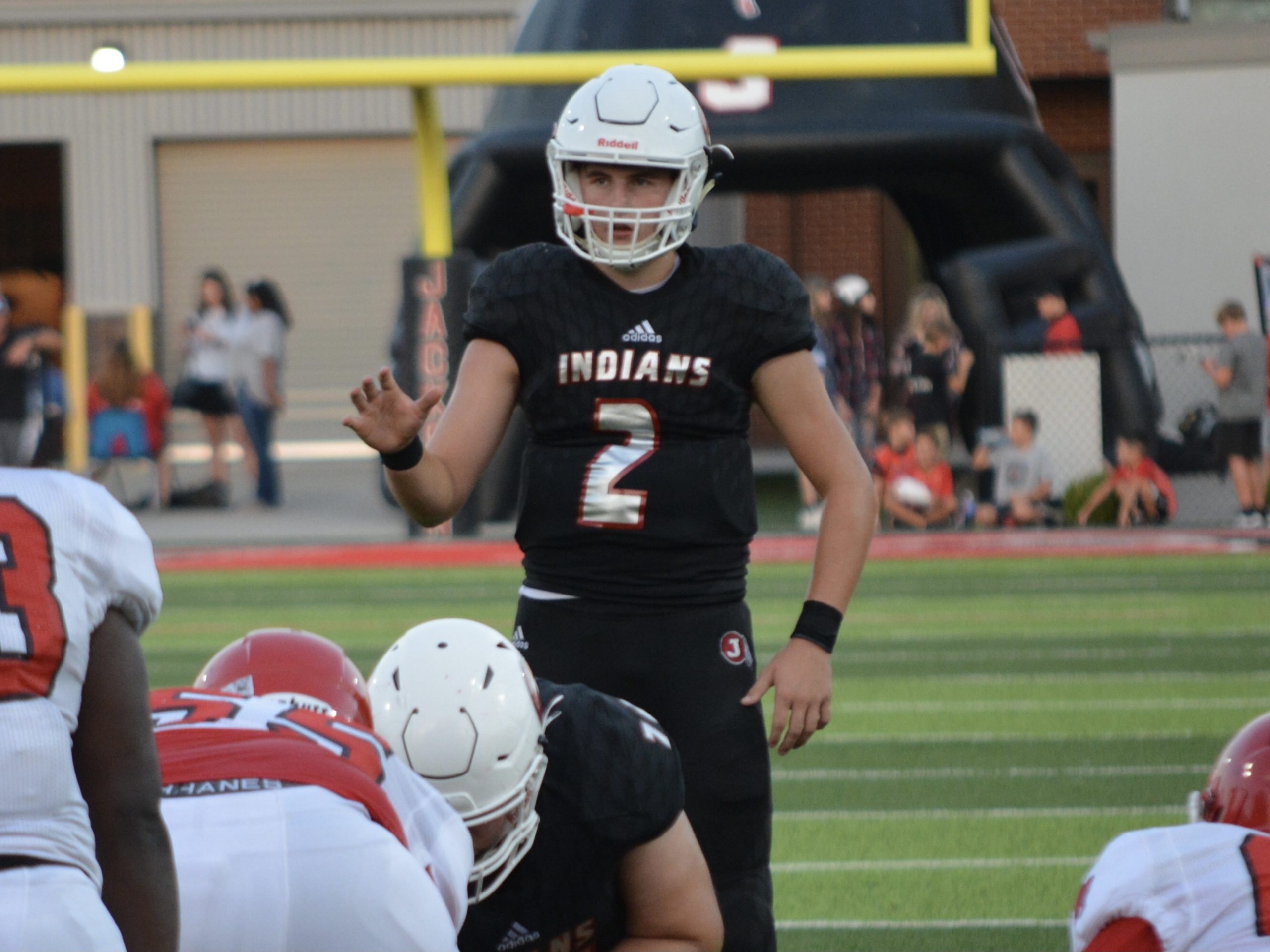 Senior quarterback Cameron Marchi accounted for five of Jackson's six touchdowns in a 42-0 win over Hillsboro last Friday night on the road. Photo by Jay Forness

In its first road game of 2021, the reigning Class 5 State Champion Jackson Indians didn’t disappoint as they recorded their first shutout of the season by defeating Class 4 Hillsboro 42-0 Friday night. With the final score being as one sided as it was, one would think it wasn’t that hard fought of a victory for Jackson. That simply wasn’t the case.

In the second quarter, the Indians offense was nearly held scoreless and turned the ball over on back-to-back drives after taking a 21-0 lead through the first 12 minutes. It wasn’t until there were eight seconds left in the first half when Jackson was able to score its fourth touchdown of the game.

What a sequence of plays it was for the Indians to extend their lead, though, as senior first-year starting quarterback Cameron Marchi marched his team down the field 53 yards on just two plays for six points.

Both plays were through the air as Jackson’s offense only had 23 seconds to work with, but it did have a shorter field thanks to a blocked punt by junior defensive end Tony Terry. Had Terry not blocked Hillsboro junior Austin Romaine’s punt from the Hawks own 47-yard line, the ball would’ve been much further into Indians territory as Romaine averaged 22.9 per attempt in the game.

The very first play following Terry’s key play on special teams, Marchi hooked up with junior wide receiver Isaiah Davis for a 26-yard gain. Jackson’s offense rushed to the line of scrimmage and was able to get its second and final play off quickly for Marchi to find senior wide receiver Kannen Turley in the corner of the endzone for a 27-yard touchdown.

“Our guys did a really nice job there,” Jackson head coach Brent Eckley said. “Really we just called the same play back-to-back but just flipped the formation. [Hillsboro] chose not to blitz, they chose to play the infamous prevent defense. They had some success blitzing but just chose not to take chances there, which is probably pretty smart. In the end, our receivers were able to get on top.”

Like previously stated, the two-play, 15-second scoring drive came after the Indians turned the ball over two drives in a row. The first was an interception made by Hillsboro senior Cody Bishop, who picked off Marchi after his pass intended for Davis was tipped and fell into Bishop’s hands.

Davis nearly turned the ball over on the ensuing drive when he was tackled for a loss on a jet sweep. Fortunately, Jackson recovered the ball, but the Indians failed to convert on fourth-and-5 in Hillsboro territory later in the drive as Marchi was tackled two yards behind the first-down marker on an option keeper.

Even though Jackson made these two turnovers, its defense prevailed and forced Hillsboro to punt on those possessions. The Hawks also shot themselves in the foot throughout the game as they were called for 12 penalties, which resulted in a total of 120 yards lost.

Despite that, Hillsboro gained 227 yards of offense against a Jackson defense that forced Roosevelt to finish with negative 34 yards in the season opener. Gaining a majority of the yards for the Hawks was junior running back Jaxin Patterson, who netted 145 on the ground with 30 carries (4.8 yards per attempt).

Keeping these backs to moderate or short gains were defenders like Terry, senior safety Flint Guilliams and senior outside linebacker Ryley Styer. Guilliams made numerous open-field tackles while also bringing down Patterson for a loss on several occasions.

Also coming up big defensively for the Indians was senior inside linebacker Jacob Farrow, who intercepted a pass from Hillsboro junior quarterback Griffin Ray in the first quarter. This led to a 10-yard touchdown run by Marchi two plays later.

Out of 59 offensive plays, the Hawks only had Ray throw the ball a total of 12 times as he completed three of them for 38 yards. Ray overthrew receivers multiple times whenever he attempted to throw the ball far down the field.

On the opposite side through the air, Marchi finished with a career-high 270 passing yards and four touchdowns while completing 14 of his 18 attempts for a completion percentage of 77.8%. Hauling in a majority of Marchi’s throws was none other than Turley, who recorded a game-high 158 receiving yards and two touchdown catches on eight grabs.

The first-year starter opposite of Turley at the slot receiver position, Davis, finished second behind him in receiving with 84 yards and had two touchdowns of his own on just four catches (21 yards per catch). Davis even finished with the lengthiest scoring play of the contest with a 28-yard touchdown grab in the third quarter.

As for Jackson’s running game, the Indians accumulated 98 yards on the ground as junior running back Tony Williams led the way with 49 yards on 11 carries with a 1-yard touchdown. Last week, Williams only needed three attempts to gain 95 yards individually and score two touchdowns.

Next up for the Indians (2-0) is another road contest but against SEMO Conference and Class 5 District 1 foe Poplar Bluff (2-0).