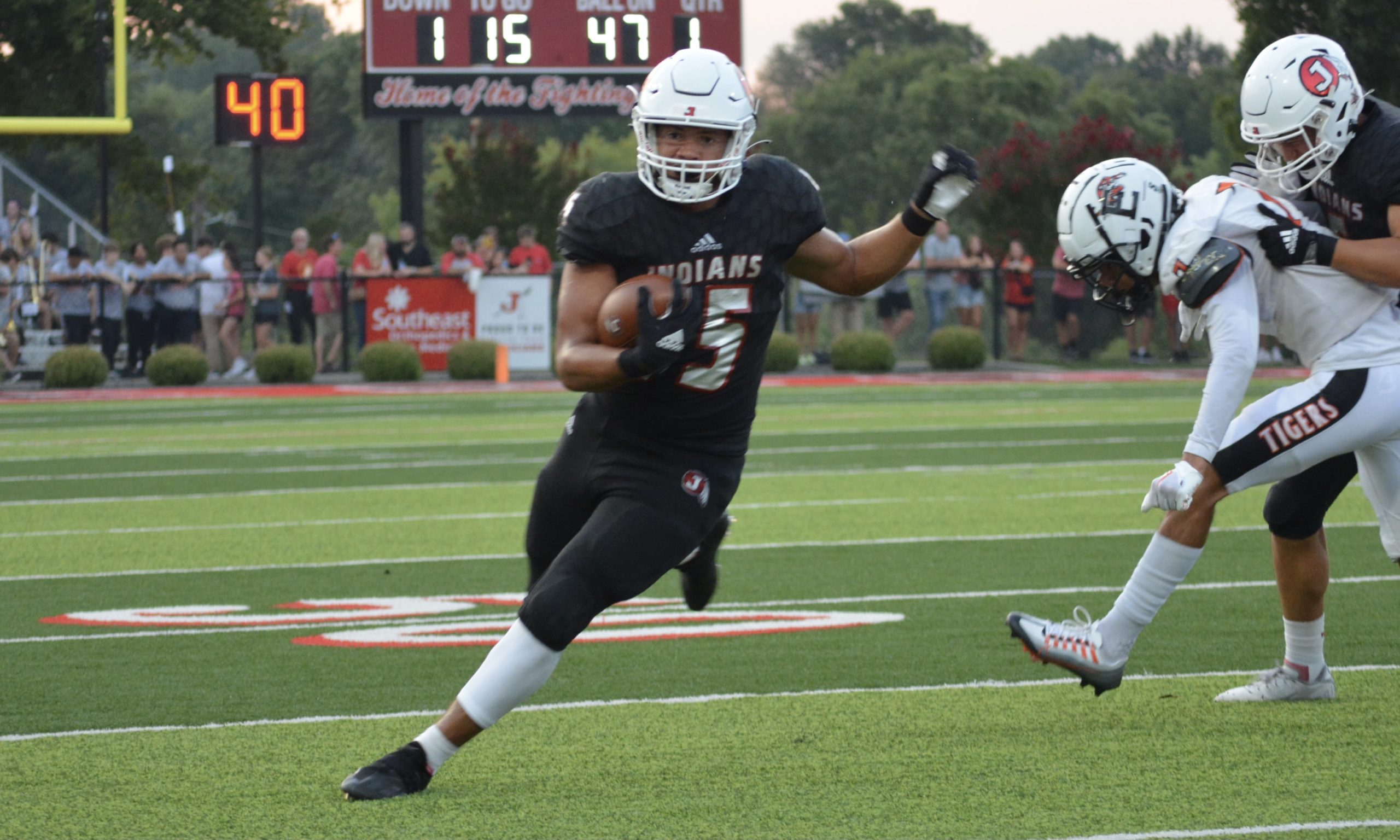 Jackson senior running back Tony Williams rushed for a game-high 169 yards and four touchdowns in the Indians 35-7 win over Poplar Bluff last Friday night at The Pit. Photo by Jay Forness

For the second consecutive Friday night in a row at The Pit, the Jackson football team was able to record a blowout win over a SEMO North Conference opponent.

Williams nearly accounted for 45% of the Indians touches on offense as he carried the ball 34 times throughout the night. On Jackson’s second scoring drive against the Mules, Williams ran the ball seven times and then five times of the Indians fourth score in the fourth quarter.

Thankfully in the third quarter, Jackson’s defense was able to give Williams and the offense a shorter field to work with as junior outside linebacker Fisher Stevens came up with a 36-yard fumble recovery.

Stevens’ heads up defensive play — following a forced fumble by senior defensive end Tony Terry Jr. — allowed Williams to only have to pick up nine yards on three plays for a touchdown. This was Jackson’s first score of the game to take a 7-0 lead over Poplar Bluff to start the second quarter.

Another key play made by a Jackson defender allowed for Williams to have short yardage once more as junior cornerback TJ Altenthal recorded a 52-yard punt return in the third quarter. Altenthal reached the 10-yard line before being taken down as Williams scored two plays later for Jackson to take a 21-0 lead with 16.6 seconds left until the fourth.

Tony Williams rushed the ball five more times on his last scoring drive of the night, but junior quarterback Adrian Fox was able to relieve him with some big runs of his own. Fox finished the game pacing Williams in rushing with 110 yards on 12 carries while only playing in the fourth quarter.

Fox only had one pass attempt as well, but he was able to find junior tight end John-Paul Sauer for a 7-yard touchdown, which was Jackson’s lone score though the air against the Mules.

Starting the game at quarterback as he has each contest this season was senior Zach Calder, who failed to complete 40% of his passes (39.1%) for 73 yards on 23 attempts. Calder carried the ball three times and gained one yard in the process.

Scoring Poplar Bluff’s lone touchdown of the night was senior Calvin Anderson, who did so with a 78-yard kick return in the fourth quarter. This means Jackson’s defense was technically able to record its first shutout of an opposing offense this season.

Before being knocked out of the game with an injury after being hit by Terry Jr., Mules junior quarterback Mason West attempted 17 passes but only completed six of those throws for 26 yards.

Poplar Bluff primarily had success on the ground as senior running back Makel McFarland finished as his team’s leading rusher with 102 yards on 16 carries. Mules backup quarterback sophomore Jay Edmundson paced him with 34 yards off his eight rushing attempts.

One of the reasons why Poplar Bluff wasn’t able to have success throwing the ball was due to Jackson’s defense recording 11 pass deflections. Four Indians had multiple pass breakups Atlenthal, Terry Jr., junior safety Gavin Guilliams and senior cornerback Cole Vermillion each had two.

Leading Jackson in overall tackles for the first time this season was junior outside linebacker Titus Jackson with nine, while Horman paced him at eight stops. Stevens and Klund finished tied for the third-most tackles with seven apiece.

Much like the Mules, Cape Central is also a Class 5 District 1 matchup for the Indians, which are currently ranked second in the district standings. Jackson is only 2.09 points behind Oakville (3-1) in the standings.

The Oakville Tigers have yet to record a win over a team with an above .500 record as they lost to Ladue Horton Watkins (2-2) 34-31 this past Friday night.