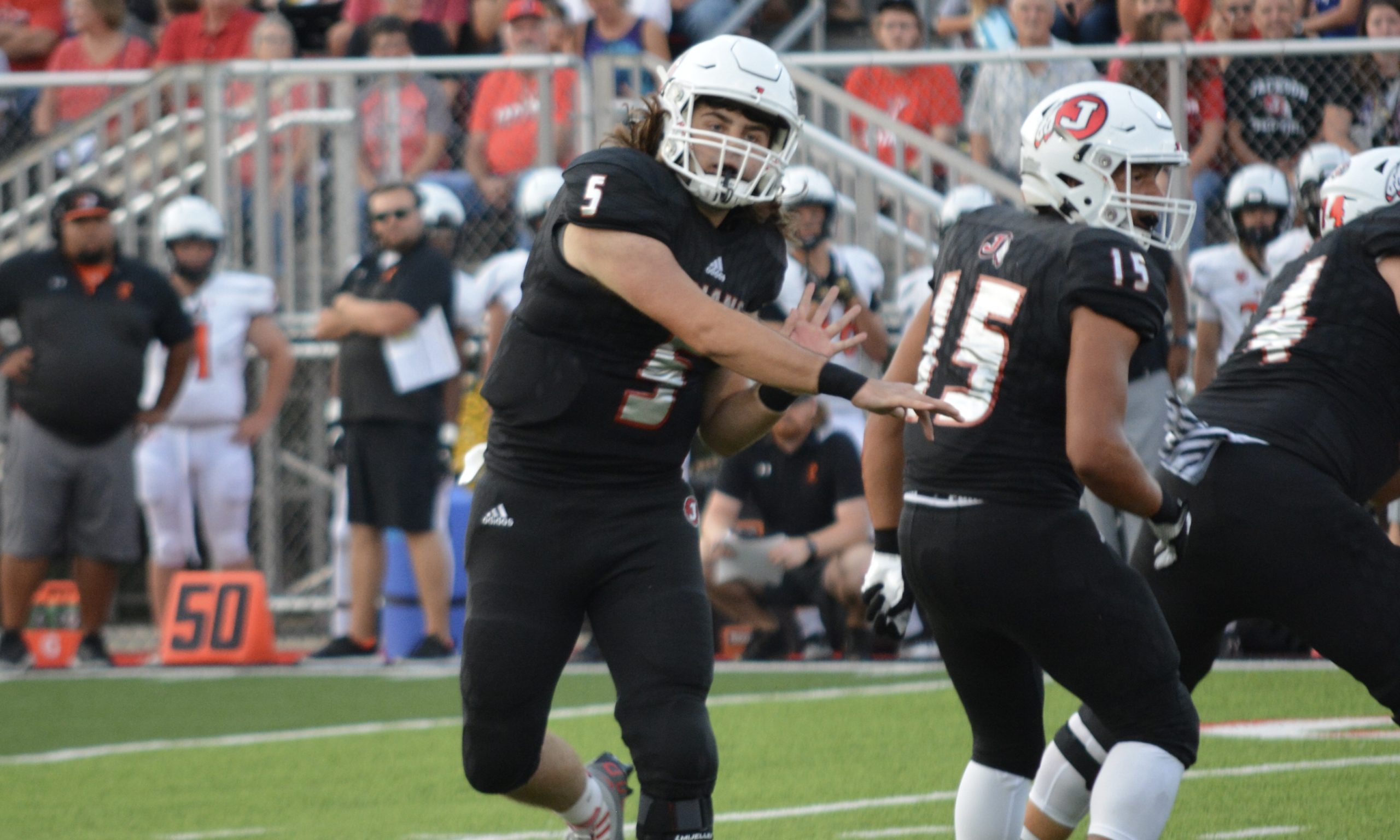 The last time Jackson football lost back-to-back games to start a season was all the way in 2015 when the Indians finished 5-5 overall and lost in the opening round of the Class 5 District 1 Playoffs.

Jackson ended up losing its first three games that season, but this year’s Indians put their losing streak to a halt at two after blowing out SEMO North Conference opponent Farmington 47-7 last Friday night at home.

The Indians bouncing back with a 40-point win over the Knights bodes well for a team that hopes to not only win a fifth consecutive conference championship but also a fifth-straight district title.

Offensively, Jackson was led by senior quarterback Zach Calder as he connected with two different receivers for a game-high three touchdown passes. Calder did so on only 10 attempts (80% completion rate) for a total of 144 yards.

Calder’s longest touchdown pass of the night came at the beginning of the second quarter when he connected with sophomore wide receiver Kai Crowe for a 37-yard touchdown. The first touchdown of the game also happened to be Calder to Crowe on what was a 26-yard scoring play with 10 minutes, 51 seconds left in the first quarter of action.

Jackson took a 14-0 lead a little over three minutes after that touchdown as Calder hooked up with senior wide receiver Isaiah Davis for a 25-yard touchdown. The Indians took a three-score lead five minutes later when junior quarterback Adrian Fox took over as he connected with Davis for a 7-yard score.

Crowe finished with an average of 25 yards per catch as he hauled in a total of 100 yards off four catches on top of his two touchdown receptions. Davis paced him with 98 yards on three more catches (14 yards per reception) along with his two receiving touchdowns.

Against Francis Howell, the Indians lone two scores came in the first half as Calder threw touchdown passes to — you guessed it — Davis and Crowe for scoring plays of 38 and 28 yards, respectively.

On the ground, Jackson split carries as starting running back senior Tony Williams only had five carries, but he still managed to find the endzone twice for a total of 49 yards. Williams had the longest scoring play of the game when he broke off a 40-yard run at the 8:18 mark in the second quarter.

Tony scored the Indians final touchdown of the contest with a 3-yard carry three minutes before the end of the first half. This gave Jackson a 47-0 lead as fellow running back sophomore Zach Crump scored a 14-yard touchdown run between Williams’ two scores.

In all, Jackson finished with 413 yards of total offense while committing zero turnovers. The Indians did have eight penalties, though, which suffered in a loss of 75 yards from scrimmage. In comparison, the Knights (1-2, 0-1) only had four penalties, but they only finished with 148 yards of offense.

Farmington scored its lone touchdown in the fourth quarter on a 2-yard run as the Indians defense forced a total of eight three-and-outs. The starting defense for Jackson shut out the Knights, of course, as senior inside linebacker Griffin Horman led the Indians with nine tackles.

Jackson senior defensive end Tony Terry Jr. finished with eight stops of his own as two of them were tackles for a loss. Fellow defensive lineman junior Cole Foltz had seven tackles, one tackle for a loss and forced a fumble.

Starting junior outside linebackers Titus Jackson and Fisher Stevens each recovered a fumble, while combing for 10 tackles with six and four, respectively. Jackson also had a stop for a loss. Indians junior linebacker Hayden Wessell tied for Foltz in third for tackles with seven while also having a stop in the backfield.

This game against the Mules will also be homecoming for the Indians as they will then travel to crosstown rival Cape Central Week 5. The Tigers two wins have come against winless teams as the team they beat 54-12 in Week 1 — St. Charles — is 0-3 much like Poplar Bluff.

Cape’s one loss of the young season came at the hands of Hillsboro (3-0) as the Hawks won handedly at 47-7. Class 4 Hillsboro has outscored its three opponents by a combined total of 145-34, which includes a 49-14 win over Jackson’s Week 6 opponent Sikeston (1-2).