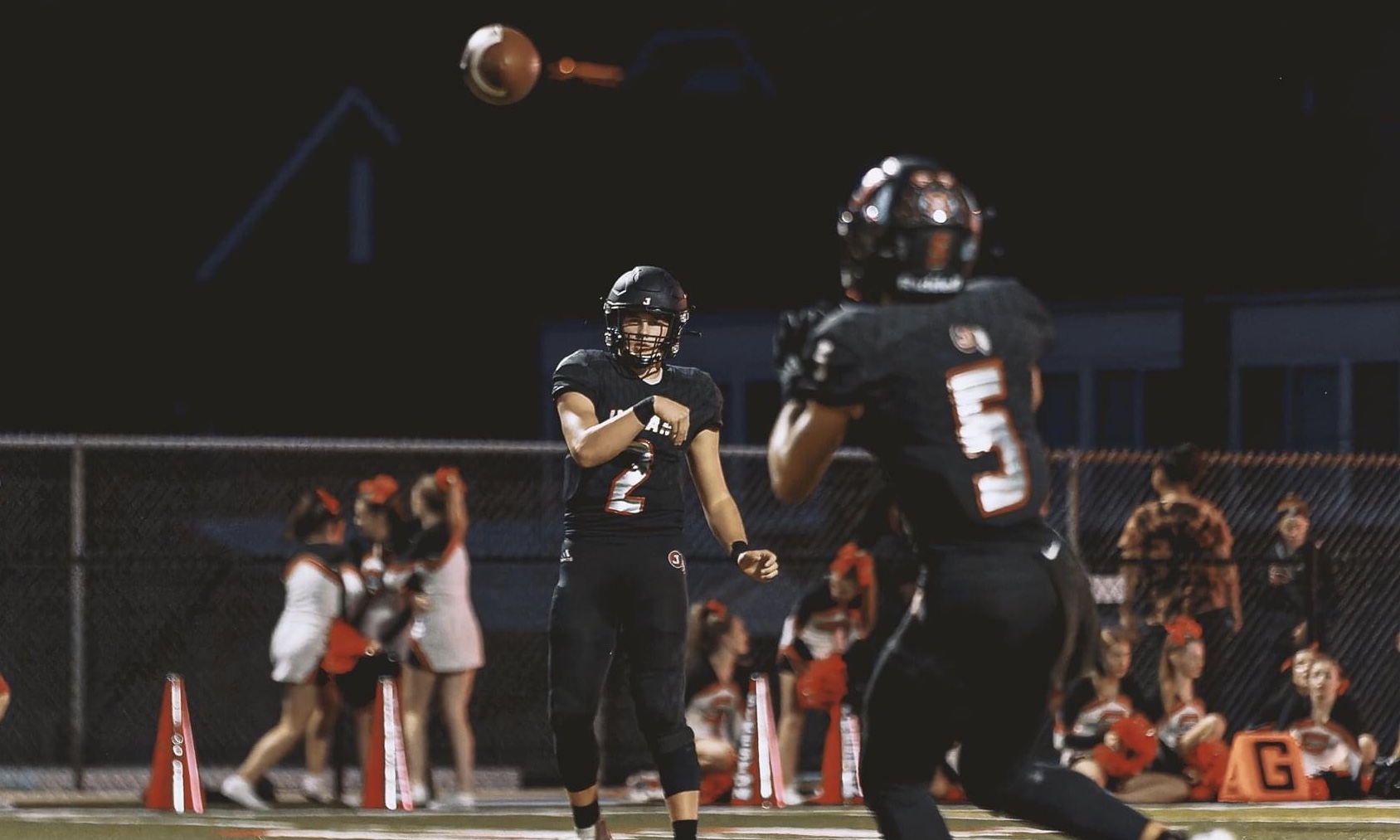 Senior quarterback Cameron Marchi completed 243 of his career-high 515 passing yards and three of his six touchdown throws to junior wide receiver Isaiah Davis in Jackson’s 49-14 win over Rockwood Summit in the Class 5 Quarterfinals on Friday at The Pit. Photo by Darren DeLoach

Following the first four minutes of Friday’s Class 5 Quarterfinal at The Pit, something had happened that the Jackson football team had yet to face all year long — being down by two scores.

The Indians trailed then undefeated Rockwood Summit 14-0 after only six offensive plays for the Falcons as senior quarterback Mason Brown connected with senior wide receiver Drew Krobath on passing plays of 77 and 16 yards, respectively, for touchdowns.

Rockwood Summit only needed three plays on each of its first two drives to score as the Falcons gained possession right after their first score by forcing Jackson senior Flint Guilliams to fumble on his first kick return attempt of the night.

However, Jackson did what it’s done in a majority of its games all season by finishing with at least a five-score lead. The Indians did so by rallying off seven-unanswered touchdowns to beat Rockwood Summit 49-14 and make their third-consecutive appearance in the state semifinals.

“I’m really proud of the kids — really proud of them. It’s not easy,” Jackson head coach Brent Eckley said. “Everbody’s looking at this group and seeing how they compare to last year’s group. It’s so, so special. … I don’t know for sure how [we bounced back from that], and our kids were I’m not going to say unfazed, but it was calm on the sidelines.”

It took Jackson’s offense 12 plays to answer the Falcons second and final score of the game in the first quarter as junior running back Tony Williams found paydirt on a 1-yard run with five minutes, 35 seconds left until the second quarter.

Jackson’s defense then forced Rockwood Summit to punt on its third drive of the game, which allowed the Indians to tie the game four plays later as senior quarterback Cameron Marchi hooked up with junior wide receiver Isaiah Davis for a 46-yard touchdown.

The Falcons attempted a 41-yard field goal on their next drive, but they failed as the ball sailed wide left, which allowed Marchi to toss another touchdown strike. Marchi connected with senior wide receiver Kannen Turley for a 70-yard score to give Jackson a 21-14 lead with 3:49 left till halftime.

The Indians were able to score once more in the first half after Jackson’s defense forced another three-and-out as it only took Marchi one play to find Turley for a 88-yard touchdown before entering the locker room.

“We added two or three wrinkles that we put in this week that they didn’t have the opportunity to prepare for,” Coach Eckley said. “Our guys just executed really well and it starts with protection.”

Jackson’s defense made even more plays in the second half as Guilliams and fellow senior defensive back Black Blackman both had interceptions in the third quarter. Blackman’s pick led to the Indians first score of the second half as Marchi found Davis for 31 yards and the touchdown with six minutes left in the third.

Blackman and Guilliams combined for 15 tackles as Blake came away with 10, while Jackson junior defensive end Tony Terry recorded a game-high 14 tackles while also having three stops behind the line of scrimmage. Fellow defenders junior inside linebacker Griffin Horman and senior defensive end Mark Brakhane also had double-digit tackles with 12 and 11, respectively.

The Falcons were only able to gain 89 yards on the ground on 30 rushes because of Jackson’s stout defensive effort. Brown finished with 228 yards on top of his two touchdown throws, but he only completed 50% of his passes compared to Marchi’s 68% completion rate.

On top of Marchi’s better completion percentage, he threw for a career-high 515 yards and tied his career-high passing touchdowns with six. Davis finished as the game’s leading receiver as he had a career game as well with 243 yards and yet another hat trick on six grabs, while Turley paced him with 214 yards and two scores.

On the ground, Rockwood Summit senior Dareonte Turman had a game-high 83 yards on 25 attempts with no score. Williams led the Indians in rushing with 34 yards on 10 carries, and he did exit the game with an injury before halftime but returned in the second half.

If the Indians beat Webb City, this will be the first time in school history the program has made it to three-straight state championship games.