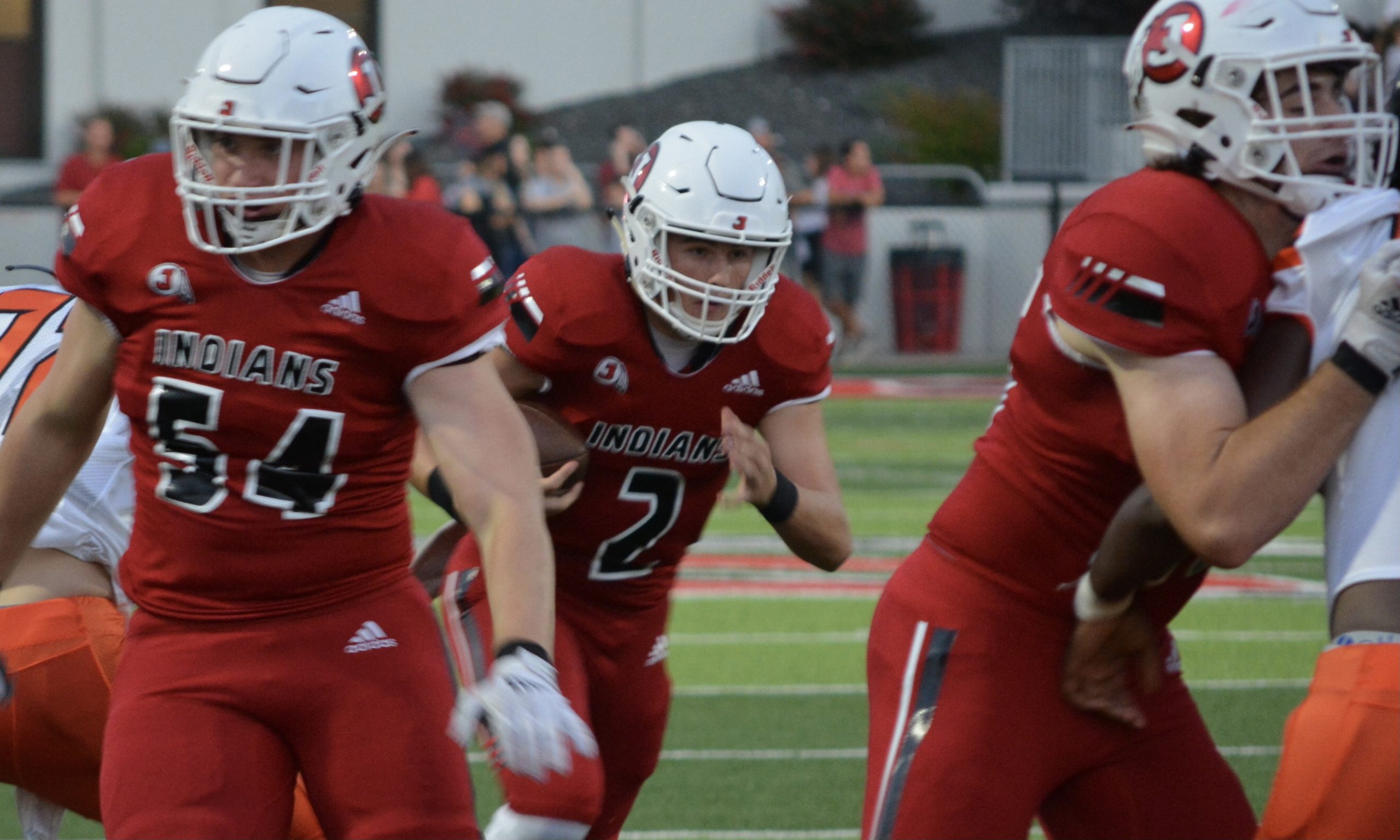 For the first time in school history last Friday night, the Jackson football team was able to win the SEMO North Conference Championship for the fourth year in a row. The Indians did so by recording their third shutout of the season with a 55-0 victory over Class 4 Farmington on the Knights home turf at Haile Memorial Stadium.

“I’m really proud of our seniors. They’ve done something that nobody else has [win a conference title every year in high school], so that’s special,” Jackson head coach Brent Eckley said. “That was one of their major goals for the year that we set.

“We have a certain order of goals that we talk about — winning the conference is one of them. It’s good to achieve that because we can mark it off the list, move on and look for bigger and better things.”

It was business as usual for a Jackson offense that has scored 50 or more points in four of seven games thus far while averaging a total of 52.4 points per game. Yardage and scoring wise, the Indians couldn’t have been more balanced as they gained 243 yards and scored four times on the ground, while having 234 yards and four touchdowns through the air.

Continuing to run the show for Jackson’s offense was none other than senior quarterback Cameron Marchi, who completed 75% of his 16 passing attempts and went a fourth-straight week without throwing an interception on top of his 234 yards and four touchdown throws.

Being on the receiving end for three of Marchi’s four touchdown passes was junior wide receiver Isaiah Davis as he finished with six catches and 88 receiving yards. This was the third game in a row Davis had scored multiple times as he’s now had eight touchdowns in the last three weeks.

Catching Marchi’s other touchdown throw was, of course, senior wide receiver Kannen Turley as he recorded the longest scoring play of the night with a 78-yard reception in the first two minutes of the second quarter. Because of this chunk play, Turley finished with a game-high 137 receiving yards on just five catches (27.4 yards per catch), but his only competition was Davis since Farmington only passed the ball twice.

“It’s nice that [Davis] is getting some attention there and maybe [Kannen Turley] is not getting as much because we know Kannen is explosive, too,” Coach Eckley said. “It’s a good one-two punch, and it’s good that they’ll both go up and get the ball and block for each other.

“They might be the best tandem that we’ve had here as I’m thinking back, and we’ve had some good ones. We had Terrico Johnson and Jordan Kent, Jordan and Quentin Kent, so I think [Davis and Turley] are right up there.”

Despite running seven less plays on offense, Farmington still won the time of possession battle by nearly five minutes since the Knights ran the ball and the clock 35 times.

Finishing as Farmington’s leading rusher was its quarterback Drew Felker as he recorded 40 yards on 12 carries, while Braydon Berry broke off a 39-yard run on his only carry. Knights fullback Kaeson McClain had the second-most rushing attempts for Farmington with seven, but he was only able to net 15 yards on the ground.

“I didn’t know if it would be a close game or not. I feel pretty good about where we’re at on offense, but I was really pleased with how our defense played,” Coach Eckley said. “I thought we played really disciplined, and if you get up on a team in this offense, it’s tough for them to catch up. I didn’t expect it to be like this. I was pleasantly surprised with a lot of different areas for us.”

This allowed for Jackson’s defense to wrack up the tackles statistically as seven Indians finished with at least five tackles. Recording the most was junior defensive end Tony Terry as he came up with 11 stops along with his game-high two sacks and blocked punt.

Moving back to the Indians offense, it was also an easy night running the ball as Jackson averaged 8.7 yards per carry behind an offensive line led by senior left tackle Ashton Flinn, who is verbally committed to Murray State. Another senior on the offensive line picked up a college offer last week from Westminster in right guard Liam Bryant.

Finishing as Jackson’s leading rusher was junior running back Tony Williams as he only needed six carries to do so. Williams finished with 77 yards and scored the game’s first two touchdowns as running mate and senior Joshua Wehrenberg paced Tony with 70 yards and a touchdown on five attempts.

The Indians third-string running back found the endzone as well as freshman Zach Zimmerman scored from two yards out with under five minutes left in regulation. Williams scored his first touchdown on a 35-yard run, while Wehrenberg had the longest scoring run of the night on a 46-yard gain in the second quarter.