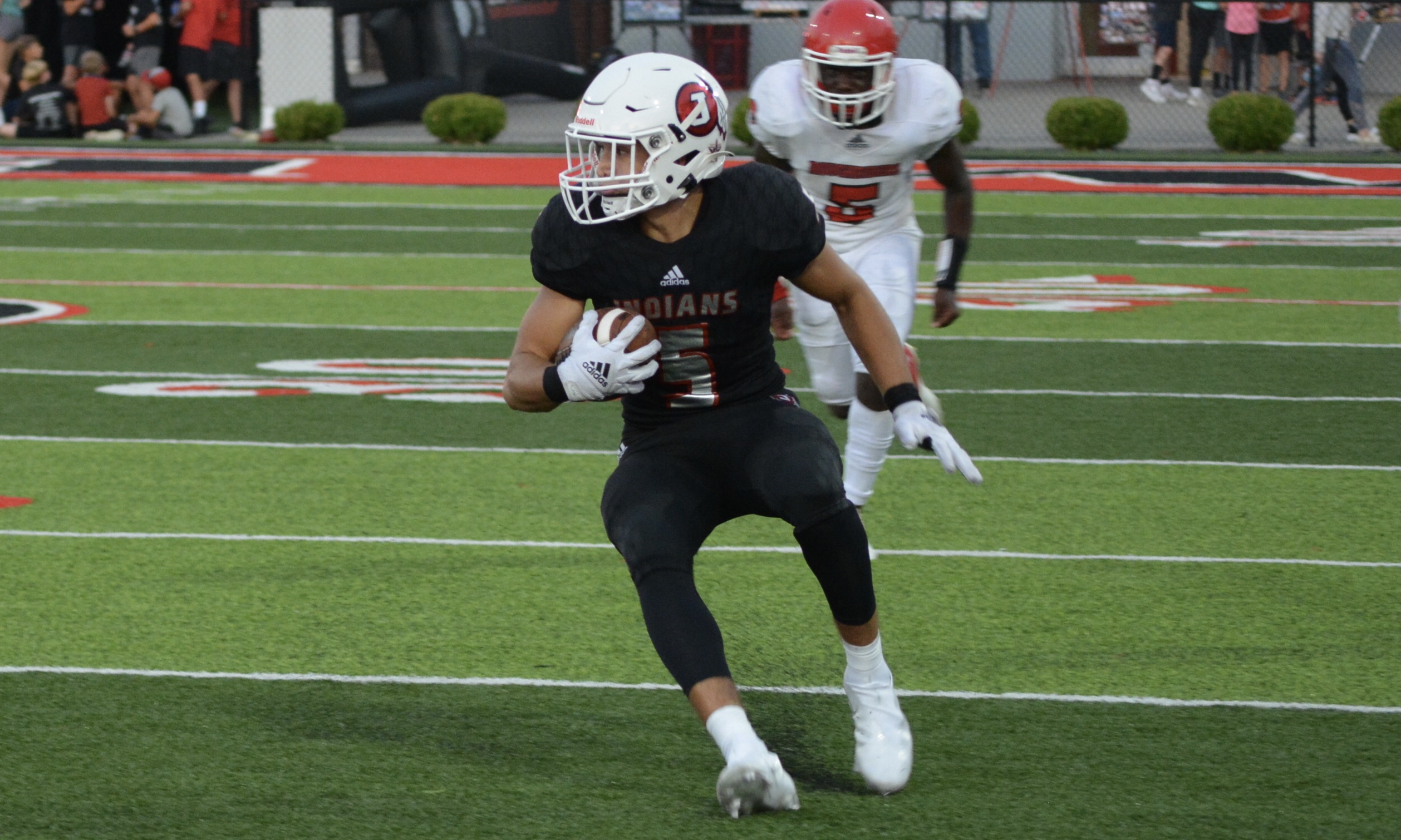 It was Jackson football head coach Brent Eckley’s first year at the helm (2012) when the Indians last fell to SEMO Conference opponent Sikeston. Last Friday night, Jackson turned its streak of wins over the Bulldogs into nine by a score of 50-7 on Homecoming at The Pit.

Not only have the Indians now been able to beat Sikeston for the past nine seasons, but it has always been a one-sided affair as Jackson has outscored the Bulldogs by a combined total of 459-36 since 2013.

However, Sikeston was able to make it a one-score game late in the first quarter when junior quarterback Joseph Heckemeyer threw a perfect pass to senior wide receiver Jonathan Green for a 71-yard touchdown.

This narrowed Jackson’s lead to 14-7 with three minutes, 56 seconds left in the first quarter. Scoring the first two touchdowns of the game on back-to-back, 3-yard runs was Indians junior running back Tony Williams, who finished with a game-high 145 rushing yards and three touchdowns on 13 carries.

“I was pleased with the way [Williams] started. I thought he ran hard and physical, was patient and then got down hill,” Coach Eckley said. “In the second half, I thought he spent a little too much time trying to sort things out. I didn’t think he was quite as quick as what he needed to be.”

It only took one play on Jackson’s ensuing drive to answer Heckemeyer’s touchdown heave as senior quarterback Cameron Marchi hooked up with junior wide receiver Isaiah Davis on a screen pass for 70 yards and the score.

Davis hauled in another touchdown pass the following quarter to give the Indians a 34-7 lead from 28 yards out, which allowed Isaiah to finish as the game’s leading receiver with 116 yards on only four receptions. This was the first time all season Davis has led a game in receiving yards.

Marchi completed 75% of his 12 passes for 167 yards, three touchdowns and zero interceptions as his other score through the air was to senior wide receiver Kannen Turley. Kannen’s touchdown grab put the Indians up 41-7 as he broke off a 25-yard touchdown run on a jet sweep at the end of the first quarter.

“It’s always good when we have balance between as many skilled guys as possible. Kannen usually has the big night yardage wise, but they’ve been fairly equal in touchdowns,” Eckley said. “Both of them played with good effort and really good confidence. When they got the ball, they expected to make the play and didn’t get caught.”

Williams scored his third and final touchdown in the final three minutes on a 14-yard run, and he has now scored at least three times in the last three games. Tony was joined in the backfield by senior running back Joshua Wehrenberg, who paced Williams with 132 yards on 12 attempts.

Wehrenberg entered the season as Jackson’s third-string running back behind Williams and sophomore Jason Goodman. After Goodman suffered an injury versus Poplar Bluff in Week 3, Wehrenberg has served as a nice change-of-pace running back Coach Eckley enjoys having in his offense.

Defensively, the Indians held Sikeston to just 105 total yards as Heckemeyer threw for 104 on nine attempts before exiting the game with an injury after being sacked by junior defensive end Tony Terry. Terry recorded a team-high eight tackles for the Indians with one being for a loss.

Overall, Jackson’s defense forced Sikeston into seven three-and-outs as Bulldogs sophomore running back Keodrick Sherrod led his team in rushing with only 22 yards on 13 rushes.

Backup sophomore quarterback Kayden Craig also finished with positive yardage for Sikeston with six on three attempts, while Heck-emeyer had negative 12 and Green minus eight.

Indians sophomore outside linebacker Fisher Stevens brought down Heckemeyer for a sack on top of his six tackles, while fellow outside linebacker Ryley Styer pressured him twice. Senior defensive end Mark Brakhane finished second in overall tackles behind Terry with seven, while senior inside linebacker Jacob Farrow tied in third for tackles with Stevens at six.

“Defensively, I thought we played better than we did last week, and I thought our linebackers played better,” Coach Eckley said. “Our defensive line was still physical and active. We were disappointed on their touchdown pass, but they made a play with a good pass and catch. We just didn’t play good enough defense in the secondary — we’ll go back and look at that to see if we can improve.”

Jackson (5-0, 3-0 SEMO) is now one win away from claiming its fourth-straight SEMO North Conference Championship. The only conference game the Indians have left is versus Farming-ton (4-1, 2-0), which only beat Cape Central (0-4, 0-2) 21-0 last week.

“We talked to our seniors about where this could be a deal where they could be conference champions all four years of high school,” Coach Eckley said. “Last year’s seniors couldn’t say that, so they have an opportunity to one up them.”

This Friday, Jackson will host Class 3 Cardinal Ritter (3-2) as both teams didn’t have an opponent this week. These teams were originally scheduled to play Oct. 15, but they decided to move the game to this week in order to avoid having an off week.

Both schools are “actively searching” for a Week 8 opponent, but if neither team can find one then Jackson will travel to Cardinal Ritter for a rematch.