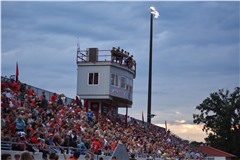 Two weeks ago on the Jackson football team’s homecoming game against Battle on Sept. 27 at The Pit, people from Jackson were accused of racial discrimination, sexual assault and vandalism against the visiting school.

Most of the accusations against Jackson came via social media, which has now been classified as “second or third-hand information” from people who were not in attendance at Friday’s game, according to Battle’s Community Relations Director Michelle Baumstark.

Several comments were made to The Cash-Book Journal’s Facebook post that announced Jackson had defeated Battle. Fans from Battle commented that Jackson fans had used racial slurs against the players and cheerleaders, while there were also comments accusing Jackson students of smacking Battle cheerleaders on the buttocks.

Comments like these were used by media outlets in Columbia for stories “as opposed to finding out the facts,” Jackson Superintendent Dr. John Link stated.

Link learned about the accusations while he was attending a volleyball tournament at St. Joseph’s Academy on Saturday. Link received a text message asking if he had seen the comments made online.

“We had [members from our Central Office Cabinet] checking on some posts, some checking on others and making some phone calls contacting [Jackson Athletic Director] John Martin,” Link said. “I asked [Martin] to reach out to the Battle Athletic Director, and this was early Saturday evening.”

Battle’s Athletic Director, Alexander Huck, told Martin he was unaware of these accusations the day following the game.

Link and other members from the Jackson school district investigated the matter by talking with parents, other administration members and school resource officers who were on the visiting sideline. Link and Martin also spoke with two referees from the game, who also heard nothing that was alleged except for “chirping” between the teams.

At halftime of the game, Battle’s coaching staff reported to Jackson officials that their locker room had been vandalized. One fan from Battle in attendance reported to Jackson ICU Coordinator Justin McMullen, who is African American and oversees the student section during home games, that racial slurs were being used.

McMullen is not the only member from Jackson watching over the visitors side as Jackson Principal Dr. Seth Harrell, Assistant Principal Brad Berry and members from the junior high administration are also in attendance during every home game. Jackson also has at least one or two resource officers always patrolling the visiting side.

Link spoke with McMullen after the allegations came out, who said that he was disappointed in how players from Battle were acting towards Jackson’s student section. McMullen had to address Battle’s players for using foul language at students and told them, “You aren’t going to talk like that with me standing here.”

Link has known McMullen for five years and said that he is not the type of person who backs down, so if he had heard any racial slurs he would have dealt with it.

Baumstark further stated in an email that, “There may have been some comments between players during the game for which we are working to gather additional, specific information, but no one is reporting any chanting, taunting or harassment from the crowd as a whole. There are, however, accounts from Battle athletes and parents regarding inappropriate individual comments made toward them by other individuals from Jackson.”

Martin and Battle Assistant Principal Rachel McCarthy, who was with the team that night and did not report any use of racial slurs by Jackson fans during the game, took photos of what had happened to Battle’s locker room. Link stated Battle reported that, “[someone] turned over their stuff, emptied their pockets out and stole their cell phones.”

Link and company offered to ping the cell phones that were declared stolen, but no cell phone numbers were offered to be searched for.

Jackson assistant principals and student resource officers reviewed footage from security cameras that are placed outside the hallway and outdoor entrance to the locker room.

Link confirmed they saw no one except for members from Battle in or out of the locker room during the game. The doors to the locker room were also locked while Battle was on the field.

Jackson Assistant Principal Travis Wilson offered the Battle coaching staff to review the security footage, but they declined to do so especially since it was a near four-hour drive back to Columbia. Link said he wishes they would have since it might have resolved the issue.

“We believe that it had to be done by them because no one else was in there,” Link said. “They’re saying it wasn’t them — he said, she said. That’s fine let’s move on. The locker room was cleaned up and there wasn’t anything that couldn’t be fixed.”