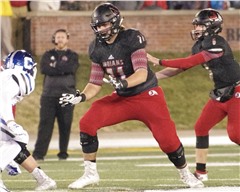 Most high school athletes are only able to dream about receiving offers to play for the top college programs in the nation, but the Jackson football team’s three-year starting left tackle junior Connor Tollison is currently living said dream.

Tollison recently narrowed down his offers and made a top seven that included college football programs like seven-time national champions Oklahoma out of the Big 12 Conference and Southeastern Conference schools such as in-state Missouri, Ole Miss and Texas A&M.

After releasing his top seven, Tollison still let other programs know he was 100% available to still be recruited, which led to arguably the best program in college football history to come knocking on the door.

On Wednesday, 17-time national champions Alabama officially offered Tollison a full-ride scholarship, and this forced Tollison to increase his top schools to eight. Aside from competing for a national title every year, the Crimson Tide also had the most players on active rosters in the National Football League out of any college football program with 56 in 2019.

Tollison was able to speak with Alabama’s head coach Nick Saban over the phone the following day, where Saban simply wanted to get to know more about him. Saban has led the Crimson Tide to win five national championships since 2009.

“[Saban] just asked me what I was into and stuff,” Tollison said. “The guy who recruits players in Missouri talked with me and likes to hunt and fish. He said he had watched my film and thought I was one of the best offensive tackles in the country. He thought I could have a future playing tackle or any position on the offensive line.”

Before taking the head coaching job at Alabama in 2007, Saban coached the Miami Dolphins for two years after winning a national title at Louisiana State University in 2004.

“To talk to [a coach] like that was just mind boggling really,” Tollison said. “As a kid you think, ‘Wow, Nick Saban!’ Then you actually get to speak with him on the phone. It was awesome.”

Tollison, who was named to the Missouri High School Football Coaches Association Class 5 All-State team for the second-straight year, said receiving offers from programs like Alabama and Oklahoma give him a sense of accomplishment. Tollison has played and started for Jackson ever since he was a freshman as the Indians have finished 32-5 overall with him protecting the quarter-back’s blind side.

With Tollison on the offensive line, Jackson’s starting quarterback has gone on to earn Class 5 All-State honors as former Indian Cooper Callis did so in 2017, while fellow junior Cael Welker has earned first-team honors in both 2018 and 2019.

The last two years, Jackson  has gone undefeated in the regular season back-to-back while also winning two-straight SEMO Conference and Class 5 District 1 Championships. The Indians reached this year’s Class 5 state title game, but they fell short to Carthage 27-21 in overtime.

“Going all the way back to junior high football, you dream about it, ‘Maybe one day I’ll be there,’” Tollison said. “Then people are like, ‘You need to make sure you go to school. [Those dreams] are a little too much.’ Now for all of that to actually be happening is not like a, ‘I told you so,’ but it’s a sense of accomplishment. If you set goals, you can reach anything really.”

The other schools Tollison has in his top eight include Kansas State, Southeast Missouri State and Tennessee, but he also received an offer from Minnesota on Thursday.

Now that a team like Alabama is in the mix, other national-championship caliber programs could start to offer Tollison since five from the SEC including Kentucky have done so. Teams who compete with each other tend to offer the same recruits, Tollison said.

“After Missouri [offered me], other SEC schools like Tennessee and Ole Miss came along, and that’s just kind of how it goes,” Tollison said. “It’s all about winning your conference, so those five SEC schools are the ones competing to win the conference. They’re not going to let somebody steal a player.”

Tollison said his recruitment process has certainly been a life-changing experience, especially since there are probably people from out of state who now know who he is. Tollison also said people continuously ask him where he will decide to play football, but he’s more focused on living in the present.

Tollison, who currently stands at 6-foot-5 and weighs 305 pounds, said he was able to gain exposure by attending individual camps in the summer like at Lindenwood and Mizzou. Tollison said there were over 50 Division-I coaches at the Lindenwood camp, where he was able to start building relationships.

Tollison plans to have his recruitment process over with before the start of his senior football season, so he plans on committing to a school in July or August.

Over the weekend, Tollison visited Oklahoma and will follow that up with a visit to Alabama this weekend. At the end of the month starting on March 27, Tollison will visit Kansas State and then Missouri on his way back home.

Tollison has not received an official offer from this school yet, but he could be visiting Illinois on April 4. He does plan to visit Ole Miss and Tennessee on Easter Weekend and will fly to Texas A&M after that.

“I visited Mizzou and Louisville [earlier], and Mizzou was great,” Tollison said. “There were six, seven players there, so I got a lot of one-on-one time with the coaches. It was good to meet everybody. … Louisville was good, but I just didn’t feel like it was the school for me.”

Tollison will make his decision based on these interests: player-to-coach relationships, facilities [field, weight room, locker room] and how the school is itself [academics, tutors, etc.].