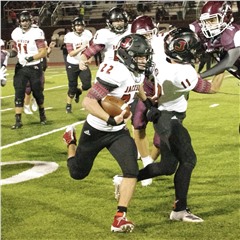 For the first time in Brent Eckley’s eight years as the Jackson football team’s head coach, the Indians were able to win the SEMO North Conference Championship for a second-consecutive season.

Jackson did so in commanding fashion by defeating conference opponents with a combined score of 191-33 this year, lastly besting conference and Class 5 District 1 foe Poplar Bluff 68-19 last Friday night on the road.

“[Winning back-to-back conference titles] is huge because it’s not easy being in this conference,” Coach Eckley said. “It speaks a lot to how hard [our players] have worked to be able to be consistent like this. When you’re a defending champion anytime, you beat the team the year before — you’re circled on their calendar.”

Although Jackson’s defense gave up a season-high 19 points, the Indians were able to score a season-high 68 points by continuing to show balance with five touchdowns through the air and five on the ground. Jackson also recorded 609 yards of total offense on 76 plays.

Junior quarterback Cael Welker accounted for six of the Indians scores by tying his season-high touchdown passes of five and running one in. He threw for a total of 352 passing yards on 36 attempts with a completion percentage of 69.4%.

“[Our flow offensively] in the first quarter was really good and then in the second quarter I don’t really know what happened,” Welker said. “We kind of messed around a little bit and got a lot of penalties called.”

This was the fourth-straight game where Welker has thrown touchdowns to multiple receivers. Welker connected with wide receivers senior Luke Starzinger and sophomore Kannen Turley for two touchdowns apiece while also finding senior wide receiver Dalton Skrob for one.

“It feels really good to have that kind of depth at receiver because it’s not like I only have one guy to throw to,” Welker said. “When teams scout us, it’s not like, ‘They only have one, so we’re gonna double cover him.’ Everybody is getting the ball, so it makes it harder for defenses because they can’t just focus on one guy. It feels really good for me because I can throw to all of them, and  I believe in all of them.”

Welker finished with negative rushing yards for the first time this season at 17 yards lost on eight carries since Poplar Bluff’s defense was able to record two sacks. Welker also had to recover a bad snap 14 yards behind the line of scrimmage.

“If I was going to rate [Welker] tonight, I’d say probably a seven or eight because I think he can play better, but he did some really good things, too,” Coach Eckley said. “He’s never in a rush, he’s always on time, and he got banged around a little bit there in the second quarter. We talked a little bit about that, and I thought our offensive line played cleaner in the second half.”

McDowell finished second for Jackson in most tackles this week with 11 while also rushing the quarterback three times and forced a fumble. Leading the Indians in tackles was Norman with 12, 10 being solo stops, along with two tackles for a loss.

Tying for the third most tackles was senior inside linebacker Riley Pike and senior safety Caleb Craft as each defender had seven stops.

“I thought our defense did a really nice job especially early — we had four or five-straight drives where we made Poplar Bluff’s offense go three-and-out and got the ball right back,” Coach Eckley said. “That’s hard on the other team’s defense because they had to go back out on the field again. That was the difference in the game.”

The Indians defense also continued their streak of not allowing for an opposing player to rush for 100 or more yards as the Mules finished with 137 yards on the ground as a team.

Poplar Bluff’s leading rusher was senior running back Ryan Colvin with 54 yards on four carries as he broke off a 54-yard run on the team’s first scoring drive.

This was in the second quarter after Jackson had already taken a 35-0 lead as Colvin had a clear path to the endzone on his run but was tracked down by McDowell.

Welker threw three of his touchdowns before Poplar Bluff scored its first touchdown of the game as he found Starzinger for his two and Turley for the other. Welker’s touchdown run came on the opening drive of the game.

Starzinger finished with a game-high 92 receiving yards on five catches with his two scores, and he also found paydirt on a 12-yard run off the jet sweep to give Jackson its 35-point lead in the second quarter.

Welker said the offense’s goal heading into the game was to score 49 points in the first half but the unit only came away with one more score before halftime as he found Skrob in the endzone from 7 yards out.

Down by 35 points once again at 42-7, Poplar Bluff was able to find the endzone a second time in the first half after sophomore Jacob Baller picked off Welker inside the Mules’ 10-yard line. This was only Welker’s third interception this season as he threw eight as a sophomore.

An unsportsmanlike conduct penalty on Jackson allowed for Poplar Bluff’s drive after the interception to continue, which led to Carr hitting Baller in the endzone for a 16-yard touchdown.

Carr was only able to complete eight of his 31 passing attempts (25.8%) for 108 yards and his two touchdown throws while managing to not be picked off by Jackson’s defense. The Indians secondary was able to come up with a total of six pass deflections as sophomore cornerback Blake Blackman had two.

To start the second half, senior running back Seth Waters scored the Indians third rushing touchdown of the night on a 6-yard run. He accounted for 246 all-purpose yards running, receiving and returning the ball on a total of 21 touches.

“[Waters] had a really good night — he was always open,” Welker said. “He finds a way to get open, and when you’re open you’ll get the ball, so he got the ball a lot tonight.”

It only took four plays on Jackson’s next drive for the Indians to score once again as Welker found Turley in the endzone for 6 yards to give his team a 55-13 lead.

The Mules scored their final touchdown of the game on the following drive as the defense allowed another 50-plus yard run as senior running back Austin Tinsley scored with a 61-yard gain.

On the next drive for the Indians, Waters broke off a 28-yard run for his final snap of the night. This allowed sophomore running back Joshua Wehrenberg to find the endzone for the first time since Week 4.

Wehrenberg did so with a 3-yard run to give Jackson a 62-19 lead with a little over eight minutes left in regulation. He later scored the Indians final touchdown of the night off a 14-yard run as he finished with 37 yards on seven attempts.

Jackson (7-0) will travel north to face Hillsboro (3-4) this Friday night, which fell to Farmington 48-0 in Week 3. The Indians defeated the Hawks 56-0 last season at The Pit. Jackson will then host Parkway Central (1-6) in the final week of the regular season on Oct. 25.