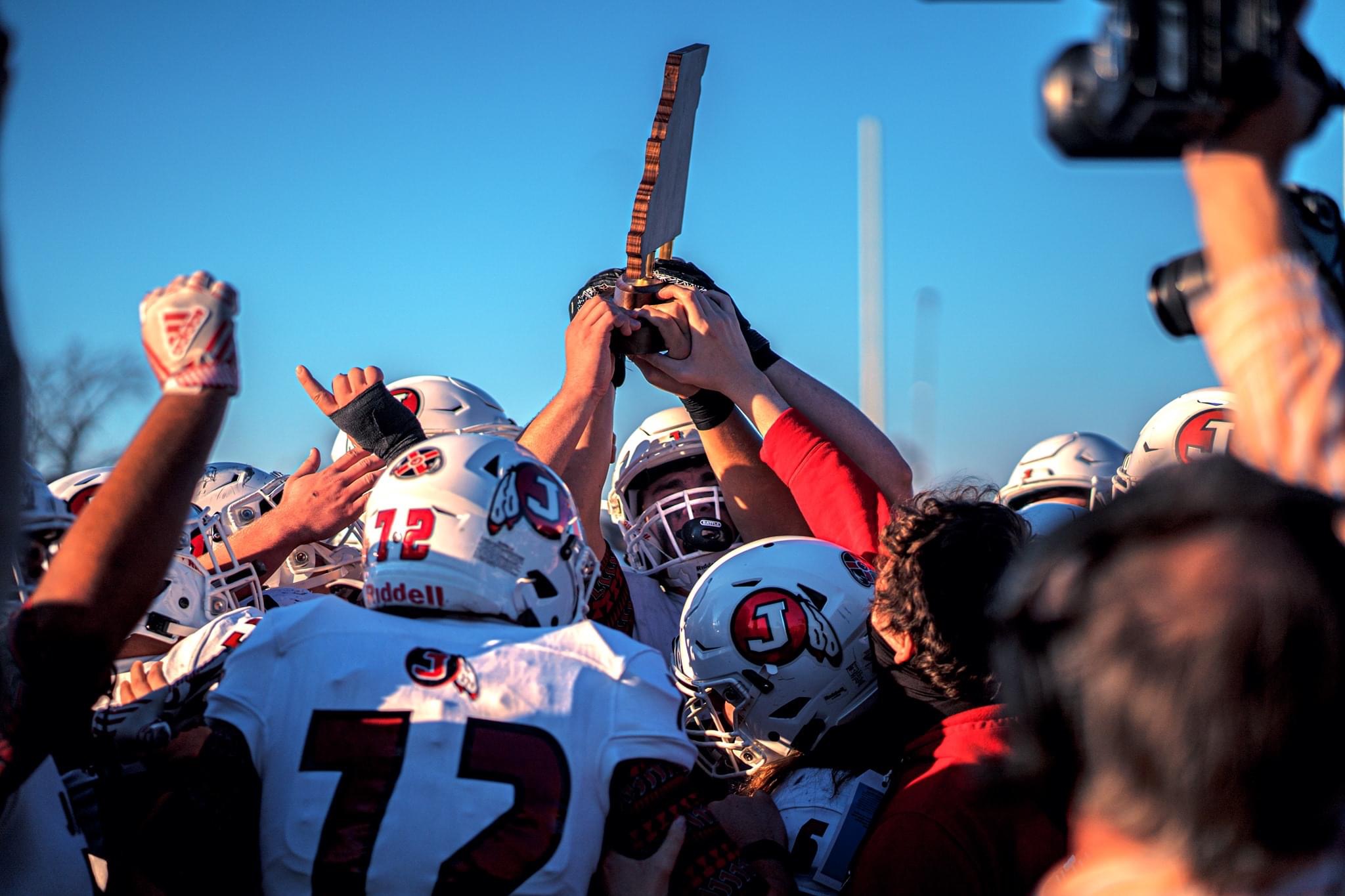 Back in 1895, Jackson played in its first-ever high school football game. Fast-forward 125 years to this past Saturday, the Indians at last won their first state championship in school history.

Jackson had played in the state title game on three separate occasions and lost each contest by no more than six points, including last year’s 27-21 defeat at the hands of Carthage.

Following the Indians 49-14 win over Ft. Zumwalt North in the state semifinals on Nov. 27, Jackson head coach Brent Eckley simply said, “We do not want to repeat history.” This team answered Eckley’s wishes by making history.

Jackson (14-0) defeated Platte County (12-2) to win the Class 5 State Championship in dominate fashion with a final score of 42-7. This also completed the Indians streak of winning each post-season game with a running clock in the second half by holding at least a 35-point lead.

“I’ve had [these seniors] for three years at the varsity level — it’s tough to put into words all the work that’s gone into [winning a state championship],” Coach Eckley said. “These guys have been tough, physical and committed. There’s nothing negative I could say about them.

“They’ve been super focused, and you look at this week we’ve had our best practices. It’s been a ball coaching these guys.”

Jackson went up 35-0 over the Pirates when senior quarterback Cael Welker threw the final touchdown pass of his high school career with four minutes, 44 seconds left in the third quarter. Welker hooked up with junior wide receiver Kannen Turley on a 10-yard out route in the end zone for the score.

Welker had one other touchdown pass in the game as he connected with Turley in the first half to give the Indians a 14-0 lead. This was four plays after Welker had found sophomore wide receiver Isaiah Davis for a 27-yard score that was called back due to a penalty.

The Indians had a holding penalty called on the next play to push them all the way back to Platte County’s 44-yard line. However, Jackson only needed 41 yards to score three plays later as Welker found a wide-open Turley for the touchdown.

Throwing the ball, Welker finished 17-of-21 (80.9% completion percentage) for 165 yards along with his two scores and finished his senior campaign without throwing an interception. Welker is the first starting quarterback in Jackson football history to not throw an interception.

“Leaving a legacy means a lot — [winning state] is a dream come true for all of us seniors,” Welker said. “… We went through the season saying we didn’t know if we were going to play two games, five games or the whole season. We ended up getting pretty lucky playing the entire season, and it ended how we all wanted it to end.”

Jackson had another score called back on its second offensive drive as Welker was able to find senior wide receiver Ty Moran for what would’ve been a 14-yard touchdown. However, the referees said there was an ineligible man downfield for the Indians.

Jackson’s offense had seven plays after Welker’s touchdown pass to Moran was called back and even got the ball to the 2-yard line, but the unit failed to score.

Overall, the Indians were called for 13 penalties that equaled 120 yards compared to the Pirates only having five flags thrown against them for just 30 yards.

“I was very frustrated with the penalties,” Coach Eckley said. “It is what it is. You’d like to think you’d get in the state championship game and not have a lot of penalties, but we just didn’t do a good enough job adjusting to how they were calling it.”

Besides Welker being able to have success through the air, Jackson’s rushing attack was another reason why penalties weren’t able to have an impact on the outcome. The Indians combined for a total of 250 yards as senior running back Daniel Dickerson ran for 188 of those and scored two touchdowns on 22 attempts.

Dickerson’s partner in the backfield sophomore Tony Williams only carried the ball seven times in favor of Daniel for 51 yards and no score, while Welker finished second in rushes with nine for 12 yards and one touchdown.

Dickerson first scored on Jackson’s second play of the game as he broke off a 75-yard touchdown run with 8:54 left in the game. The final score of Dickerson’s career came in the fourth quarter off a 2-yard run with less than five minutes left before the Indians were crowned state champions.

Jackson wasn’t able to have Dickerson play in last year’s state title game against Carthage as he suffered a torn ACL early in the 2019 season. It’s safe to say Dickerson made a full recovery as he finished with a team-high 1,228 yards and 21 touchdowns off 137 attempts.

Offensively, Jackson produced 415 yards to Platte County’s 161 as Turley finished with a game-high 97 receiving yards and two touchdowns on his four catches. Turley finished as the Indians leading receiver for the second year in a row with 63 catches, 1,273 yards and 19 touchdowns.

These five offensive lineman — including contributors like senior Cameron Byrd and sophomore Clay Doza — were one of the reasons why Welker didn’t throw an interception this season and completed 72.2% of his passes for 2,508 yards and 38 touchdowns. Welker also finished second in rushing touchdowns behind Dickerson at 15 while gaining 552 yards on 86 attempts.

“We probably won’t have another offensive line group that special — really elite,” Coach Eckley said. “They had some challenges today, too, but they did a good job finishing.”

When looking at his team’s overall play, Coach Eckley credited his defense for having a better game as the squad shutout Platte County for the first 45 and a half minutes of the game.

It wasn’t until the 2:30-mark when the Pirates were finally able to reach the end zone as senior running back Cayden Davis scored with a 1-yard run. Davis finished with 10 carries that only resulted in 30 yards.

“I thought the best execution today was our defensive players and coaches,” Coach Eckley said. “I thought they did an outstanding job. We’re a really tough defense to match up with.”

Not only was this the first and only time Platte County scored in this state championship game, but the team didn’t score at all against Webb City, 48-0, for the Class 4 state title last fall.

On top of only allowing a garbage-time touchdown, Jackson’s defense recorded four sacks, three interceptions and seven pass deflections. The Indians also blocked one punt and forced a total of four three-and-outs.

Leading all defenders in total tackles was senior inside linebacker Randol McDowell with 12 as he also recorded one of Jackson’s four sacks. Other Indians getting to the quarterback were senior nose tackle Zane Lawrence-Collier, junior outside linebacker Ryley Styer and sophomore defensive end Tony Terry.

Senior inside linebacker Bryce Norman paced McDowell in tackles with eight of his own while rushing Platte County senior quarterback Chris Ruhnke five times, and he also deflected one of his passes. Terry also deflected a pass and recorded the team’s lone fumble and fumble recovery as he took the ball out of Ruhnke’s hands during the second half.

McDowell and Norman were the only Indians to finish with 100 tackles or more as Norman led the way with 173 as McDowell finished 20 behind him at 153. They were also the only defenders for Jackson to at least have 20 tackles for a loss as Norman finished with a team-high 27 while McDowell had 26.

Leading Jackson in sacks this season was senior outside linebacker Garner Horman, who produced eight. Horman had two stops, one quarterback hurry and one pass deflection in the final game of his football career as he will wrestle collegiately for William Jewell next school year.

Ruhnke only completed 11 of his 33 passes (33.3%) for 114 yards and failed to throw a touchdown pass. However, Ruhnke was able to find a wide-open wide receiver in senior Colby Rollins near the endzone in the first quarter when Jackson only led 7-0, but Rollins dropped the ball — literally. This drive for Platte County resulted in a turnover on downs.

Rollins was actually able to make two catches later in the game for 72 yards as his last one help setup his team’s lone score of the game.

Picking off Ruhnke were junior defensive backs cornerback Blake Blackman and free safety Flint Guilliams. Blackman finished with a team-high two pass breakups, while Guilliams “put the nail in the coffin” with a 65-yard punt return for a touchdown in the second quarter to give Jackson a commanding 28-0 lead.

Blackman finished as Jackson’s leader in interceptions with five this year, while Guilliams was right behind him at four along with producing 58 stops. Guilliams was far and away the Indians top punt returner with 416 yards and two scores.

Several of the seniors on this state championship team like Tollison, who is verbally committed to Mizzou, will continue to play football. Fellow seniors like Dickerson, cornerback Dimechi Herring, Liley, Norman and Welker each have offers to play at the next level.

The last three seasons, the 2021 class has led Jackson to an overall record of 38-2 overall with three-straight SEMO Conference and Class 5 District 1 titles, and finally a state championship.

“They show up every day, and they love football,” Coach Eckley said. “That’s the thing — they love it and football is awesome to them, so that’s why they’ve been successful.”