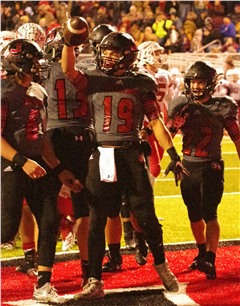 For the past two seasons, the Jackson football team has come up short in the Class 5 District 1 Championship, but that changed Friday night at The Pit.

It was a Class 5 top 10 matchup for this year’s district title as the No. 7 ranked Indians hosted No. 8 Fox to see which team would take home the title and move one step closer to Columbia.

“[Winning the district championship] means everything,” Jackson senior cor-nerback Jared Wren said. “I know last year that we really wanted to beat Vianney in this game. That was a tough loss for us all, so last week after beating Poplar Bluff we were just focused all week on this game and looking forward to Fox.”

This is also the first time in 11 years that Jackson has won 11-straight games.

“I’m really happy for the kids — our seniors have done a great job leading,” Jackson Head Coach Brent Eckley said. “They’ve earned [this district title]. They’ve been a great group to grind just going through practice, and they keep getting better. I’m proud of them. They did a really nice job tonight.”

The Indians out gained Fox offensively with 395 total yards to the Warriors 322 as 295 of Fox’s yards came on the ground.

Warriors senior fullback Bob Niebert, who also happens to be the program’s leading rusher, totaled for 129 yards and scored one touchdown on 27 carries. Junior running back Cole Elwood paced Niebert with 107 yards and a score of his own on 14 carries.

Both of these scores came in the second half as Elwood broke off a 56-yard run for his touchdown with 41 seconds left in the third quarter, while Niebert scored with 55 seconds remaining in the game to make it 42-23.

These were the only two offensive touchdowns of the night for Fox as the team’s first six score came off a kick return.

“Fox is a very mature, physical team we played against, and our defense played really tough,” Eckley said. “I’m shocked that when you look at it, they got a field goal at the end after some questionable calls to get them down there. Our defense played outstanding, and I’m really proud of them. Our coaches did a great job and made great adjustments.”

Koenig’s 17 tackles was not enough for the game-high since sophomore inside linebacker Bryce Norman finished with 20 along with two forced fumbles, one fumble recovery and one tackle for a loss.

McDowell remains as Jackson’s leading tackler with 147 stops and 29 for a loss with six sacks as Norman has 138 with 19 tackles for a loss. Koenig currently has 103 tackles, 21 for a loss along and seven sacks.

Joining the three in the front seven to play as another outside linebacker for a majority of the game was Wren, who was able to register 12 tackles and three for a loss.

“It’s something the coaches talked about two weeks ago, and we’ve been practicing and doing our half-line drill,” Wren said. “It seemed to work for us, and we looked at a couple other heavy looks, so we were really excited to try it out tonight.”

Since Fox runs a triple-option offense and usually only has one receiver, Coach Eckley knew having Wren line up in a different position would be crucial to the outcome of the game.

“I talked to Jared as well as some other players for the last couple of weeks that his matchup might be critical in us winning the game,” Eckley said. “He was super physical and just played really tough against a kid heavier than him. He held his own and that was really key.”

Moving to another position isn’t out of the norm for Wren since he converted to corner-back from safety this season.
Wren recorded 76 tackles, four pass deflections, one sack, one interception and forced a fumble last season. This year, Wren has come up with 71 tackles, seven tackles for a loss and five pass break ups thus far.

“Coach [Brad] Berry wanted somebody on the far side of the field that he knew he could count on,” Wren said. “I stepped into that role that Cole Welker left and it was some big shoes to fill. I really like it that’s for sure.”

Fox senior quarterback Gavin McGinness only had six passing attempts with two completions for 65 yards. He was also the third-leading rusher for the Warriors with 21 yards on nine carries.

Leading the way offensively for the Indians was sophomore quarterback Cael Welker, who finished with a total of four touchdowns.

Two of Welker’s scores came through the air as he found senior wide receiver Jordan Kent for both of them while scoring two more touchdowns on short-yardage runs. Kent finished with a total of four catches for 91 yards.

Welker only attempted 16 passes, completing 10 of them for 146 yards with no interceptions. He gained 66 yards on a season-high 18 carries.

“He did a nice job [tonight] — he read [the defense] well and ran hard,” Coach Eckley said. “We blocked really physically up front and finished blocks — not just offensive lineman but receivers, too. It’s not a typical game for us with our number of running attempts, but it’s just kind of what we needed to do.”

Welker has now thrown for 2,893 yards and 39 touchdowns with a 66.4 completion percentage while being picked off six times. Kent has hauled in 28 receiving touchdowns and 1,498 yards on 76 grabs.

Accounting for Jackson’s other two touchdowns was sophomore running back Daniel Dickerson on the ground. He also finished with 148 rushing yards on 21 attempts.

Dickerson’s first touchdown came off a 24-yard run with 8:02 left in the second quarter. The score came after Welker pinned Fox’s offense at its own 1-yard line with a punt.

“[That punt] was huge, huge, huge,” Coach Eckley said. “The guys did a great job covering [the punt], and Welker did a nice job there. I was frustrated because I didn’t want to give up the ball, but our defensive coaches kind of suggested we punt it there and play some field position. It worked out outstandingly.”

With Jackson still leading Fox 14-6, it took Dickerson one carry on Jackson’s following drive to take the ball 49 yards for his second and final touchdown of the game 12 seconds later.

With this win, Jackson is now one of the final eight teams playing in Class 5 and will face none other than No. 3 ranked Vianney (8-3) in the quarterfinals Saturday on the road.

Two of the Golden Griffins losses came to out of state schools while their lone in state loss was to reigning Class 6 State Champions Christian Brothers College (10-1) 70-28.

The Indians will be forced to defend senior running back Kyren Williams one last time, who has officially committed to play collegiately at Notre Dame.

“[Vianney] is big and physical up front again, but the Williams kid is really freaky,” Eckley said. “He’s a kid that nobody is tackling, but the offense goes through him. When they need yards, they put him where they need him whether it’s at receiver or running back or quarterback. … Their defense is tough, physical, aggressive and fast, so we’re going to have to play really well.”