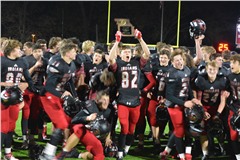 For the second time this decade under head coach Brent Eckley, the Jackson football team won its second-straight Class 5 District 1 Championship with a 29-point, 49-20 win over Fox on Friday night at The Pit.

“It feels really good to go back-to-back in my second year starting,” Welker said. “I thought we played really well tonight — [the starting offense] scored every time we had the ball. The receivers didn’t really drop the ball.”

Jackson’s offense scored on its first seven drives of the game until the second-string players took things over in the second half when the Indians had a 49-13 lead over Fox in the third quarter.

However, Jackson did trail to start the game as the Warriors took a 6-0 lead with nine minutes, 51 seconds left in the first quarter. This was after Fox’s junior quarterback Brock Inman broke off a 44-yard touchdown run.

The Indians were able to answer a little over three minutes later as Waters scored a 1-yard touchdown on a 10-play, 53-yard drive. Jackson was able to get into the redzone thanks to a 34-yard pass from Welker to junior wide receiver Rhet Liley. He finished as the Indians second-leading receiver with 50 yards on three catches.

Waters did not manage to rush for more than 50 yards in the game as he only totaled 41 on 20 carries, but since the Indians were run heavy, it set up the read option and play-action pass plays.

Jackson’s next score came when Welker hooked up with Skrob for an 8-yard touchdown off the read option on a scoring drive where the Indians ran the ball six times.

Defensively, the Warriors have three-down lineman, so they were able to drop anywhere from seven to eight defenders in coverage. This meant Welker did not have to face much pressure, but when he did, Welker either rolled out of the pocket or ran the ball himself, which he did nine times for 45 yards.

“[Fox’s] coverage was different — two high safeties, but we found ways to separate them and go straight up the field,” Welker said. “We did it multiple times in the game, so it wasn’t that difficult. I had a lot of time because they only rushed three, so I had time to look at every receiver.”

Jackson’s next score only took three plays as Welker threw to a wide-open Turley for a 35-yard strike on the right side of the field. Welker’s next touchdown pass was on the same side but near the corner of the end-zone as Waters leaped for a 20-yard touchdown.

“[Waters] went for over 1,000 yards on the season, which is outstanding when you think about it,” Coach Eckley said. “This was our 11th game, and he didn’t play running back for the first two. Then we’ve had mostly running clock games where he didn’t play any in the second half, so he’s been really effective as a ball carrier as well as catching it.”

Jackson’s final two touchdowns in the first half were scored in the final two minutes as Welker found Turley for another 30-yard touchdown off the read option. Welker’s final touchdown pass came with four seconds left until halftime from 1-yard out as he rolled right to find Turley for the score.

Turley also rushed for a team-high 53 yards on just two attempts as he broke off a 38-yard run in the second quarter to put Jackson in scoring territory.

“[Welker and Turley’s connection] has been good,” Coach Eckley said. “Cael was able to find him, and Kannen was available several different times. I thought Waters did a nice job, too, being available.

“[Waters] had a really rough start and had his ankle tweaked on his first carry, so he was trying to work his way through that. The first quarter was really shaky for him, but he’s a tough kid, and he’s a winner.”

Waters scored Jackson’s final touchdown of the game with a 2-yard run in the third quarter to bring his rushing touchdown total to 13. He also now has 1,034 yards on the ground this year.

Fox runs a triple-option style offense with three running backs in the backfield, which makes it difficult for any defense to defend because it’s hard to narrow down who will get the ball.

The Warriors offense was especially difficult to defend because their leading rusher is Inman at quarterback, but he finished the game with six yards less than his touchdown run at 38 yards on six carries.

The Indians entered the game without having allowed a single player to accumulate 100 rushing yards or more, and they continued that feat against Fox as junior running back Juhaud Thompson led the way with 69 yards on two attempts.

Even though Fox did not have a player rush for more than 100 yards, the team’s offense still combined for 224 rushing yards.

Junior running back Luke Pisoni paced Thompson with 60 yards on eight carries, while junior running back Chase Maxey only had 22 yards on seven attempts. Maxey had rushed for a career-high 213 yards with two touchdowns on 20 carries against Poplar Bluff (4-6) in the district semifinals the week before.

Meeting the Warriors ball carriers was none other than the junior linebacker duo of Randol McDowell and Bryce Norman, who combined for 29 tackles. McDowell led the way with 15 along with two tackles for a loss and a sack, while Norman finished with 14 stops and one tackle behind the line of scrimmage.

The other Indian to record double-digit stops was senior inside linebacker Riley Pike, who finished with exactly 10 tackles. Also making plays were the likes of senior defensive end Cole Amelunke and junior outside linebacker Garner Horman, who both combined for 12 tackles.

Amelunke was also able to record his fourth sack of the year for the Indians.

“This [district title win] feels better than the last one because the Fox coach was talking about how they gave up the game last year,” Norman said. “We really wanted to prove a point this year and go out and dominate the game.”

Fox only scored twice against Jackson’s starting defense as the second touchdown came when Inman found Thompson for a 65-yard strike. Thompson, who was the only Warrior to record a catch, finished the game with 107 receiving yards on three receptions.

Fox’s final touchdown was scored by Pisoni on a 3-yard run with 3:54 left in the game.

“We played pretty physically [on defense] I thought in the box,” Coach Eckley said. “Our linebackers and defensive line were really physical. Our secondary players were really kind of in a bind because there were a couple of times they were in double responsibility. They had to play pitch as well as pass, and [Fox] caught us a couple of times.

“They did a nice job game plan wise and scheme wise against us, but again our box guys did a good job. They outweighed us in several spots, but our guys played down hill and physical.”

Jackson will now face Class 5 District 2 Champions Eureka (10-1) in the state quarterfinals this Friday night at The Pit. The Wildcats lone loss came against Class 6 Ft. Zumwalt West (10-2) 23-22 in their first game of 2019.

Eureka defeated Vianney (2-9) 36-0 to win the district title after moving down from Class 6. Vianney graduated current Notre Dame football player Kyren Williams, who Coach Eckley said was one of the main reasons why the Indians fell to the Golden Griffins the last four years.

“We’re not looking at playing Kyren Williams like we’ve been for the last four years,” Eckley said. “We’re talking about one of the best kids that I’ve seen at the high school level. Nobody has him — Notre Dame has him, so we feel good about that. Eureka is a good, physical team, and they are going to play hard and disciplined. They are also well coached.”