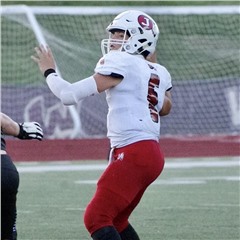 To start the 2020 season, things were business as usual for the Jackson football team as the Indians handed last year’s Class 6 state semifinalist Ft. Zumwalt West a 49-13 loss on their home turf Friday night in O’Fallon.

Jackson’s returning two-time, all-state senior quarterback Cael Welker led the offensive charge as six of his 11 completions were touchdown passes. He only had a total of 16 attempts while throwing for 229 yards and “split the love” scoring wise as two different receivers hauled in three touchdowns.

“Cael is outstanding — he made some really great plays tonight,” Jackson head coach Brent Eckley said. “He didn’t play anywhere near his best game, but he played really well. He’s just a really great quarterback, and so he can make good decisions. Even if he makes a bad decision, he’s got quick enough feet and a quick enough arm that he can get out of trouble.”

Hauling in the touchdowns were slot receivers junior Kannen Turley and sophomore Marquis Eckley, who combined for a total of eight catches and 188 yards on top of six scores. Turley led the way with 120 receiving yards while also breaking off a 45-yard run in the first quarter, which set up the Indians second score of the night.

“The down side of that is Marquis had three touchdowns and Kannen only had two, so I was hearing an earful about that. I was like, ‘I’ll get you another touchdown,’ to even out the love.”

Welker, who was only sacked once in the game after he rolled out of the pocket, used fakes to score on Ft. Zumwalt West’s defense as he hit two pump fakes and one play-action pass to do so. Each were throws to first-year starter Eckley.

“We came into the game knowing they ran cover three, and we knew we’d be able to beat them up the seams,” Welker said. “That was pretty much our game plan thinking what we were going to do all night, and it executed really well I thought.”

Offensively, the Indians recorded a total of 388 all-purpose yards as their running game wracked up 152 yards from scrimmage. Running backs senior Daniel Dickerson and sophomore Tony Williams combined for 71 yards on 12 carries as Williams scored on a 1-yard run in the second quarter.

The two touchdowns Jackson allowed both came when the Indians had a marginal lead as the first was on fourth down from Ft. Zumwalt West’s 9-yard line. The Jaguars punted the ball as sophomore quarterback Michael Ludwig fumbled the snap, but he recovered the ball and ran for a 91-yard touchdown with three minutes and 24 seconds left until halftime.

Ludwig’s score reduced Jackson’s lead to 35-6 as the Indians answered that score four plays into the second half to make it 42-6. The second score came with less than four minutes left in regulation on a 4-yard run for the final score of 49-13 to be put on the board.

Another reason why the Indians were able to win this game so decidedly was because of the quick and short scoring opportunities the defense provided the offense with. Jackson scored twice after its defense forced a turnover in Ft. Zumwalt West territory.

Jackson’s defense was led by none other than the all-state linebacker duo of seniors Randol McDowell and Bryce Norman, who combined for 27 tackles, five tackles for a loss, five sacks and three forced fumbles. The Indians finished with eight sacks as junior defensive end Chase Gray and sophomore outside linebacker Griffin Horman recorded two and one, respectively.

McDowell finished with a game-high 15 tackles while Norman paced him with 12 but did record a game-high three sacks and two forced fumbles. Finishing third on Jackson in tackles was senior outside linebacker Garner Horman as he came up with eight along with four tackles in the backfield.

“They are fast and physical. I think we have a chance again to have one of the best linebacking cores in the state, and those guys are outstanding,” Coach Eckley said.

“One of the things we talked about moving forward is if we’re going to improve, we need to be able to catch the footballs that we touch on defense,” Eckley said. “Our defense played outstandingly there’s no question about it, but if we’re going to be as good as we can be — if we touch the ball it has to be ours.”

The Indians (1-0) will be hosting Hillsboro (0-1) this Friday night at The Pit, which they defeated 56-0 last year. There will be limited attendance this year at The Pit due to the coronavirus pandemic.

As of right now, the stadium will only be filled at 50% capacity with varsity players, coaches, cheerleaders and band members each receiving four vouchers for family members. These vouchers will allow people to purchase tickets at the gate.

Tickets for students will be sold prior to games on Tuesday and Wednesday while faculty members can also sign up for vouchers on Wednesday. On Wednesday afternoon, the athletic department will evaluate the number of vouchers/tickets sold to determine how many tickets can be offered to the general public.

Face coverings are required to enter any venue in the Jackson R-2 School District for adults and students over the age of 10. They must be worn at all times while on the property when social distancing isn’t possible.

“I’m excited to get back to The Pit,” Welker said. “I don’t know how it’s going to be, but hopefully we can pack that thing as tight as we can get it for Senior Night.”