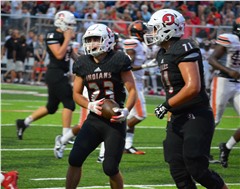 The Pit was packed for the Jackson football team’s season opener on
Friday night, and the Indians certainly did not disappoint the home crowd.

It was also Senior Night for Jackson as the team defeated Webster
Groves handedly and shut them out 48-0 with a running clock in the entire
second half. The Indians scored 41 points alone in the first two quarters.

“I was real pleased with our defense — they did a lot of good
things tonight,” Jackson head coach Brent Eckley said. “They got stuck back in
the redzone a couple times, as offensively we kind of left them hanging a
little bit. They did a nice job responding.”

The Indians defense only allowed Webster Groves to record 183 yards
of total offense with 148 of those coming through the air and only 35 on the
ground.

Leading the way defensively was none other than junior linebackers
Randol McDowell and Bryce Norman, who came up with several tackles for a loss.

Norman made arguably the play of the game in the second quarter
when the Statesmen had senior wide receiver Jacobie Banks run a slant route on
third-and-goal from Jackson’s 8-yard line.

Norman read the play and picked off senior quarterback Enrique
Quinones for a 95-yard pick six.

“It was trips right and the inside receiver ran the slant, and I
just cut underneath it,” Norman said. “I saw open grass so I ran as fast as I
possibly could. I always say in practice if I get a pick in my hands, ‘I’m
taking it to the house.’ [When I got to] about the 10-yard line, I realized I
got a pick six and passed out on the sideline afterwards.”

Jackson junior quarterback Cael Welker said with a smirk, “[Norman]
has never done that in practice,” but seeing Norman do this against an opposing
team made Welker happy.

“That was really cool,” Welker added. “I know he loved that.”

Coach Eckley usually spends most of his time talking with the
offense while his team’s defense is on the field, but he was able to witness
Norman’s interception while standing alongside Bryce’s father and one of
Jackson’s assistant coaches, Brandon Norman.

“[Brandon and I] were watching and [Bryce] made a couple cuts, and
when he made the second or third cut he had a chance,” Coach Eckley said.
“Whenever you have a defensive score it’s a special night because it doesn’t
happen very often.”

Welker also had a successful game with multiple first-year starters
on offense like senior wide receiver Luke Starzinger, who the returning Class 5
All-State quarterback was able to connect with for two touchdowns.

The first occurred with two minutes, 52 seconds remaining in the
first quarter as Welker made the option read and found a wide-open Starzinger
about five yards away from the endzone for the score.

This gave Jackson a 14-0 lead over the Statesmen as fellow
returning all-state junior, running back Daniel Dickerson, broke off a 13-yard
touchdown run to get things going in the first two minutes of the game.

This allowed Jackson’s offense to get the ball back before the end
of the first quarter, as Welker connected with Starzinger on a screen for an
11-yard touchdown.

Starzinger, who converted from running back to play wide receiver
in his final season as an Indian, was able to elude two defenders on the play.
He missed most of his junior year with an injury.

“I’m really happy for Luke because last season was rough for him,”
Coach Eckley said. “It’s tough because when you think going into the season,
‘I’m going to be the guy,’ and then you get injured. It’s tough for a teenager
to take because that’s your identity a lot of times.”

Jackson’s offense amassed a total of 432 yards as Welker only threw
for 134, but he did not play for most of the second half like many of the
team’s other starters. However, Welker did finished 11-of-16 and enjoys this
year’s crop of receivers.

Leading the Indians in receiving yards was junior Rhet Liley, who
hauled in three passes for 47 yards. Senior Seth Waters recorded one catch for
33 yards, while fellow senior wide receiver Michael Schneider had three catches
of his own for 16.

“I’m really comfortable with [my receivers] after this game because
I know they can catch now,” Welker said. “We had all offseason together, so we
were always working together. We know each other and all of us have good
chemistry.”

Jackson gained most of its yards on the ground as Dickerson led the
way with a game-high 160 yards on 11 carries with two touchdowns. His final
touchdown came in the second quarter to give the Indians a 41-0 lead with a
little over four minutes until halftime.

One minute prior to Dickerson’s final touchdown, Welker scored a
rushing touchdown of his own as he eluded Webster Groves’ pass rush for a
2-yard score.

The Statesmen came into the contest with Rivals.com three-star senior
defensive end Noah Arinze, who has 21 offers to play college football including
from programs like Mizzou and Oklahoma. However, Arinze was not able to sack
Welker on the night.

“I thought we took care of him pretty well tonight — he didn’t do
much,” Welker said. “I’ve always been able to escape the pocket and go wherever
I want. I thought the offensive line did really, really well tonight.”

Jackson had four new starters on the offensive line in the contest
as sophomore Ashton Flinn blocked Arinze for most of the game.

The Indians (1-0) will head up to St. Louis to take on Parkway
North this Friday night, which they defeated last year 35-0.