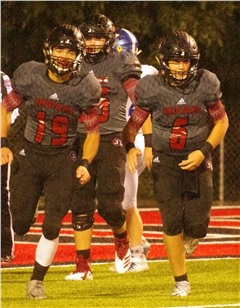 For the third time this season, Jackson’s football team was able keep an opponent scoreless, this time against Class 4 Hillsboro at 56-0 on a rainy night at The Pit.

The Indians offense was run-heavy to start the contest with the weather, which led to sophomore running back Daniel Dickerson fumbling for a second-straight game.

Dickerson’s turnover came on the opening drive for Jackson, but the defense made up for it as sophomore outside linebacker Randol McDowell recovered a loose ball to give the Indians possession at their own 11.

Jackson proceeded to score on three-straight drives as Dickerson broke off a 56-yard run two plays into his team’s second drive of the game. This put the ball on the Hawks 26-yard line as fellow sophomore running back Dimechi Herring capped things off with a touchdown the very next play.

The fumble proved to not linger in Dickerson’s mind as the running back finished with a season-high 157 rushing yards with one score on just nine carries.

“We had some adversity, and we wondered about that early on how we would handle it,” Jackson Head Coach Brent Eckley said. “We talked all week long about ball security, and then we end up with a fumble. Daniel was very frustrated that he didn’t hang onto it, but luckily he bounced back very well. He’s a kid that takes coaching, and he’s developing mental toughness.”

Heading into the game, one thing Hillsboro wanted to do was control the clock. The Hawks took nearly four minutes off the clock with their second drive, which was put to a halt by junior defensive end Cole Amelunke.

This came when Hillsboro senior fullback Hayden Voyles took the handoff as Amelunke went for the ball and stripped it right out of his hands. The lineman saw nothing but green after recovering the ball, but he was called down once he took off to run.

“I thought I was taking that [fumble] to the house,” Amelunke said. “I was so excited and everything, but then [the referees] blew the whistle. I was like, ‘Oh, man,’ but I was excited for that one.”

Even though Amelunke wasn’t able to score a touchdown, he still had a lot to be proud of since the defense recorded its third shutout of the season. He also finished second on Jackson in tackles with eight while also recording the game’s only sack.

On the sack, Amelunke was able to show off his skill as a wrestler when he suplexed Hillsboro’s senior quarterback Ethan Eckrich to end the first half. Amelunke is a two-time all-conference wrestler and qualified for the state meet as a freshman.

“[Playing at The Pit] is one of the best feelings of my life,” Amelunke said. “Rain or shine, the crowd is here no matter what.”

Three other defenders along with Amelunke and McDowell recovered a fumble as well. Senior outside linebacker Tristen Koenig was one of the three and finished with seven tackles and one for a loss.

Jackson’s defense allowed a total of 167 yards as the Hawks ran the ball 49 times out of 51 plays.

The play of Jackson’s defense allowed the offense to score without much pressure as sophomore quarterback Cael Welker threw five touchdowns, all to senior wide receiver Jordan Kent. The offense also accumulated a total of 596 yards with 399 coming on the ground.

Returning to Jackson’s rushing attack for the first time this season was junior running back Luke Star-zinger, who suffered a fracture in his foot before the start of the regular season. He carried the ball 10 times for 55 yards as Welker was second in rushing with 88 yards on just four attempts.

“It’s my last year and I feel pretty good about how this season is going,” Kent said. “I’m glad what the team did tonight with it being wet. We came out and played pretty well.”

All five of these touchdowns came in the first two quarters with the longest being a 46 yarder on a bubble screen to make it 35-0 with a little over five minutes remaining in the first half.

This marks the second game where Welker has connected with Kent for five scores this season, the first being week two against Parkway North.

Kent’s receiving touchdown total now stands at 23, which is one shy of the 24 he recorded last season to set the program record in 11 games. That mark also tied him for fifth most receiving touchdowns in a single season in Missouri history.

Kent is now 10 touchdowns away from tying the single-season record in Missouri, which stands at 33 set by Jakob Cordell in 2015.

His career receiving touchdown total now stands at 60, which puts him third all time in Missouri behind Dorial Green-Beckham (72) and one behind Luke Montgomery (61).

Kent has also scored more points (150) than Jackson’s defense has allowed all season (81).

Jackson is now 8-0 overall with one more regular season game left, which will be a road game at Parkway Central (3-5). The Indians hope to become the sixth team in the program’s 100-plus year history to go undefeated in regular-season play.